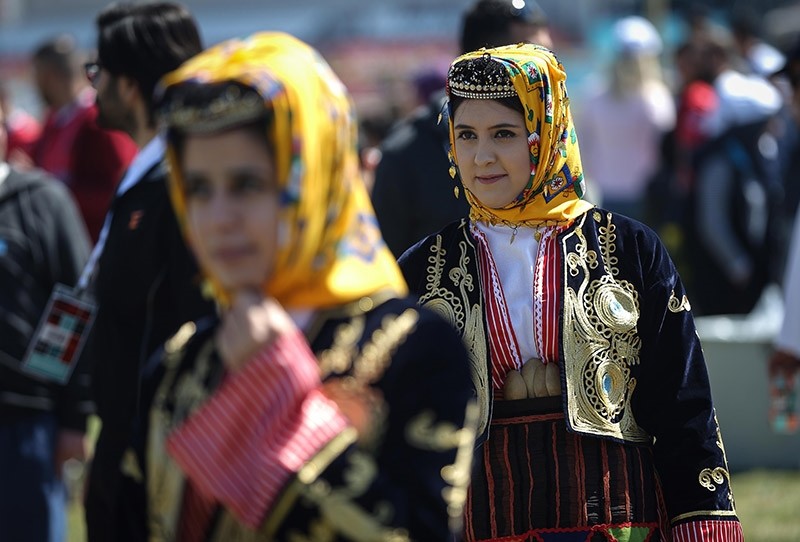 The second edition of Ethnosports Culture Festival, a bonanza for enthusiasts of ancient Turkic sports and culture, started yesterday at Istanbul's Yenikapı Square.

Organized by the World Ethnosports Federation, the four-day event offers insight into everything Turkic and the history of the Ottoman Empire.

The festival aims to promote and revive sports and cultures unique to ancient Turkic life with a total of 843 athletes competing in 11 different sporting categories.

Nearly 300 athletes will be grappling their way to glory in oil wrestling.

Meanwhile, in gökbörü or kökbörü, a traditional equestrian sport of Central Asia, riders on horseback will try to catch a runaway goat by sliding on their saddles.

In belt wrestling, which has been popular among Crimean Turks for centuries, wrestlers will try to put their opponent's shoulders on the ground by pulling on a belt wrapped around the opponent's waist.

Another unique sport originating from Central Asia, aba wrestling is one of the oldest wrestling forms in the world. To compete, wrestlers will don an "aba," a coarse woolen cloth, while trying to beat their rivals in this rare and historic Turkic sport.

In yet another Central Asian Turkic sport, mounted javelin, originally created for mounted combat practice, contestants on horseback will try to hit opponents with javelins.

In the 42 yurts set up in an 800,000-square-meter venue, ancient rituals that have survived for centuries, such as the celebration of a child's birth, will be performed.

In a section dedicated to children, young visitors will be introduced to mangala, a centuries-old board game. The youngsters will be given pony rides and theater companies will perform plays for them.

The traditional Ottoman military band, "mehter," put on a spectacular performance during the opening ceremony.

Speaking at the opening ceremony, the president of the World Ethnosports Confederation, Bilal Erdoğan, said the festival's primary aim was to "promote traditional sports."

"The idea of ethnosports and this festival first started when we set up the Archers Foundation in an area once used for practice by Ottoman archers. Efforts to promote archery turned into an endeavor to revive [ethnic sports] over time," he said.

"We would like to make these sports as popular as the Olympics events one day. The sports events on display here at the festival are not affiliated with any organization, unlike modern sports. Yet, thousands of people in Turkey watch them every year in annual events, such as oil wrestling and javelin contests," he added.

"These sports have a philosophical depth, based not only on competition and physical activity, but also on building character and spiritual development," he said.

Mentioning Western civilizations' global influence, Erdoğan highlighted that Turkey should embrace its own heritage and culture.

"We should not underestimate our heritage and play it down as a few folk dances, dishes or music. If they were actually as trivial as they were thought to be, the West's attempt to inject its own culture to replace them would not be as strong as it is," he concluded.