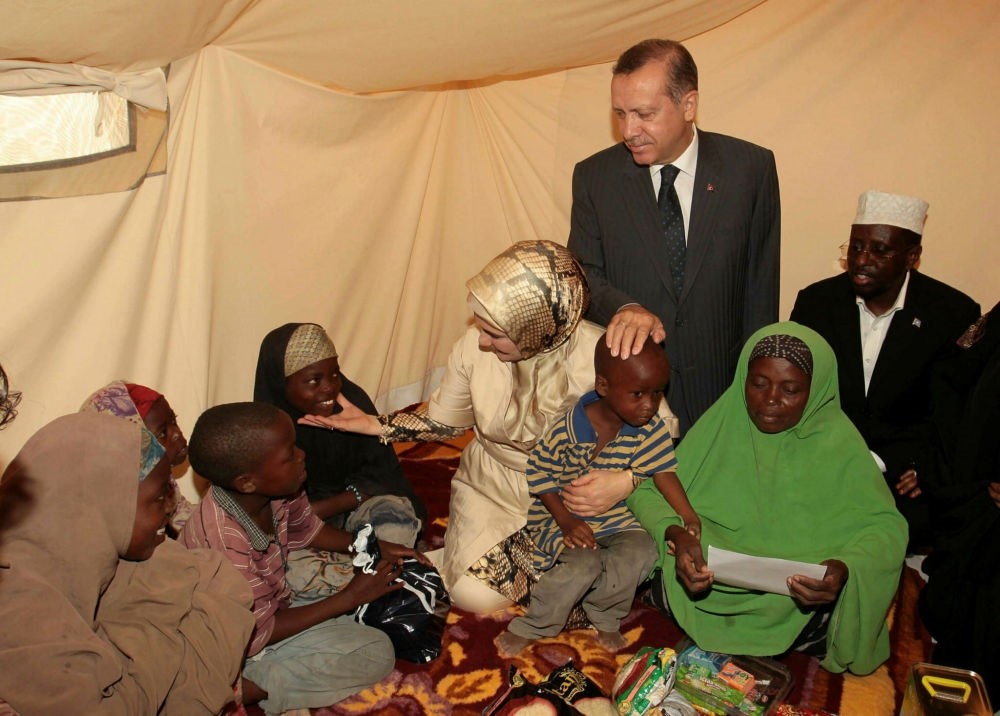 Then-prime minister Recep Tayyip Erdou011fan met a Somalian family during his visit to the country in 2011 which marked the start of a massive humanitarian campaign.
by Daily Sabah May 11, 2017 12:00 am

The country has funneled millions of dollars in humanitarian aid to Somalia and continues campaigning for its ‘African brothers and sisters,' as President Recep Tayyip Erdoğan calls them

The expansion of Turkey's humanitarian outreach over the past decade has a special meaning for Somalia, a poor African nation facing drought with hunger threatening the majority of its population. Following in the footsteps of its initiative to help improve the situation in Somalia in 2011, Turkey keeps taking the lead in aid efforts in a country embattled by a new wave of drought. As other countries joined Turkey in discussing the situation at a London conference yesterday, Ankara aimed to lead the drive to help Somalia.

Together with privately-run charities, Turkey's state-run foundations have been developing new aid projects sending cash and tons of food and other humanitarian items regularly to Mogadishu.

The Turkish Red Crescent has allocated TL 180 million ($50 million) for Somalia in batches of humanitarian aid deliveries and plans to send 12,000 tons more.

TDV, a foundation linked to Turkey's state-run religious authority, dispatches food aid and builds water wells to cover the demand for water for the upcoming decades.

Similarly, İHH, a privately-run charity, helps tens of thousands of Somalians by dispatching trucks carrying water across the country.

The Red Crescent first launched its humanitarian aid in 2011, after the then-Prime Minister Erdoğan became the first non-African leader to visit Somalia in two decades.

The Turkish charity carried out 20 aid deliveries by air and sea, dispatching thousands of tons of aid. It also set up a camp to house 30,000 internally displaced people.

Apart from food packages distributed to the poor, the Red Crescent runs mobile bakeries and kitchens. In March, it sent one ton of baby formula and kitchen utensils.

The aid agency also cooperates with Qatar's Red Crescent to clean the streets.

The Turkish Red Crescent has also built a medical school and donated construction machinery to the country for rebuilding where the renovation process of old buildings is hampered by the stalling economy.

TDV focuses its humanitarian aid to Somaliland and has delivered 1,500 food packages to families in Shirwac, Arra'ad and Togdheer. It has also built three large water wells in drought-hit areas and is working on building others in three cities.

The country witnessed famine just a few years ago and Somalis now fear a repeat of 2011, when more than 260,000 people lost their lives.

The drought poses a grave threat to three million people, according to United Nations figures and although International aid organizations have been mobilized to help Somalis but the efforts remain underfunded.

Facing a humanitarian crisis, thousands try to flee to regions not affected by drought or to neighboring countries, but the displacement also poses a risk as experts say a cholera epidemic is prevalent among women and children in the overcrowded, unsanitary refugee camps due to lack of water.

The International Committee of the Red Cross warned recently that the international community had four months at most to save millions of people in Somalia from starvation.

Since 2011, the Turkish Red Crescent has provided humanitarian aid amounting to $38 million, from food to tents and beds.

Adding aid from other state-run Turkish aid agencies, Somalia has received humanitarian aid worth $121.9 million from Turkey over the past six years. The country was the second-largest donor of humanitarian aid to Somalia last year.

TİKA, Turkey's development agency, also aids Somalia by improving the income of locals. Somalian farmers are major recipients in TİKA projects, which include the donation of tractors and training for farmers and fishermen.

TİKA has also helped with the construction of a modern hospital in Mogadishu, which was opened two years ago.

Speaking at a press conference as he left for Britain for a Somalia conference yesterday, Prime Minister Binali Yıldırım said Somalia held "an exceptional place in Turkey's heart."

"Turkey is the most staunch supporter of peace in Somalia and endeavors to maintain it without expecting anything in return from Somalia," he said.

Prime Minister Yıldırım said that the new administration in Somalia faced numerous challenges, from establishing order to fighting terrorism and all this would only be possible with the support of the international community taking concrete steps.

"The international community saw Somalia as a bankrupted state and turned a blind eye to the drama of Somalians. It was at that time President Recep Tayyip Erdoğan, during his tenure as prime minister, who visited Mogadishu and drew the world's attention to the plight of Somalians and sowed the seeds of hope for the future for Somalians," Yıldırım stated.

He said that the London conference would be "a review of the extensive work done for Somalia and future measures to help Somalia."

"We will discuss cooperation between Somalia and the international community," he said.

The prime minister also underlined that Turkey had given the most support to Somalia since 2011 for improving country's economy and security.

"Somalia and eastern Africa and Yemen face drought and hunger and Turkey immediately took steps in the face of this humanitarian crisis. The Red Crescent and other agencies delivered aid and Turkish Airlines sent a plane carrying aid donated in an international campaign," he noted.
RELATED TOPICS