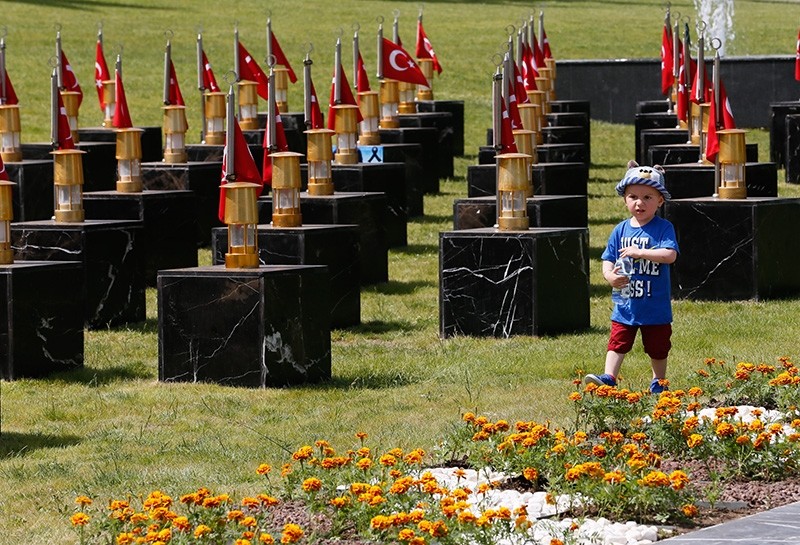 Three-year-old Hu00fcseyin Ferhat Avkau015f, named after his grandfather Hu00fcseyin and uncle Ferhat who were killed in the Soma mining disaster, walks among the graves in the miners' cemetary, May 13, 2017. (AA Photo)
by Daily Sabah with Agencies May 13, 2017 12:00 am

Miners, families of victims and NGO's flocked to a cemetery in western Turkey's Soma to commemorate the 301 lives lost in the country's deadliest mining disaster on its third anniversary.

This year, the anniversary coincided with Mothers' Day, marking a bitter day for many mothers and wives grieving and praying after their children and husbands.

Sevim Çoşkun, who lost his 28-year-old son Ismail Çoşkun in the disaster, said that their pain still lingers, and she's trying to find some consolation by hugging her son's clothes, or the Turkish flag laid onto his cascade before he was laid to rest.

Losing his 30-year-old son Hakan Uçkun in the disaster, Sevgül Uçkun said that she still keeps the rose that her son brought on Mothers' Day three years ago.

Whereas Uçkun's wife, Sibel Uçkun, spent only one Mothers' Day together with her husband. Uçkun said that who brought her two bundles of flowers, likely motivated by their then seven-month-old son.

Families and relatives of the deceased miners stated that they want justice. The public lawsuit launched against company officials and authorities three years ago is yet to be terminated, and the next hearing is set for July 11.

On May 13, 2014, a fire broke out at the Eynez mine operated by Soma Coal Mining Company and the ensuing smoke killed at least 301 workers trapped dozens of meters below while 486 others managed to reach the exit. The incident was the deadliest tragedy in Turkish mining history, and preceded another disaster which claimed 18 lives in the central Turkish town of Ermenek in October 2014.

Trade unions and NGO's also held commemoration ceremonies throughout Turkey, asking for a swift end to the lawsuit on the disaster.