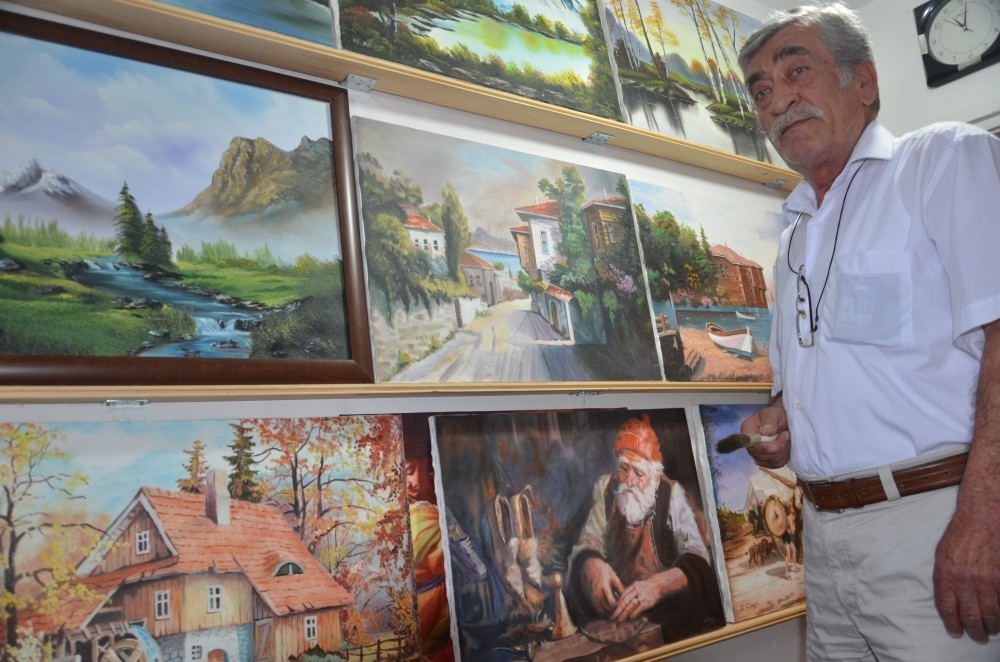 Pensioner Mithat Altay wants to honor his hero Bob Ross by holding an exhibition of his paintings.
by May 16, 2017 12:00 am
Pensioner Mithat Altay, 70, from the district of Alaplı in Zonguldak province on the Black Sea coast, who learned how to paint by faithfully following the late American painter, art instructor and television host Bob Ross, is now ready to exhibit his more than 100 paintings.

Altay said he continues to watch Ross's 20-minute tutorials on television and the internet, having transformed his attic into a studio amid efforts to put the inspiration he received from Ross, his mentor, onto the canvas. He said he had painted more than 100 landscapes in the last four years.

Having painted over 100 landscape paintings in the last four years, Altay says he has always been a fan of Ross, who died in 1995, and after retiring from his job at Ereğli Steelworks in 1999, Altay chose to chase useful pursuits as a retiree, instead of wasting his time at local coffee shops.

"However, at first I did not know where to start. I watched nothing but Bob Ross for two years to learn his technique. I then turned my attic into a studio. My dream is to open an exhibition in honor of Bob Ross," he explained.

Altay says he usually gave his paintings to friends and family as gifts.

"I recommend that retirees utilize their spare time after retirement rather than wasting it. My eyes are slowly failing me nowadays but I would also like to do a painting for President Recep Tayyip Erdoğan."
RELATED TOPICS