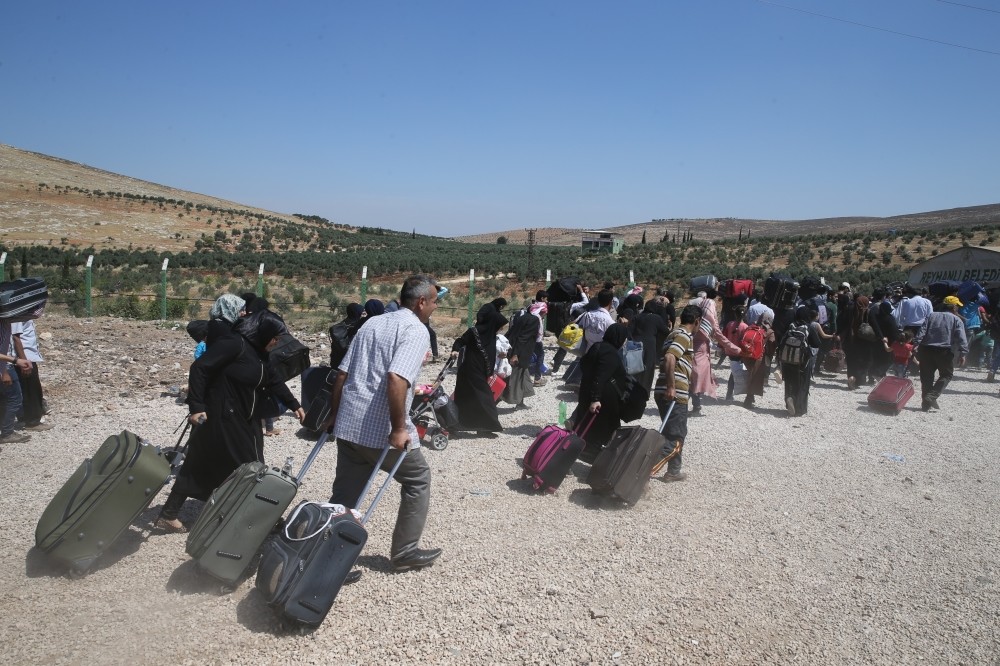 Syrians head to the Cilvegu00f6zu00fc border crossing in Hatay as thousands flock home for Eid al-Fitr.
by Daily Sabah with AP Jun 16, 2017 12:00 am

Thousands of Syrians have swarmed Turkey's two border crossings along the Turkish-Syrian border ahead of Eid al-Fitr, a festival marking the end of the Islamic holy month of Ramadan, as the country assists those who wish to return to their war-torn Syria temporarily this holiday

Despite having taken shelter in Turkey from the ongoing Syrian civil war, some refugees from the war-torn country are willingly making the journey back home, despite security risks, to observe the holy month of Ramadan with the loved ones they left behind.

For some younger refugees making the journey home, the visit means seeing their relatives, even siblings, for the first time. Ankara says those who go back can return with their papers and a special "religious holiday permission."

Official border crossings were closed in 2015; barring exceptions in cases such as serious injuries, to prevent a spillover of the conflict and to stem the flood of refugees. Ankara has also been building a wall along the border to curb the cross-border movement of fighters.

Many Syrians welcomed the opportunity to return to their native Syria, even briefly. Ismail Hadidi Jafar, 21, was waiting to cross into Syria from the Öncüpınar crossing point in the southern province of Kilis to visit his parents and family in Aleppo. He left two years ago and hasn't gone back since. "I have a young sibling [in Syria] whom I've never met," Jafar told the Associated Press (AP), while preparing to cross the border. As he waited, the crowds grew. Hundreds of refugees had to stand in the scorching sun to be individually processed by police and migration officials for the crossing. Seeing the lines, some abandoned their plans to visit, but the overall excitement level remained high.

Turkey's Anadolu Agency (AA) said since June 1, when the crossing of Cilvegözü in Hatay province opened, some 47,000 Syrians have left to visit their homes.

Öncüpınar opened for the first time on Tuesday for the Ramadan visits. AA reported that about 6,000 Syrians have returned to their country in the past two days via Öncüpınar. Local authorities have set up tents for the Syrians to reduce the risk of heatstroke, while charities delivered food for the iftar (fast-breaking) and suhur (start of fast) meals.

Ahmed Abdullah is going back home for the first time in two years. He arrived at the border crossing on Tuesday night to get ahead of the lines. "Most of my relatives still live in Syria. I am very happy to have a chance to see them again," he told AA. Like Abdullah, Marwan Sobhi arrived in Turkey two years ago and settled in Mersin, a southern city near the border. "My wife hasn't seen her father for two years, and I couldn't visit many relatives back home in two years either. I can't find the words to describe how I feel now. We are very, very happy," he told AA.

Turkey hosts nearly 3 million Syrian refugees, the largest number of all the countries in the region. It remains a safe haven for displaced Syrians, though the constant threat of violence spilling over the border has forced Ankara to restrict crossings. Turkey is a staunch advocate for the establishment of a "safe zone" inside Syria for the internally displaced, which would prevent attacks on them by the Bashar Assad regime and the Daesh terrorist group, among others. The Cilvegözü border crossing was the scene of a car bombing in 2013 that killed 13 people.

The two crossings will remain open for departures to Syria until June 23. Returns will be allowed through Öncüpınar until July 14 and through Cilvegözü until Sep. 30 but Turkish authorities reserve the right to amend these dates.

Mohammed Izzo, 28, who hails from Aleppo province in northern Syria, said he's been longing to see his family. "The area we were in was under Daesh control," he said, adding, "I haven't visited since Daesh left, so I'm going now." Izzo also said he will return to Turkey after Eid al-Fitr.