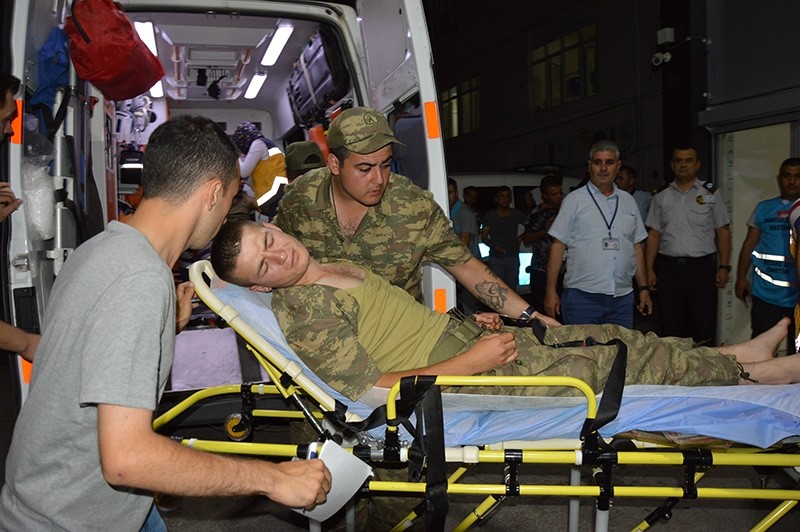 A total of 590 Turkish soldiers were hospitalized late Saturday in the western province of Manisa following complaints of nausea and vomiting. It is the latest case of mass poisoning at military bases in Manisa that have been plagued by such incidents since late May. An investigation is already underway while police early Sunday arrested 21 employees, including executives of the catering firm that provides food to the base and others in the province.

The soldiers' complaints at the 1st Infantry Training Battalion Command began following a dinner. The Manisa Prosecutor's Office said in a statement Sunday that 731 soldiers were affected by the tainted meal.

Defense Minister Fikri Işık and Commander of Turkish Land Forces Gen. Zeki Çolak arrived in Manisa to oversee the issue. Speaking to reporters after visiting soldiers at the hospital, Işık said 372 out of the 590 soldiers were transferred to hospitals while others were treated inside the military compound. A total of 72 soldiers remained in hospitals and none of them are in critical condition, Işık said.

On May 23, more than 1,000 soldiers were hospitalized in the same military compound after consuming the food and one death was reported.

On Saturday, 69 soldiers suffering from similar symptoms were also hospitalized.

Meanwhile 35 soldiers, who completed their training in Manisa and were dispatched to the Turkish Republic of Northern Cyprus (KKTC) were also hospitalized with similar symptoms in Nicosia. One remains in critical condition.

Authorities say it is too early to reach a conclusion regarding the cause of the poisoning as not all the soldiers treated for poisoning consumed the same foods. The early poisoning cases were linked to salmonella bacteria found in meals that were served at the bases. Subsequent poisoning cases reported at three separate military bases in the same city have angered the public. Social media users called for a thorough investigation while some even speculated that soldiers might have been "deliberately" poisoned.

The Manisa governorate announced yesterday that food services from the catering firm were suspended and meals will be provided to the base temporarily. Manisa Governor Mustafa Hakan Güvençer said a delegation from the Public Health Institute, the highest public health authority and a delegation from the Land Forces Command that oversees military bases hosting training for conscripts, were investigating the issue. Military compounds in Manisa function as two main training bases for thousands of conscripts who are dispatched to other cities after completing a month-long training course there.