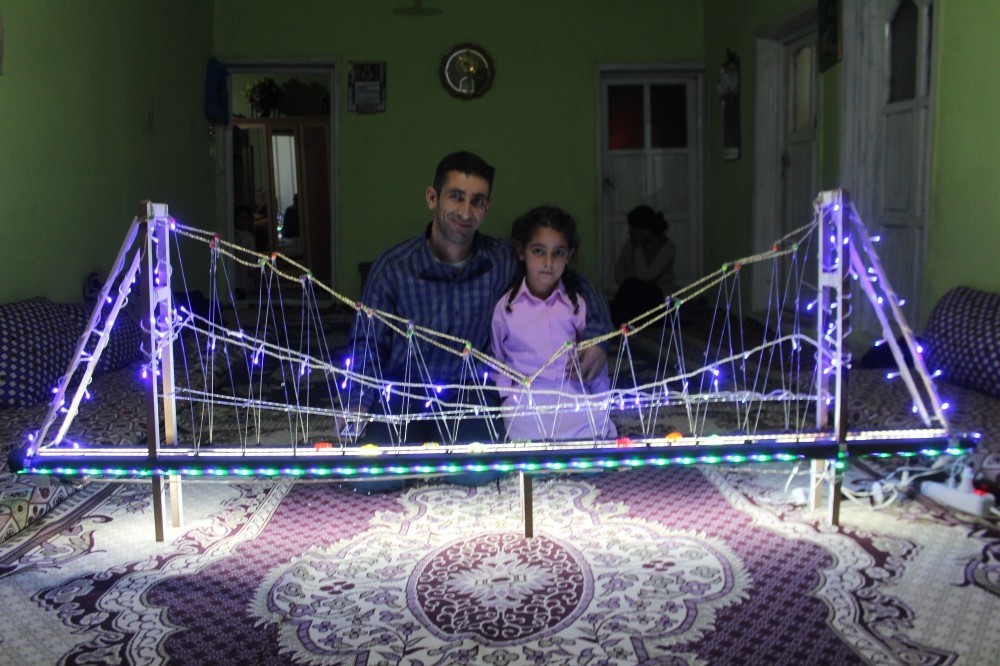 Aydın Güder, a poor father from the southeastern city of Hakkari, became a social media phenomenon when he built a model bridge out of curtain rods and umbrellas for his daughter who yearned to see Istanbul's famous Bosporus Bridge. One day after his story was picked up by local media, Güder and his daughter Yağmur, 8, were brought to Istanbul by the city municipality. Father and daughter will be the municipality's guests, and Yağmur will get to see the real bridge during their trip.

Güder decided to build the two-meter long model when his daughter told him how curious she was about Istanbul, the world-famous city and the country's most populated, located some 1,857 kilometers west of Hakkari, a sparsely populated, poor province in the southeast. "She told me she wanted to see the bridge, to hear the horns of ships crossing the Bosporus, to hear the seagulls," Güder said in an interview with İhlas News Agency on Sunday, referring to the most common images associated with Istanbul. He used a discarded curtain rod for the main body of the bridge and pieces of three umbrellas to build vertical bars on top of the bridge.

Decked out with LED light bulbs and a sound system "emitting the sound of seagulls", it was a complete mock-up of the bridge in the Güder family's humble living room. The story, released by news agencies on Fathers' Day, drew a response from the municipality as well as the Youth and Sports Ministry, and father and daughter were flown to Istanbul yesterday, with costs covered by the municipality. Speaking to reporters after she arrived at the airport, Yağmur said she was very happy and looking forward to seeing the bridge as soon as possible during her four-day stay in Istanbul. "I thank Mayor Kadir Topbaş for this opportunity. I hope every child dreaming of seeing Istanbul has this chance one day," Güder told reporters. He said his daughter was not able to sleep when he told him that they were invited to Istanbul. "She was so excited. She wants to see the bridge and the historical places in Istanbul," he said.