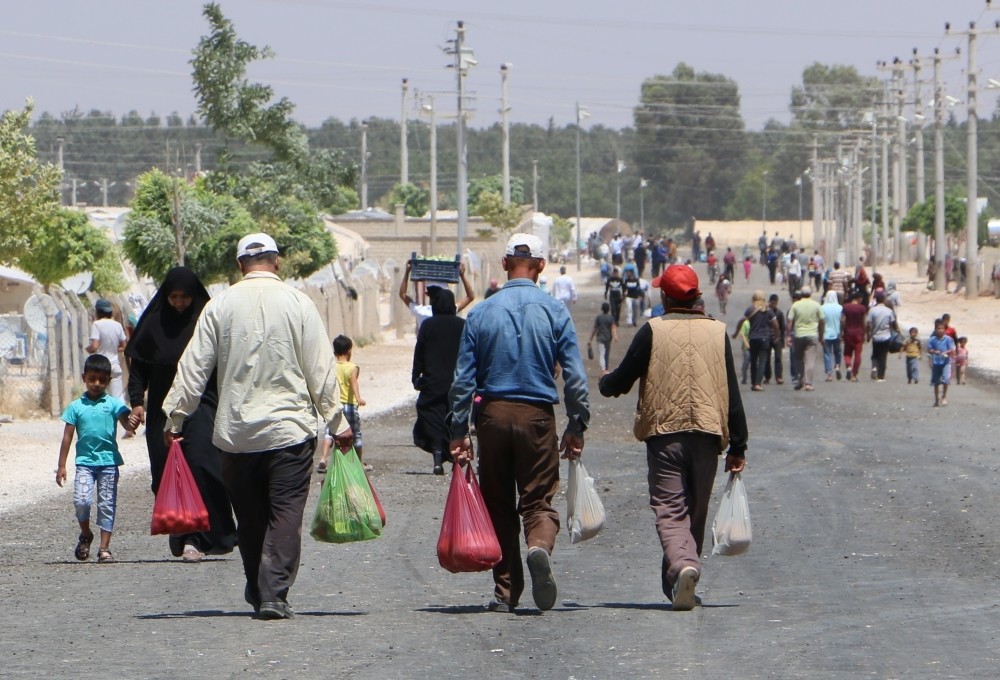 Syrian men carrying grocery bags return to their tents in the refugee camp in Aku00e7akale after traditional Eid shopping.
by Anadolu Agency Jun 24, 2017 12:00 am

In the sixth year of the conflict in their country, millions of Syrian refugees again prepare to mark an important Muslim festival far from home. Ramadan Holiday, the culmination of the fasting month of Ramadan, will start on Monday and symbolizes prosperity and happiness for those who have abstained from their basic needs throughout the month. Yet, the happiness that comes with the holiday will be bittersweet for about 3 million Syrian refugees in Turkey. Even though children who will be showered with candies and gifts to mark the occasion will likely be the happiest of all, adults might feel the pain of spending another holiday away from home again.

Abdullah Halabi is one of about 30,000 refugees staying in a camp for Syrians in Akçakale, a town on the border with Syria. "I wish I could observe the holiday in my homeland like all Syrian Muslims do, but it will obviously not be possible for some time," he told Anadolu Agency (AA). He recalled how he used to spend the holiday back in Syria, where they would wake up on the first day of the festival to perform prayers. They would then visit the graves of their loved ones to recite prayers before going on door-to-door visits to see relatives. "We cannot visit our surviving or deceased relatives anymore," he lamented, explaining that everyone has fled to other countries since the war began, or were killed in attacks by the Assad regime. He says Syrians are now accustomed to living with Turks. "I started taking up their Ramadan customs," he said, still looking forward to spending his next Ramadan in Syria "after the end of [Bashar] Assad's oppression."

Muhammad Hussain arrived in Turkey as a refugee five years ago. Like Halabi, he sadly recalls past Ramadan Holidays, but said he is happy to mark the festival with his "Turkish relatives, brothers and friends." Returning to Syria is only a dream for Hussein even though tens of thousands of Syrians have crossed back into their country over the past week since Turkey opened two border crossings. Hussain said he cannot go back to Syria because his hometown is located in an area where it is not safe to return.