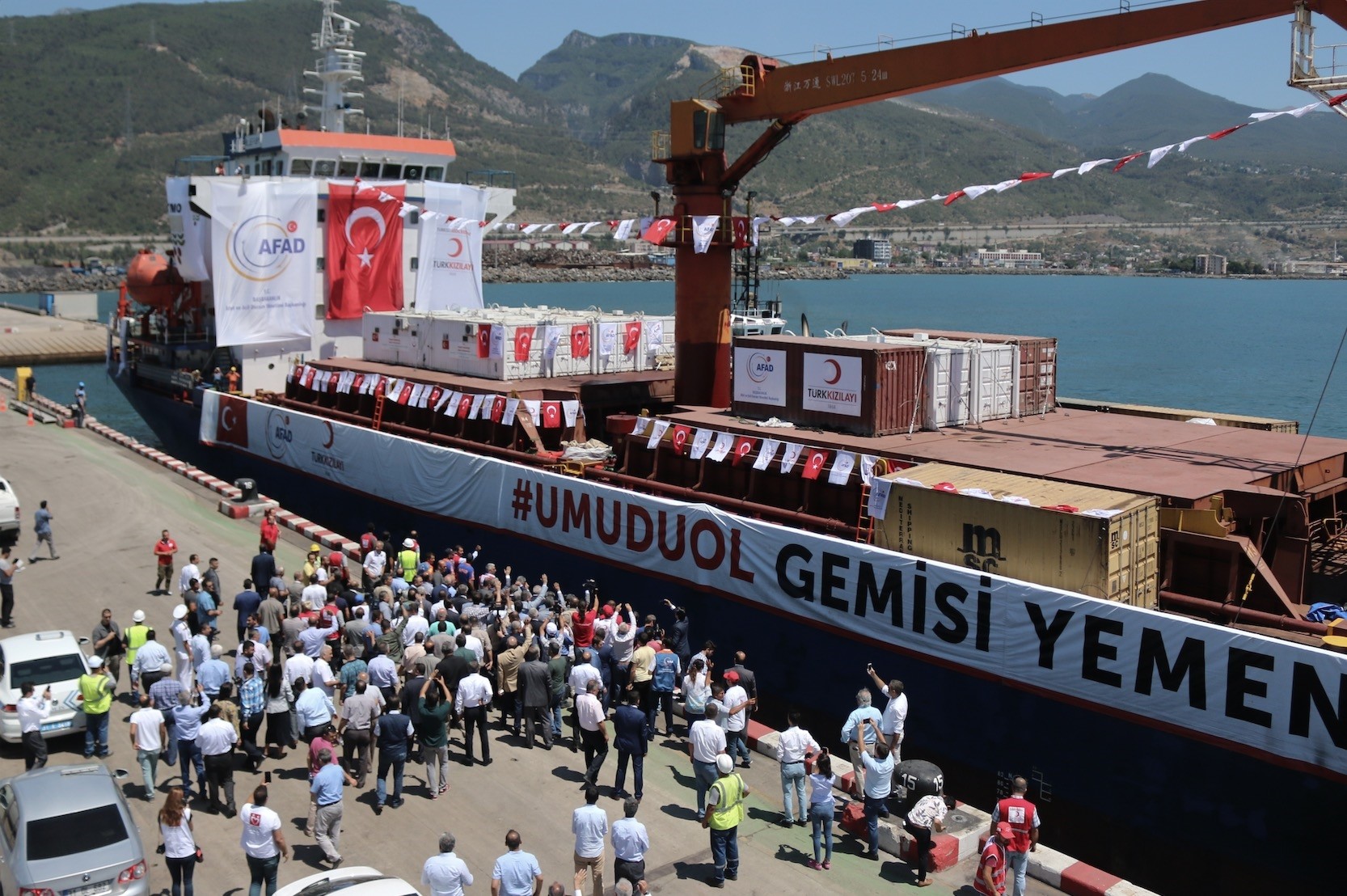 Battling a cholera epidemic against the backdrop of an ongoing conflict, Yemen receives a lifeline from Turkey, which dispatched a vessel carrying TL 20 million worth of humanitarian aid to the country yesterday

A ship carrying medical aid worth TL 20 million ($4.4 million) departed for Yemen from a southern Turkish port yesterday. The ship, sent by the Health Ministry as part of an aid campaign for the conflict-ridden country battling cholera, is the first batch of aid set to be sent to Yemen.

High-level officials, including Deputy Prime Minister Veysi Kaynak, attended a ceremony to see off the vessel sent as part of the "Become Hope For Yemen" campaign. Along with 47 tons of medicine and 70 tons of medical equipment, the vessel is carrying two fully equipped mobile hospitals. It is scheduled to arrive in Yemen in a week.

Turkey has been talking with Yemeni officials for a while to determine the amount of aid necessary for the country. Health Minister Recep Akdağ met a high-level Yemeni Health Ministry official in Geneva in May and received a briefing from the Yemeni ambassador to Ankara last month about the cholera epidemic. Medical aid was originally to be sent by air, but due to delays in flight permissions, officials decided to send it from the Mediterranean Turkish port of İskenderun.

Among the aid sent to Yemen are saline, antibiotics, disinfectants, vitamins and medicine for expectant mothers, surgery gloves and materials used to examine patients. The aid also includes devices to measure water pollution, chemicals to disinfect water and food aid.

Veysi Kaynak said in a speech at the port that they mobilized after learning the fate awaiting 300,000 children in Yemen, who would have died of cholera and hunger a few months ago, and President Recep Tayyip Erdoğan spearheaded the efforts to reach out to them. "We planned to send the ship earlier but we couldn't get permission to anchor it at Port of Aden. It would arrive in Yemen earlier if we had permission," he said.

Limited access to clean water and food in Yemen gave rise to cholera killing more than 1,500 people, and children constitute one-fourth of the deceased. The cholera epidemic has affected nearly 246,000 people in the country, while the World Health Organization (WHO) warns it is still rapidly spreading across Yemen. In the past two months, more than 200,000 suspected cases have been diagnosed, and about 5,000 new cases are reported daily. The ongoing conflict in Yemen has left 21 million people in need of humanitarian aid, while 12 million others battle disease and hunger. Some 2 million children suffer from malnourishment in a country where only 40 percent of hospitals and other health facilities operate. A shortage of medicine and medical equipment worsens the situation.

The Turkish Health Ministry also treats sick Yemenis. Last year, 183 Yemenis were brought to Turkey for treatment in a hospital in the western city of Afyon. Only 22 are still being treated, while others have recovered and returned to Yemen.

Impoverished Yemen has remained in a state of civil war since 2014, when Houthi rebels overran much of the country, including the capital Sanaa.

According to UN officials, more than 10,000 people have been killed in the war, while more than 11 percent of the country's population has been displaced as a direct result of the conflict.