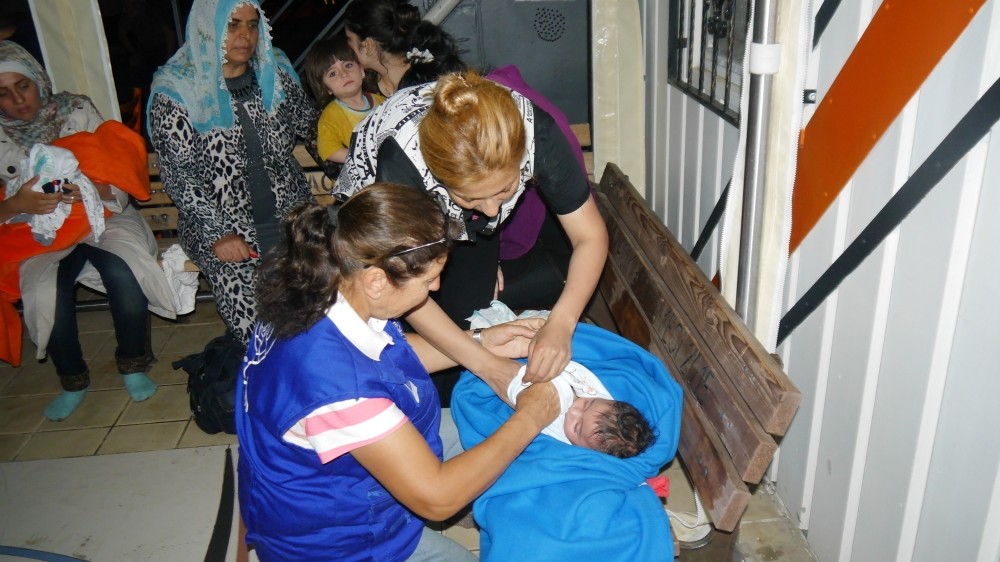 A migration official checks an infant among rescued migrants.
by Compiled from Wire Services Jul 11, 2017 12:00 am

Twenty-eight Syrian illegal immigrants traveling to the Greek island of Lesbos from the Turkish shore were rescued by the Turkish Coast Guard yesterday after their rubber boat started sinking.

The migrants called the Coast Guard when the boat's engine failed and the vehicle started taking on water some 300 meters (984 feet) from the shore of Ayvacık in the western province of Çanakkale.

Turkish troops pulled the migrants, including eight children, to safety. The migrants were taken to the shore where they were given new clothes and food.

Mustafa Rashid, one of the migrants saved by the Coast Guard, told reporters they "prayed" while they waited to be rescued and performed prayers when they stepped on the shore once again.

Elsewhere, security forces intercepted 123 illegal immigrants including 50 children in the western city of İzmir as they were preparing to board a boat to the nearby Greek islands from the district of Menderes. Authorities said the migrants were of Syrian, Afghan and Senegalese nationalities and a suspect accused of smuggling them was detained.

Turkey and the EU signed a deal last year to decrease the refugee influx from Turkey to the continent, where countries have different ideas over tighter border controls. Under the deal, Turkey agreed to take back migrants who crossed into Greece from the Turkish Aegean coast and send Syrian refugees to be settled in EU member states. Once teeming with refugees waiting to board the first boat heading to the nearby Greek islands, the Aegean shores are now calm, save for the occasional group of irregular migrants.

The Turkish Coast Guard Command has reported that irregular migration from Turkey to Greece over the Aegean Sea has dropped 96 percent in the first five months of 2017 compared to the same period in 2016.

According to the report, the number of irregular immigrants Greece declared was 156,723 from January to May 2016, and this figure has dropped to 6,372 in the same period of this year, a 96 percent decline. The report also says that the increased capacity of the Turkish Coast Guard Command played an effective role in preventing irregular immigration. Accordingly, in the first part of 2016, the Coast Guard intercepted 10 percent of irregular immigrants, but in the same period this year, its capacity to intercept increased 50 percent.

Coast Guard Command has two continuous operations, Operation of Aegean Hope and Operation Safe-Med, with the participation of 2,500 personnel, 65 Coast Guard boats, two search and rescue ships, 10 helicopters and three aircraft. The report also says that 78 human smugglers and 2,539 illegal migrants were arrested in 81 operations conducted in the first half of the 2017.

Turkey has heavily criticized the EU for dragging its feet on commitments and slowing down the process to end irregular migration. The EU foresaw the admittance of 72,000 refugees from Turkey in line with the agreement. On the financial side, 750 million euros has been allocated so far for the care of refugees in Turkey, a small part of the pledged 3 billion euros promised to the country that has been a hub for refugees from the Middle East and Central Asia due to its position as a gateway to Europe from Middle Eastern and Asian countries.