A midsummer’s nightmare: Turkey remembers martyrs who died for democracy 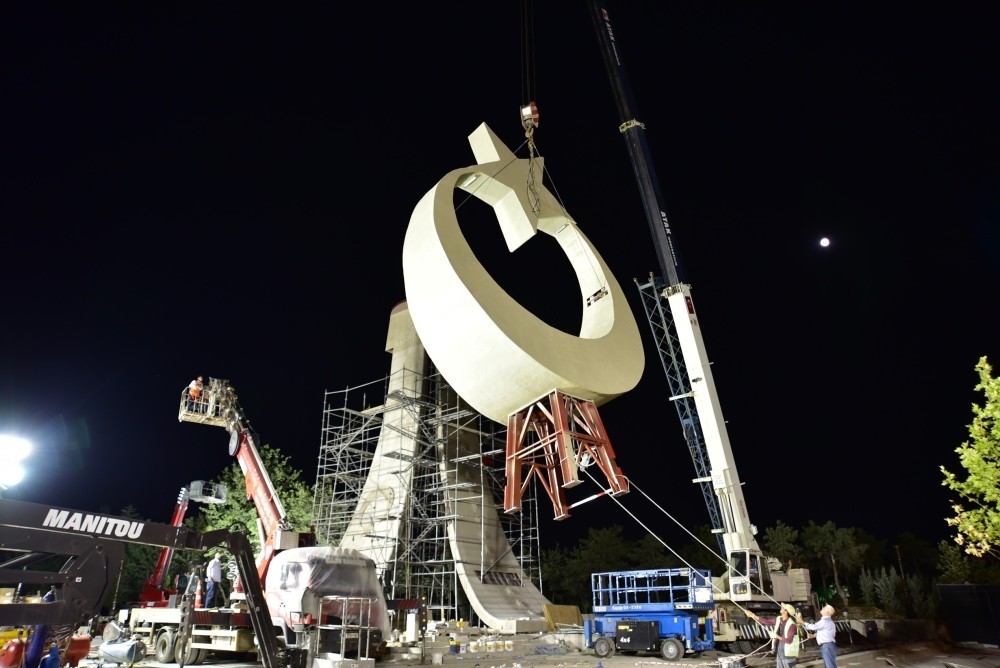 Workers install the crescent and star symbols of the Turkish flag on top of a monument dedicated to coup victims which was built across the street of presidential palace.
by Yusuf Ziya Durmuş Jul 15, 2017 12:00 am

One year on, Turkey commemorates the 250 victims of the July 15 coup attempt and celebrates the victory of democracy over the FETÖ terrorist group whose soldiers tried to seize power on July 15, 2016

This weekend, events will be held all across Turkey to mark the day that shook the democratic country at its core. The 250 people killed by the putschists while defending democracy on July 15, 2016 will be commemorated. At the same time, the country will celebrate the people's will to overcome threats against its democratically elected administration and denounce the Gülenist Terror Group (FETÖ), accused of masterminding the coup bid through its infiltrators in the Turkish army, flanked by civilian members of the group. Soon after the coup bid was quelled, Turkey declared July 15 as the "Day of Democracy and National Unity."

Commemoration ceremonies and other related events began on Thursday with vigils held at the sites of where the victims were killed. On Friday, prayers were recited at the Millet Mosque inside the Presidential Palace in the capital of Ankara for the martyrs. On Saturday, daylong events will continue up until the early hours of July 16 in line with the timeline of the coup bid. The country's Grand National Assembly (TBMM), which was bombed by fighter jets during the coup attempt, will convene for a special session of remembrance, while all lawmakers, including those who rushed to Parliament in a unique act of bravery to voice their opposition to the coup, are scheduled to attend the session.

In Istanbul, thousands are expected to attend the "National Unity March" between the city's Asian and European sides, starting at 6:30 p.m Saturday evening. The crowd will cross the July 15 Democracy and Martyrs' Bridge. The bridge, originally known as the Bosporus Bridge, was renamed in memory of coup victims after July 15. President Recep Tayyip Erdoğan, accompanied by families of the victims and survivors, will join the march. He is expected to address the crowd after a recitation of prayers and the screening of a documentary on the July 15 incidents. Erdoğan will also unveil a monument dedicated to victims at the entrance of the bridge.

At 12:13 a.m. the salah, a Muslim call to prayer, will echo throughout Turkey. It was at that exact

moment that muezzins, through loudspeakers, started reciting the prayers on July 15, 2016. Originally a call to alert the faithful of an upcoming funeral, the salah is also used to warn people about extraordinary situations. Indeed, the calls were accompanied by a message telling the public that the coup attempt was largely quelled and that the situation was "under control," calling on people to "take to the streets" for democracy. Retracing the steps they took one year ago, when people participated in the "democracy watch." Also, via a FaceTime message broadcast live, President Recep Tayyip Erdoğan called on the nation to "take to the streets" as the coup attempt unfolded.

For one month, millions of people held "democracy watch" rallies in 81 provinces every night in a show of force. The rallies ended with a one big gathering that attracted hundreds of thousands of people in Istanbul's Yenikapı district where the president, prime minister, army chief and opposition leaders were also in attendance. The rallies are set to end around Sunday midnight. Also, at 12:13 a.m. on Saturday, crowds will march from Kızılay Square in Ankara to Parliament. President Recep Tayyip Erdoğan will attend a rally in front of Parliament at 2:00 a.m. and Prime Minister Binali Yıldırım and opposition Nationalist Movement Party (MHP) leader Devlet Bahçeli are also set to attend and address the crowds. Also in Ankara, photos and videos depicting the coup night and the heroic actions of those opposing the putsch bid will be projected on the exterior of Parliament and police's elite Special Operations headquarters using video-mapping technology. Forty-two police officers were killed at the headquarters during an air attack carried out by putschists. The events in Ankara will end with a mass prayer at the mosque inside the Presidential Palace in the early hours of Sunday and the inauguration of the "Martyrs Monument" built opposite the complex.