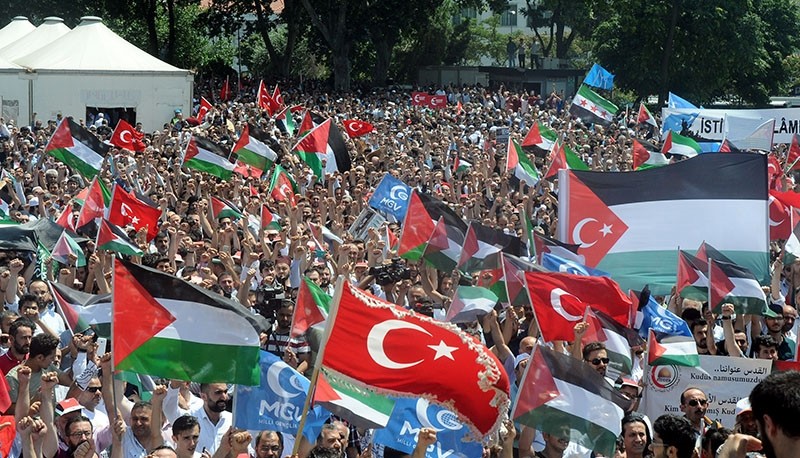 Amid rising tensions over Israel’s new restrictions on Al-Aqsa Mosque in Jerusalem, thousands of Turks took to the streets on Friday to protest Tel Aviv’s stance that is being denounced by Palestinians and Muslims worldwide

People across the country poured into the streets after Friday prayers to denounce Israel's restrictions targeting the faithful visiting Al-Aqsa Mosque in Jerusalem. Rallies were held outside mosques across Turkey, calling on Israel to remove limitations, which include metal detectors installed at the holy site and the banning of Muslims below the age of 50 from attending prayers at the mosque.

Last Friday, three gunmen opened fire on Israeli police, killing two officers before fleeing to the compound where security forces shot and killed them. Israel sealed off the site in the aftermath of the attack, saying the closure was necessary to carry out security checks. The site reopened Sunday with metal detectors at entrances, prompting the Palestinian boycott over alleged Israeli efforts to expand their control over the sensitive site.

The move prompted an angry response from Turks on social media as well as criticism from Turkish leaders. Turkey, a close ally of the Palestinian Authority in Ramallah and the Hamas-led government in Gaza, stepped up its support for Palestinians in recent years in the face of escalating pressure from Israel on Palestinians under the pretext of fighting acts of terrorism.

In mosques across Turkey, imams recited sermons published by the state-run Presidency of Religious Affairs (DİB). "Jerusalem, which has been the center of peace and calm in history, has been in grief for a long time. Al-Aqsa Mosque, our first qibla, is wounded. Jerusalem is now far away from being the city of peace after experiencing all kinds of transgressions. The unity, togetherness and most sacred values of believers are targeted more and more every day in the land of the prophets," the sermon said. "Muslims are cruelly and barbarically prevented from worshipping in their own mosques. Friday prayer could not be performed at the mosque last week for the first time since 1967. It should be remembered that there can be no legal grounds, no religious basis and no humane reason for shutting down a temple," it further said. The DİB called on the faithful to pray to "not allow those who attempt to occupy Al-Aqsa Mosque and Islamic cities and help our Muslim brothers and sisters so they may overcome the hardships they are going through as quickly as possible."

A large crowd gathered at Beyazıt Square in Istanbul for a rally organized by several Muslim non-governmental organizations.

A smaller group of protesters gathered outside of the Israeli Consulate in Istanbul, chanting slogans denouncing Israel. "Don't Touch Al-Aqsa Mosque," a banner read. "Al-Aqsa is our red line. We stand with our brothers in Jerusalem. Make no mistake, Al-Aqsa is not without its defenders," Bülent Gürpınar said, reading a statement on behalf of protestors.

Ankara and the presidency, which has repeatedly condemned Israel's actions as human rights violations of Palestinians in the past, was vocal again concerning the Al-Aqsa restrictions.

President Recep Tayyip Erdoğan held phone conversations with Palestinian President Mahmoud Abbas and Israeli President Reuven Rivlin on Thursday regarding violations of the rights of Palestinians by Israeli authorities. According to presidential sources, during the morning phone call, Erdoğan emphasized that increasing human rights infringements, especially in Jerusalem, are worrisome. In the later phone call with Rivlin, Erdoğan said that the lives lost and the restrictions imposed on Al-Aqsa Mosque deeply concern Turkey. Calling Israel's actions restricting access to the mosque unacceptable, Erdoğan said that preservation of Islamic principles and the holiness of Jerusalem and the Haram al-Sharif [Noble Sanctuary] are important for the entire Muslim world. Underscoring that the measures taken at the Al-Aqsa Mosque compound were "intended to ensure that such acts of terror could not be repeated," Rivlin said that Friday's terrorist attack was "intolerable, and crossed a red line" that endangered the ability of all communities to live together. He also reiterated Israel's commitment to "safeguarding the lives of all citizens who visited the holy places."

Speaking to reporters on Friday, Prime Minister Binali Yıldırım said restricting access to Al-Aqsa Mosque would not "solve any problems." "It is wrong. Taking such radical measures in response to threats will not help in solving any problems," Yıldırım said.

Al-Aqsa Mosque is the third-holiest site in Islam after the holy cities of Mecca and Medina in Saudi Arabia. It is located in an area sacred to both Jews and Muslims. The conservative Israeli Jews often provoke tensions in the area by attempting to pray in areas designated for Muslims. In 2000, a visit by opposition leader Ariel Sharon to the site triggered a Palestinian uprising that killed thousands of Palestinians protesting Israeli oppression.