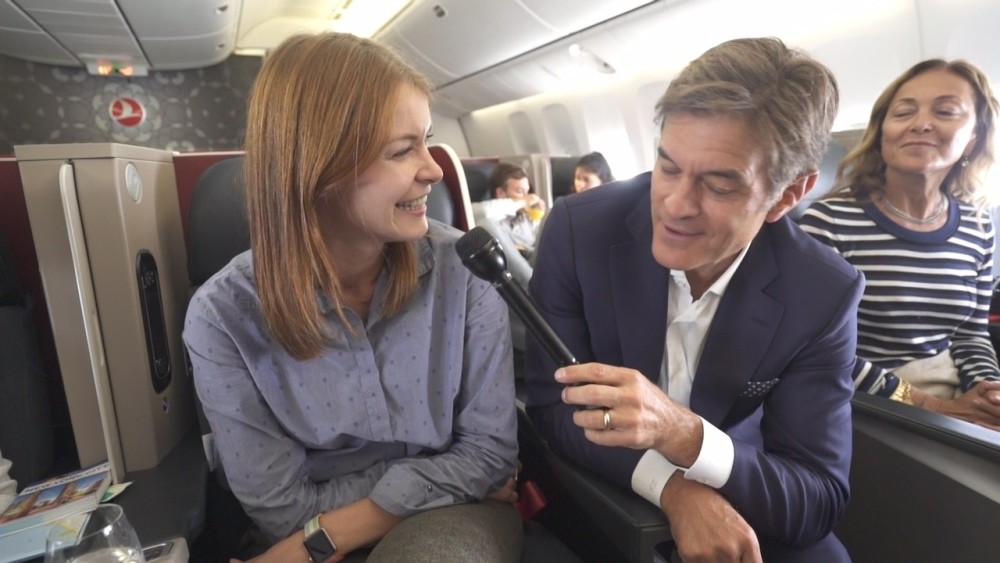 The project includes short videos and printed materials that are displayed on the airline's website, social media accounts and in-flight entertainment systems.

The launch of the project took place with a surprise meeting between Öz and passengers during one of the airline's Istanbul-New York flights. Oz delivered short messages about making healthy life choices and handed out small gifts to nearly 300 passengers through the in-flight entertainment system during the special flight.

Before the flight, Turkish Airlines Chairman İlker Ayci met Öz and said, "Dr. Öz will create a special atmosphere for our guests to enjoy the privilege of flying with Turkish Airlines even more in the plane."

The airline also said Öz saw the collaboration as "an impressive project that tends to the health and wellness dimension of flight experiences of travelers."

With short videos on cabin exercises, sleep patterns, yoga and meditation broadcast on board as well as on the official website of THY, the project aims to guide passengers to experience a relaxed flight. Each subject is explained and demonstrated by experts, including Daily Sabah writer Dr. Halit Yerebakan.

As a part of the first phase of the project, a total of nine informative videos have been filmed. The videos include advice on how to deal with allergies, traveling with children, traveling while pregnant, dehydration, jet lag, blocked noses, gas and bloating, as well as massage and exercises. THY also plans to add new videos in addition to the first nine in the project and continue to give tips for a better flight experience. Under the Fly Good Feel Good project, THY has also initiated a "Flying Doctor" scheme as well. The volunteer-based project enables physicians who are registered with THY to gain extra miles on their flights. When a doctor is needed on board, THY personnel will ask for a help from these doctors who have previously registered in the program.

Turkish Airlines flies to 300 destinations worldwide, including 251 international and 49 domestic destinations with over 330 aircraft. Last month, Turkish Airlines was named Europe's Second Best Airline by Skytrax World Airline Survey 2017, after gaining the top ranking in Europe for six consecutive years between 2011 and 2016.