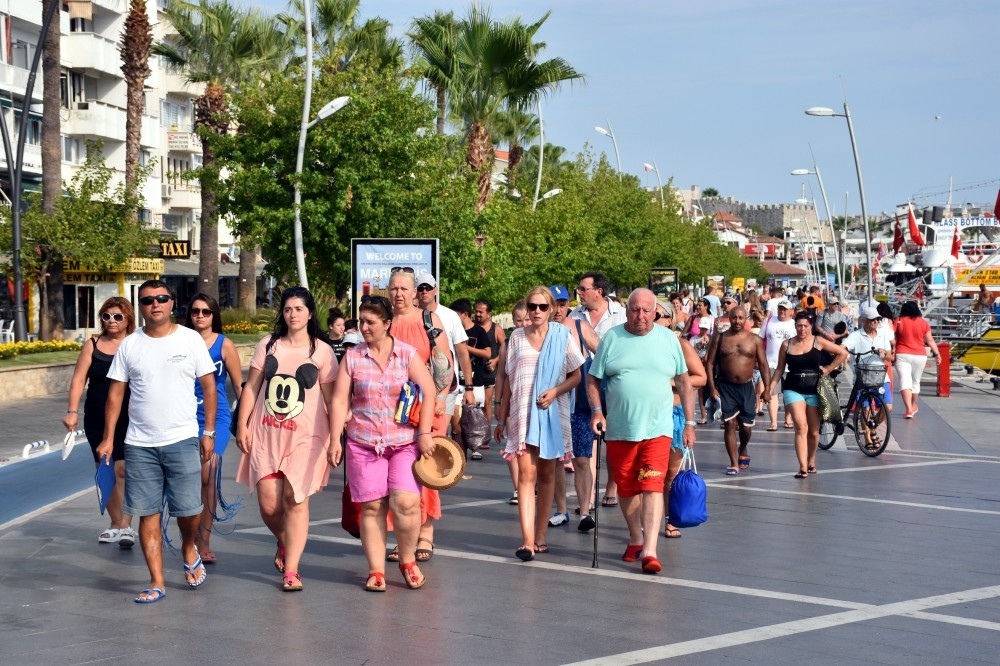 Data shows that around 1.5 million British tourists visit Muu011fla annually and some of them choose the province and its neigboring region as a place to settle.
by Anadolu Agency Aug 08, 2017 12:00 am

With 1.5 million British tourists vacationing in Muğla every year, the region has started to become home to some of them, as more tourists from the U.K. invest in residences and property in the region, which is a popular place to settle

As Muğla province becomes more widely known as a favorite holiday destination among British tourists, the province, which is one of Turkey's most important tourism hubs, is now becoming home to many foreigners who have decided to settle in the region. Having welcomed many foreign visitors with its five-star accommodation facilities and natural beauties, Muğla has become a favorite holiday spot for tourists from the U.K., especially over the past 10 years. Some tourists from the U.K., who come to Muğla and its touristic districts of Bodrum, Marmaris, Fethiye, Datça and Dalaman for vacation, have begun to settle in the region in recent years since experiencing its touristic attractions.

According to information compiled by Anadolu Agency (AA) from the Provincial Directorate of Culture and Tourism, among all foreign nationals who visit Muğla annually, U.K. nationals topped the list with the most tourists in the province, followed by nationals from Russia, Germany, Ukraine and the Netherlands.

Speaking to Anadolu Agency (AA), South Aegean Hoteliers' Association (GETOB) Chairman Bülent Bülbüoğlu pointed to the importance of the U.K. market for the region, informing that an average of 2.5 million British tourists arrive in Turkey annually. "About 1.5 million British tourists choose Muğla. We host quite a lot of tourists from the north London and Manchester regions. Marmaris has been the most popular destination among British nationals from the northern U.K. for the past 20 years," Bülbüloğlu said.

The chairman recalled that 5,000 British nationals were brought to the region by tour operators 20 years ago, stressing the 20-year relationship between Turkey and the U.K. "British culture has been applied here [in Muğla]. If you go to Antalya, you will not find restaurants serving an English breakfast but, on the other hand, you will find it served in every hotel in Marmaris. The British prefer Marmaris since it revives English culture," he said.

Noting that U.K. nationals tend to stick with their travel preferences long-term, Kırlı said that an increasing number of British tourists visit the city every year, a trend that is attributable to their love of the region.

He said that this year, the number of British tourists who come to the region climbed by 4 percent, suggesting that they expect an increase of up to 20 percent in 2018.

Dalaman, Ortaca and Köyceğiz Association of Touristic Hoteliers and Tourism Operators (DOKTOB) Chairman Yücel Okutur said that U.K. nationals generally do not like the "all-inclusive" system and prefer Muğla because of its natural characteristics and quality services, pointing out that Muğla leads the way among Turkish provinces in terms of the number of properties owned by the British.

Stating that Bodrum leaped forward in terms of the number of British tourists in the first periods of tourism, Gökbel said, "Bodrum has developed with the U.K. market for a long time. This is the reality we have seen in terms of tourism in the region, where the British are very comfortable due to optimal weather conditions and natural textures. British tourists were extremely pleased with their vacations here. This level of satisfaction has become the biggest trigger in residential sales here as well."

Gökbel stated that people from the U.K. have been acquiring residences and properties around Muğla and Bodrum and said that this has contributed nicely to the region's real estate market and tourism industry.

Citing that people from the U.K. prefer Fethiye for three main reasons, Ay said that the hospitality of the local Turkish people and their friendliness are qualities that have come to the fore among these reasons. "There is always overcast weather in the U.K. The fact that it is sunny and warm in Turkey is boosts interest among the British," Ay said, adding that another reason is the high purchasing power along with the strengthening in the British pound. "While they can afford to purchase a dinner for four in their own country, they can eat a dinner for 12 in Turkey for the same amount of money," Ay noted.

20-year resident of Bodrum speaks out Wyn Dvnn, a 72-year-old retired police officer from the U.K. and a current resident of Bodrum, said he decided to settle in the city after having gone there for vacation 20 years ago.

Stating that he lives alone in Bodrum, Dvnn said, "Bodrum and Muğla are very beautiful. I walk on the beach every morning in Bodrum. Then I go to familiar places and spend my time."

Dvnn said that the Turkish people are very friendly and he gets along very well with them, recommending that everyone come for a visit. "Especially the locals are very friendly and nice. I do not think you'll be unhappy here. I have a house and I think I will spend the rest of my life here," he added.

Mark Adwards (56), who has selected Fethiye for vacation for three years running, said that he came to the district with his wife and friends.

Pointing to Fethiye's beautiful weather and sunny conditions, Adwards said that his family feels safe here. "We are a family who love traveling. We have been to other places around the world and we have been to places in Europe where women could not even walk on their own. Wherever we went, there were people trying to pull us into their shops to spend money," Adwards continued. "Here, we do not experience these things. Turkey is a much safer place than the U.K. There is keen interest and sincerity here. You cannot eat such great food at such reasonable prices anywhere else in the world. There are many activities that can be enjoyed, ranging from sports to history in Fethiye."

Rachel Duggan (48), a resident of Fethiy

e, stated that she settled here with her husband two years ago because of their love for the district after they visited the area for vacation for 14 years.