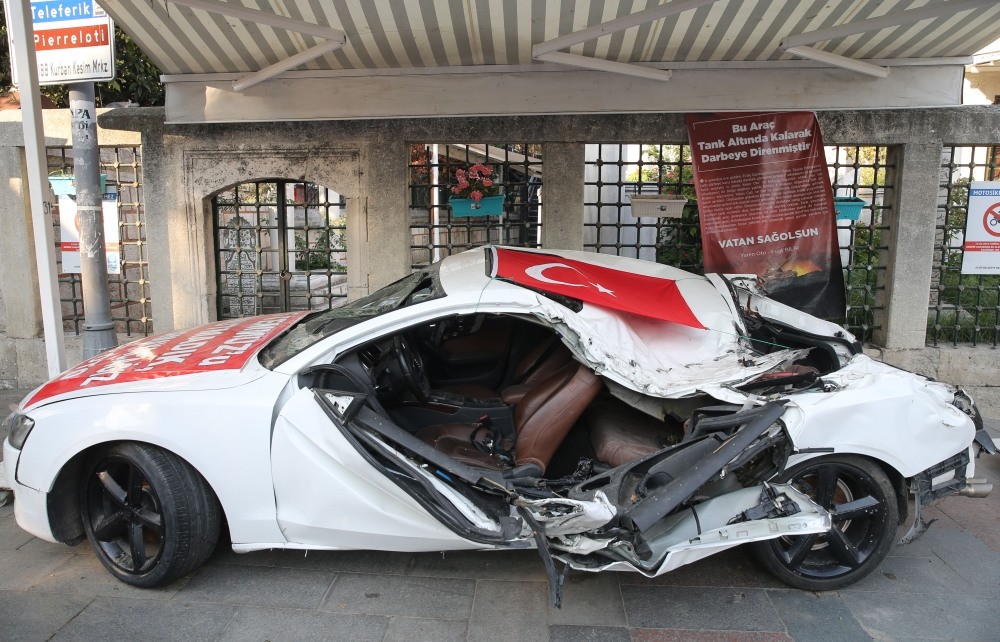 The resistance against the July 15 coup attempt that killed 250 people made history with unprecedented instances of bravery. Fuat Bilir was among those heroes. Now his car, crushed by the tanks of pro-coup officers, has become a symbol of the anti-coup resistance. The car was put on display in Eyüp Sultan Square, one of the busiest spot in Istanbul's eponymous district "to remind the passersby how Turkey escaped a violent coup," according to Bilir.

The 44-year-old resident of Eyüp was among the thousands who took to the streets after President Recep Tayyip Erdoğan's call urging the public to "reclaim democracy" on July 15. He drove to putschist-held Atatürk Airport unaware of the tanks also heading there. "I'd seen people walking toward the airport, and then I saw a tank behind me. I put on the brakes and blocked the road. It could have crushed me anyway, but I tried to at least slow it down," he said while recounting the night to Anadolu Agency (AA). Bilir survived, but suffered two broken ribs that kept him hospitalized for days. "At that moment, I couldn't think anything but protecting other people," he said. On the same road, dozens were killed when putschists opened fire on the crowds.

After the coup ordeal ended, offers poured in to Bilir to purchase the car, but he turned them down and kept the car in its damaged state. Finally, he decided to put it on public display, and the municipality allowed him to park it in the square on the anniversary of the coup bid. "We will never forget that date," Bilir said.