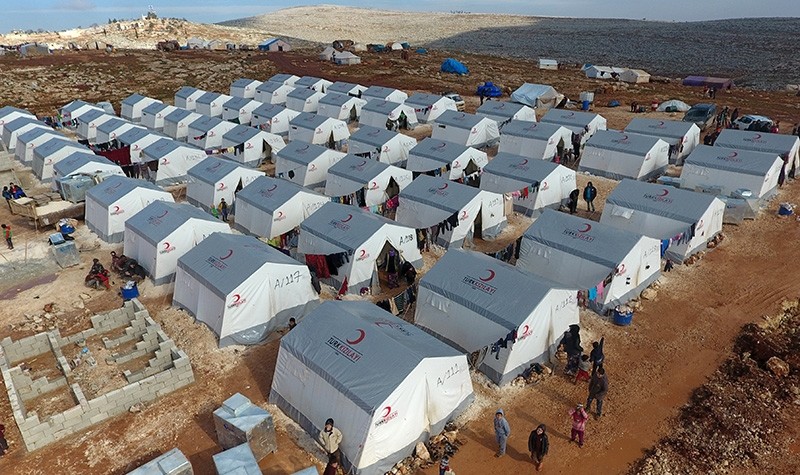 Hosting millions of refugees fleeing violence in neighboring countries and listed as the most generous country for spending the largest portion of its gross national income for humanitarian purposes, Turkey has proudly marked the World Humanitarian Day through exhibitions and statements on Saturday.

Speaking at a photo exhibition on World Humanitarian Day, Deputy Prime Minister Recep Akdağ said Turkey was fulfilling its duty to support the needy by using all possible means of resources and would continue to do its best. 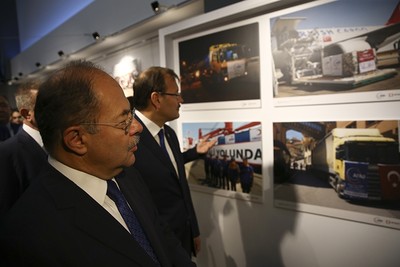 The exhibition titled "Those Sheltering in Our Heart" (sic) was organized by Turkey's Directorate General of Press and Information (DGPI) and the Disaster and Emergency Management Presidency (AFAD) at the Press Culture and Arts Center in the capital Ankara.

UNHCR Deputy Representative in Turkey Paolo A. Artini and Deputy Head of the EU Delegation to Turkey Gabriel Munera-Vinals were among the other attendees at the event.

Recalling Turkey's effort to help over 3 million refugees on its soil as well as various humanitarian endeavors worldwide, Akdağ said: "Today everyone knows that Turkey is the leading country in humanitarian aid works."

"If Turkey extends its helping hands to the needy people from Philippines to Somalia today, it is because of our history, culture and religious belief."

He said the world should do more to prevent conflicts, namely the one in Syria, which forced millions of people to flee.

"On World Humanitarian Day, we pay tribute to, and honor, all those who risk their lives while bringing assistance to victims of wars and national disasters worldwide. We commend the bravery of all men and women who continue to work selflessly for the benefits of others."

He noted that over 4,000 humanitarian workers became victims of attacks in the past two decades.

Munera-Vinals also applauded Turkey for its role in humanitarian aid efforts across the world.

"We salute the countless Turkish men and women who work as humanitarians in Turkey and around the globe," he said.

UNHRC representative Paolo A. Artini said the world was facing new crises every passing day. "The main challenge is to respond to so many crises at the same time," he added.

He also said there were 158 major attacks against humanitarian aid organizations in 2016. "A total of 288 aid workers were killed, injured or kidnapped," he added.

"On the occasion of the World Humanitarian Day, we extend our gratitude and appreciation to the aid workers, who diligently maintain humanitarian aid efforts throughout the world under the most compelling conditions, and we commemorate with respect and gratitude those who have lost their lives in the course of these efforts," a press release said.

The ministry stressed that despite the international community's efforts, the number of people in need, which is around 140 million, "increases every passing day" and "attacks against humanitarian aid workers never cease, humanitarian law violations become widespread and continue to remain unpunished."

"It is a matter of urgent necessity that the commitments made at various platforms, including the World Humanitarian Summit hosted by Turkey, be met for improving this scene which is incompatible with modern world and also for grounding the efforts of humanitarian aid workers on a solid global system," it added.

The ministry called for "global solidarity and determination" in order to provide a future where everyone could live "in peace and hope". 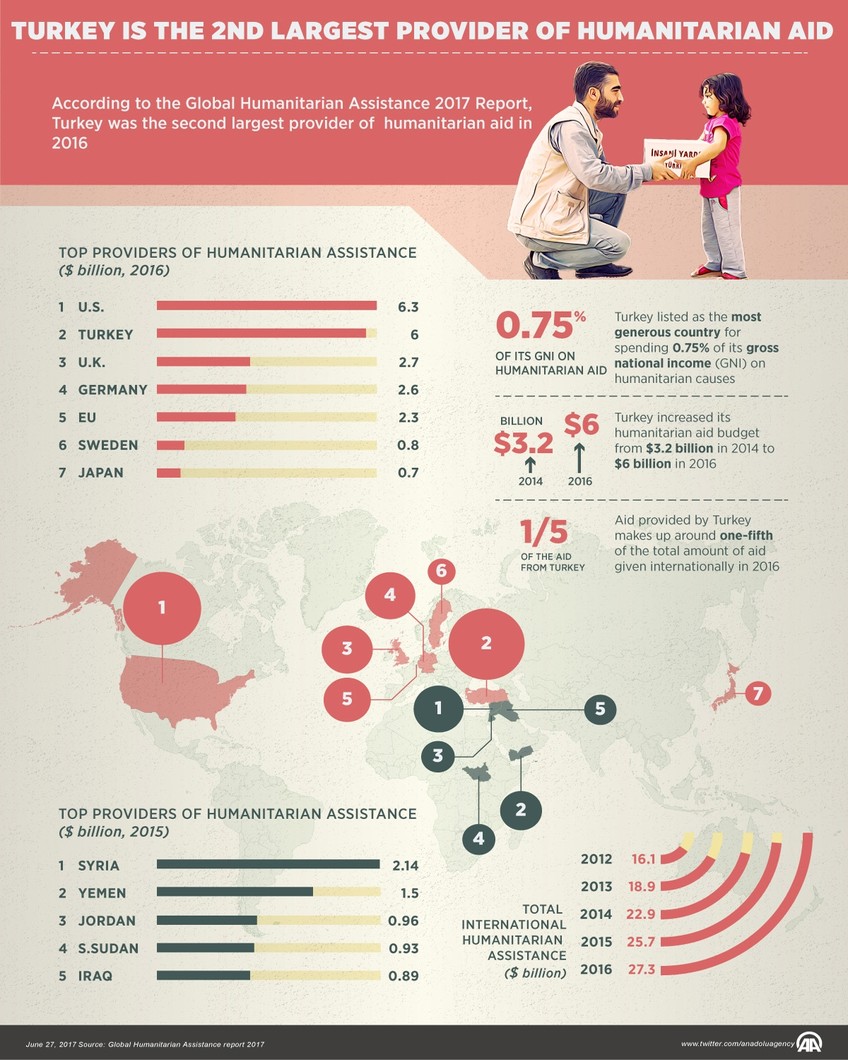 Turkey has contributed billions of dollars in humanitarian aid despite the fact that it is not the richest country in the world, an aid organization official said Friday on the eve of World Humanitarian Day.

According to Development Initiative's (DI) Global Humanitarian Assistance Report released in June, Turkey came in second after the U.S. among countries that contributed the most humanitarian aid in 2016.

Turkey ranks first if one takes into account national incomes. The country's gross national income was $857 billion in 2016, while in the U.S. it was $18.7 trillion.

İzzet Şahin, a senior official of Foundation for Human Rights and Freedoms and Humanitarian Relief (IHH), said: "Turkey is helping many regions where several countries and institutions have not been able to reach.

"Despite the fact that Turkey is not the richest country in the world, the country has carried itself to the top of humanitarian aid providers, which demonstrates the generosity of Anatolian people," Şahin said.

He said there had been a massive increase in people needing help due to man-made disasters.

"As the U.N. has helped many crisis regions, the U.N. Security Council cannot prevent the increase in the number of victims in crisis and warzones."

Turkey is also the country that continues to host the highest number of refugees -- 2.87 million -- in the world, according to official figures.

The report also showed that humanitarian aid that was collected in 2016 across the world totaled $27.3 billion which met only 40 percent of all requirements.

Turkey hosts more Syrian refugees than any other country in the world. The country has spent around $25 billion for helping and sheltering refugees since the beginning of the Syrian civil war.

In 2008, the UN General Assembly designated Aug. 19 as World Humanitarian Day to raise awareness about humanitarian assistance worldwide and the people, who risk their lives to provide it. The date marks the anniversary of the 2003 bombing of the United Nations headquarters in Baghdad.