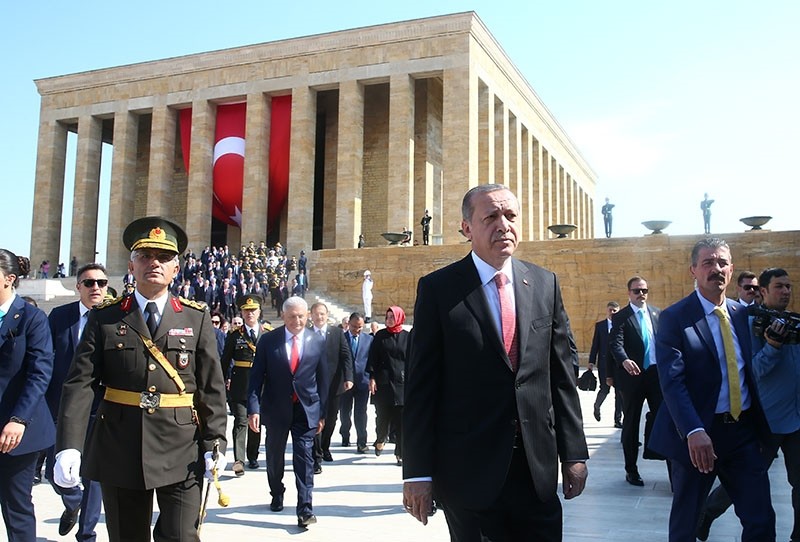 Turkey celebrated Victory Day, the anniversary of a decisive victory against Greek forces 95 years ago that paved the way for independence. Events were held across the country while President Erdoğan received accomplished citizens known for their personal victories

The Aug. 30 Victory Day, an occasion to celebrate Turkey's glorious past and a decisive victory in the 1922 War of Independence, was marked Wednesday across Turkey. Turkish leaders and dignitaries remembered fallen soldiers and paid tribute to Mustafa Kemal Atatürk, who led Turkish forces to victory at the Battle of Dumlupınar against the Greek military. At the Presidential Palace, President Recep Tayyip Erdoğan received the families of the victims in Turkey's counterterrorism fight as well as people praised for their own victories against all odds.

During an address in Anıtkabir, Erdoğan said that the historic victory was the final string in a struggle to make Anatolia a homeland, beginning with the Battle of Manzikert (Malazgirt) in 1071, which was commemorated on August 26.

Following the ceremony at Anıtkabir, President Recep Tayyip Erdoğan hosted an evening reception at the Beştepe Presidential Palace in Ankara to mark the momentous day.

The reception's guests were from all walks of life, including families of martyrs and veterans. Families of victims of the PKK terror, including Eren Bülbül, a 15-year-old boy killed in an attack in northern Turkey, district governor Muhammet Fatih Safitürk, killed in his office by a bomb planted by terrorists and Şenay Aybüke Yalçın, the young teacher killed in a PKK attack in southeastern Turkey, attended the reception. A truck driver who stirred patriotic fervor in the public by hanging Turkish flags and a photo of a PKK victim amid gunfire by the PKK in the southeast was another guest. A woman who built a solar power plant in her village in northern Turkey, a crew of Turkish Airlines who helped a French-Guinean woman to deliver her baby aboard a flight, high school students who invented a band aid for diabetes patients, a team of Turkish scientists who discovered an exoplanet, and windsurfing world champion Fulya Ünlü were among other guests.

The last week of August is celebrated as Victory Week in Turkey to honor two key victories by Turkish forces, the Battle of Manzikert on August 26, 1071, when Seljuk Turks defeated the Byzantine army, opening the way for Turkish rule in Anatolia, and the start of the Great Offensive on August 26, 1922, resulting in the Greek defeat at the hands of Turks.

The victory over the Greek military on August 30, 1922 in the Battle of Dumlupınar, in Turkey's Aegean province of Kütahya, was the last large engagement between the two armies in the War of Independence, which began with the Greek invasion of İzmir in May 1919 after the end of World War I, with tacit support from the Allied forces, especially Great Britain.

Following the Greek army's defeat in Dumlupınar, the remainder of the disorganized and battered ranks fled back to the western city of Izmir, applying scorched earth tactics and destroying towns and villages along the 300 kilometer route.

The Turkish army liberated Izmir on September 9, which sealed the defeat of the Greek expedition into Anatolia, and hostilities ended with the Armistice of Mudanya on October 11, 1922.