Turkey to admit 106-year-old Afghan refugee set to be deported from Sweden: Report 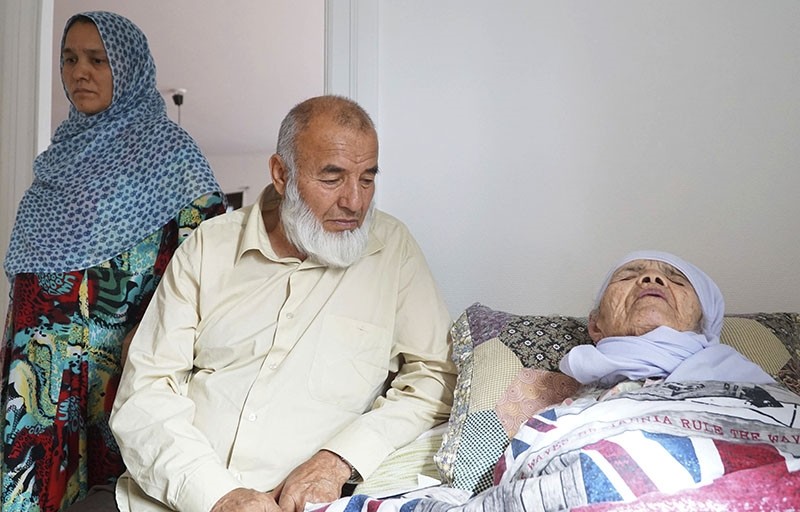 106-year-old Afghan refugee Bibihal Uzbeki rests in bed attended by her son Mohammadollah and daughter-in-law Ziba, in Hova, Sweden, Sept. 3, 2017. Despite being severely disabled and barely able to speak, Uzbeki is facing deportation. (AP Photo)
by Daily Sabah with AP Sep 07, 2017 12:00 am

A report by Turkey's İhlas News Agency (IHA) said the Turkish Foreign Ministry moved to admit a 106-year-old Afghan woman into the country after her asylum appeal was rejected by Sweden. Quoting Foreign Ministry officials, IHA report said Turkey was awaiting the final verdict on the woman's asylum request that could take seven months.

Bibihal Uzbeki, 106, made a perilous journey to Europe, carried by her son and grandson through mountains, deserts and forests. She is severely disabled and can barely speak. Her family has appealed the rejection.

Their journey made headlines in 2015, when they were part of a huge influx of people who came to Europe from Syria, Afghanistan, Iraq and other countries. They traveled by foot and on trains through the Balkans before finally reaching Sweden. Two years later, she and her 11 family members are living in the small village of Hova, in central Sweden.

Her rejection letter came during the Muslim holy month of Ramadan in early summer. While the family avoided telling her, the constant grief from her granddaughters made her suspicious.

"My sisters were crying," explained 22-year-old Mohammed Uzbeki. "My grandmother asked, 'Why are you crying?'" The family says that soon after she understood her request was denied, her health started deteriorating and she suffered a debilitating stroke.

The Swedish Migration Agency confirmed in a statement to the Associated Press (AP) they had "taken a decision regarding an expulsion in the case," adding "generally speaking, high age does not in itself provide grounds for asylum."

People whose applications are rejected are allowed up to three appeals, a process that can take a long time. The applications of other family members are in various stages of appeal.

The family feels the plight of Afghans is being ignored by Swedish authorities. Many countries in Europe deny asylum to Afghans from parts of the country considered safe.

"The reasoning from the migration agency is that it's not unsafe enough in Afghanistan," said Sanna Vestin, the head of the Swedish Network of Refugee Support Groups. But she said many of the big cities cited as safe are not at the moment.

Before their journey to Sweden, the family had been living illegally in Iran for eight years. They left Afghanistan because of an ongoing war and insecurity, but Mohammed Uzbeki said it's difficult to prove that the family faces a specific enemy if they return.

"If I knew who was the enemy, I would have just avoided them," he said, citing the Daesh, Taliban terror groups and suicide bombers as possible dangers.

In the Uzbeki home, Bibihal's daughter-in-law gently readjusts the elderly woman's veil as Mohammed Uzbeki watches over her.

"She still cannot speak properly, she has hallucinations," he laments. "She says they are coming to kill us, we should run away."