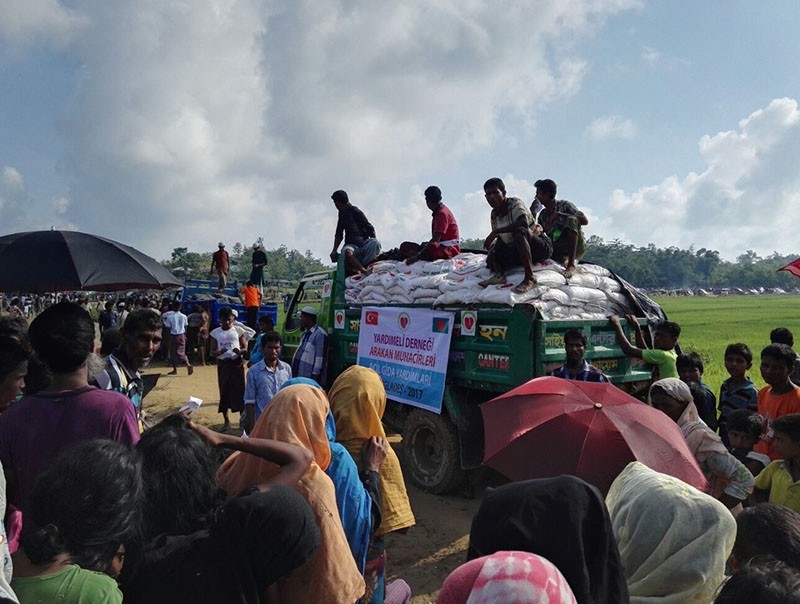 An orphanage, which has been built by a Turkish aid agency and hosts currently 100 Rohingya children, is now preparing to welcome more.

The Turkey-based Yardımeli aid agency in March inaugurated the orphanage complex in Cox's Bazar, Bangladesh to provide shelter to 100 Rohingya orphans and give education to 500 local students.

The Yardımeli Darul Hikme Education and Social Complex, which reserves three-floor school building and a mosque, was built on an area of 12,000 square meters (129,166 square feet). The school building has 20 classrooms, five dormitory rooms for orphans and two large halls for social activities.

"All these work we have done here is financed by the compassionate Turkish people," said Yardımeli's Bangladesh Coordinator Mehmet Çitil.

"On behalf of Rohingya and people of Bangladesh, I thank all of our brothers and sisters from Turkey and Europe for their support to those who are in need."

Çitil said that Turkish Cooperation and Coordination Agency (TIKA) has also took part in meeting needs such as desks and bunk beds.

"Wherever you go in the world, Turkey is now known as a country that is reaching out to needy people…," he added.

A statement released by the agency on Friday said that 600 families were provided with food supplies in Tamfali refugee camp under the scope of urgent food aid program, urging donors to contribute more since the number of refugees in camps are rising day by day.

It added that the agency is using the complex and 29 affiliated masjids in the region as centers for its aid efforts.

Describing the complex as a "great structure and a great way to obtain better and educated generation", the school principal Mujib Siraj thanked Turkish government and those who contributed.

These children are at a risk of sexual abuse, human trafficking and psychological trauma.

Since Aug. 25, more than 429,000 Rohingya have crossed from Myanmar's western state of Rakhine into Bangladesh, according to the UN's migration agency.

In total, more than 800,000 Rohingya refugees are now believed to be in Bangladesh, including the arrivals since Aug. 25.

The refugees are fleeing a fresh security operation in which security forces and Buddhist mobs have killed men, women and children, looted homes and torched Rohingya villages. According to Bangladeshi Foreign Minister Abul Hasan Mahmood Ali, around 3,000 Rohingya have been killed in the crackdown.

Turkey has been at the forefront of providing aid to Rohingya refugees and President Recep Tayyip Erdoğan raised the issue with the UN.