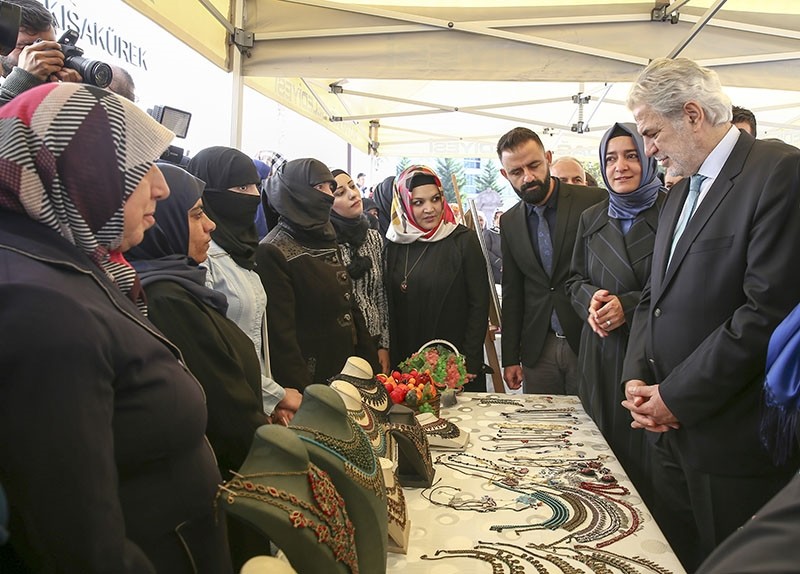 A joint Turkish-European Union project has reached out to 1 million migrants in the first year of its implementation as Ankara and Brussels hailed the cooperation to help those in need.

Delivering a speech at a ceremony held for the first anniversary of the joint program, Family and Social Affairs Minister Fatma Betül Sayan Kaya said that Turkey has opened its doors to refugees from the very first day of the Syrian crisis.

"We have opened our doors and hearts as a nation from the first day to our brothers and sisters with whom we share the same region, culture and beliefs. There are never boundaries to humanitarian and conscience issues," Kaya said.

"With its strong digital infrastructure, the Integrated Social Aid Information System of our ministry has been and will be crucial for implementing the Emergency Social Safety Net in a fast, digital, transparent and objective way, from the application stage right through to cash transfers," she added.

"Today is a milestone for the life-changing results achieved by our biggest ever aid program and for the EU delivering on its commitments to Turkey. We have made a difference for a staggering 1 million people already," EU Commissioner for Humanitarian Aid and Crisis Management Christos Stylianides said.

The 348 million-euro program provides monthly money transfers to refugees in Turkey through a special debit card, Kızılay Card, that can be used at local stores.

Registered refugees have received around 30 euros per person per month as part of the plan implemented by the Turkish Red Crescent and the World Food Program with EU assistance since September last year.

"With the commitment and work of our partners, the impact of the program grows by the day. Turkey continues to host the largest refugee population in the world. It is our humanitarian and moral duty to help refugees that have fled war and persecution," Sytlianides said.

Head of the Turkish Red Crescent, Kerem Kınık, also spoke at the ceremony. "The point the Emergency Social Safety Net Program has reached today is something to be proud of, as it is carried out to make sure that the rights of millions of refugees coming from Africa, Asia and the Middle East who are hosted by Turkey are protected, that they are not subjected to oppression, do not become vulnerable and are not excluded from society," Kınık said.

"This project, which sets an example to the world, will end someday, but its positive impact will be talked about for years."

Turkey, for the third consecutive year, has the most Syrian refugees worldwide, nearly 45 percent of all Syrian refugees in the region, according to United Nations High Commissioner for Refugees June statistics. The country was also declared the world's largest refugee-hosting country on World Refugee Day this year.

After Turkey, Lebanon has the most Syrian refugees, with the U.N. saying that 1 million Syrians are living in the country.

Children make up a substantial portion of the refugee population that fled their devastated country for Turkey, Lebanon and Jordan, among other countries, and are among the most vulnerable. Education is a main concern, as displacement does not allow them to attend school, while the scars of war that has killed hundreds of thousands will likely remain with them for the rest of their lives.

Turkey provides psychiatric counseling and education for children in refugee camps along the border, although the camps are home to only a small fraction of refugees in the country. Some 508,000 Syrian refugee children attend schools outside and inside refugee camps, while 225,000 Syrians are enrolled in vocational training courses.

Championing international efforts for refugees, Turkey has spent more than $25 billion for the well-being of refugees.