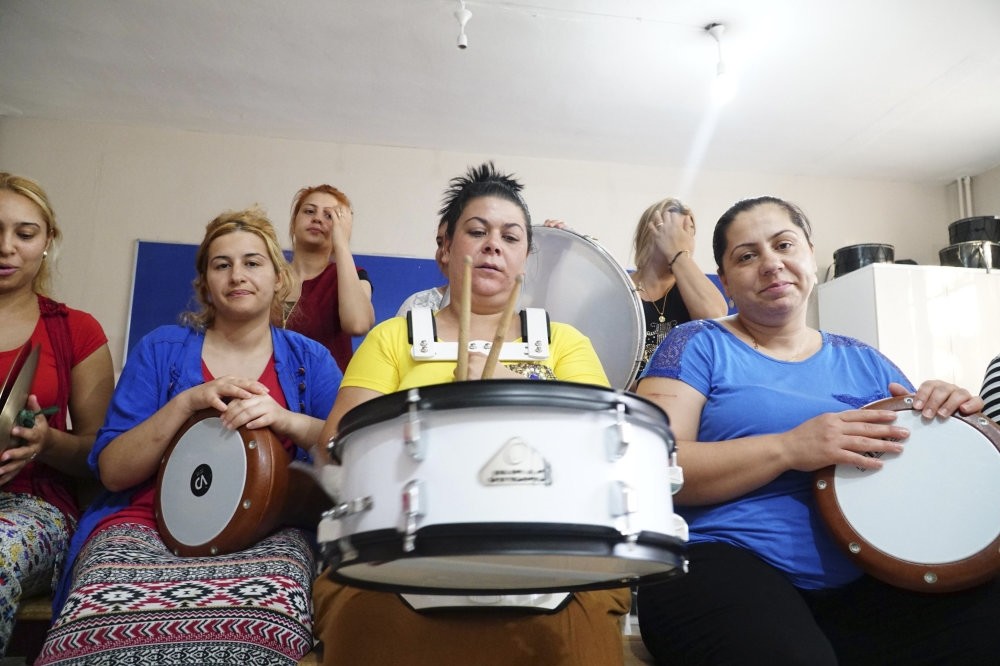 Roma women from Tekirdau011f who joined the SIROMA project formed a band and now perform at weddings and other events.
by Compiled from Wire Services Nov 01, 2017 12:00 am

A project jointly funded by the EU and the Turkish government to improve the lives of the country's Roma citizens wrapped up yesterday, having helped hundreds from the underprivileged minority access education and employment

Two years after its launch, the Technical Assistance for Promoting Social Inclusion in Densely Roma Populated Areas (SIROMA) was concluded yesterday with a ceremony attended by Roma citizens who benefited from the program.

Funded by the Turkish government and the EU, SIROMA, with a budget of more than 10 million euros, reached out to the Roma community whose inherent poverty and discrimination they encounter are among their major challenges.

Some 2,000 people from the community were enrolled in vocational training courses and 1,014 Roma citizens attended literacy classes as part of the project.

Limited access to employment and education is a main obstacle for the Roma. Many are forced to work in low-paying jobs and choose to skip education to make a living for their impoverished families. The government, under the tenure of then prime minister and incumbent President Recep Tayyip Erdoğan, had launched a Romani initiative to help the underprivileged community. Erdoğan, with his folksy attitude and childhood in a neighborhood in Istanbul with a large Roma population often mentioned in his speeches is a beloved figure among the community.

Speaking at the ceremony, which was attended by Roma citizens who benefited from SIROMA along with EU officials, Family and Social Policies Minister Fatma Betül Sayan Kaya said Roma are "a wealth Turkey should be proud of" and the country learned its lesson from the "bitter experiences our Roma brothers and sisters suffered, particularly in Europe."

Detailing the government's work for areas densely populated by the community, Kaya said they have set up social consultation centers, known as SODAM, in six provinces to help disadvantaged Roma families, particularly women. She said the government also built more than 4,600 apartments in 15 cities as part of social housing plans for the community. Citing the launch of an initiative for the community, Kaya said they finalized an action plan last year to help the community. "Turkey has always opened its doors to Roma throughout its history and they have been free in the country," Kaya said.

The government is also gradually rolling out incentives for Roma under an action plan, including interest-free loans for entrepreneurs from the community and vocational training. It also pledged technical support for community members planning to establish co-ops. The government will also deploy job consultants to help them in employment.

Those in traditional occupations that members of the Roma community have made a living from such as tinsmithing and basket weaving will be helped through access to larger markets and receive incentives to sustain their jobs, which are slowly becoming extinct due lower demand. The government will also launch a campaign to educate the Roma community.