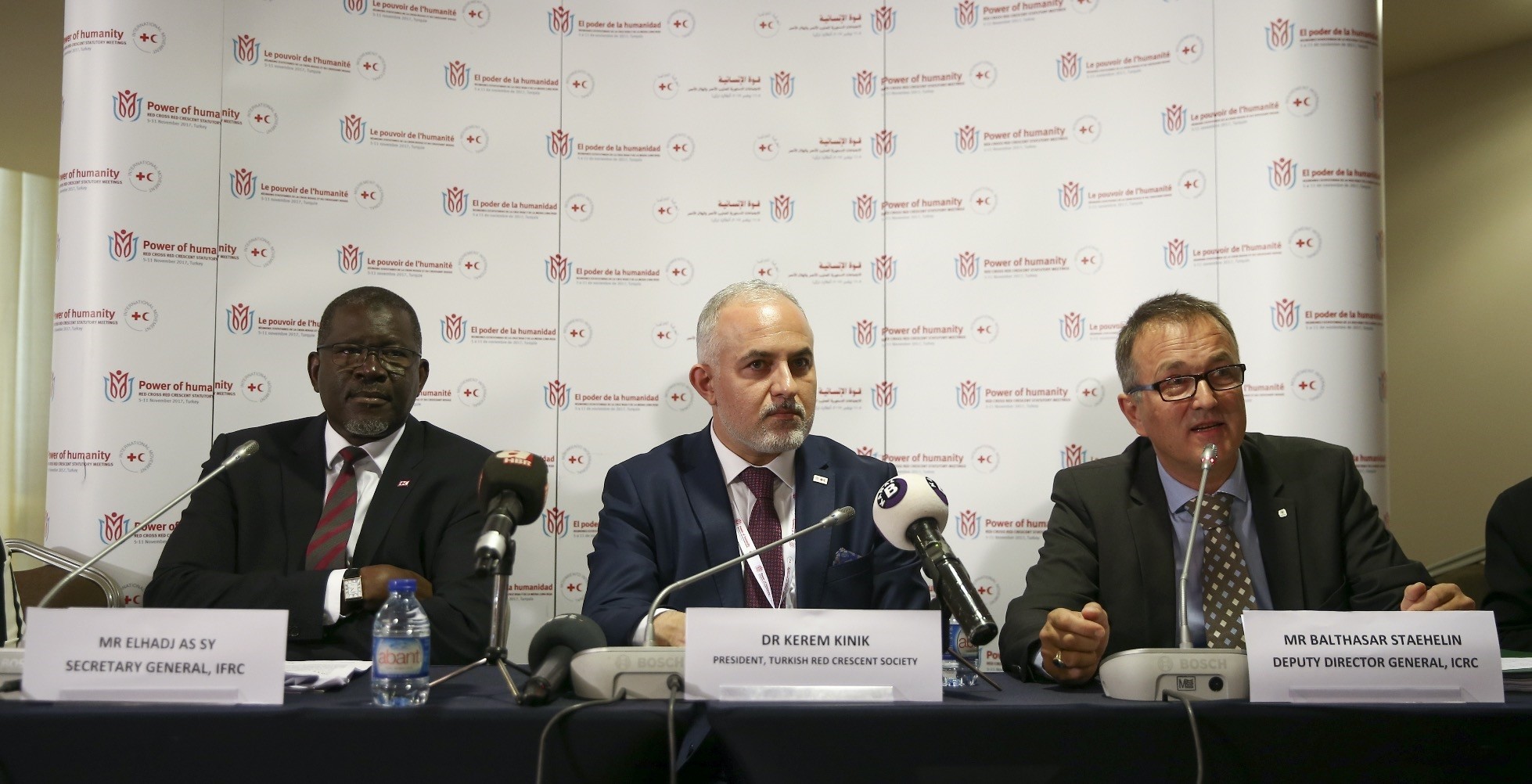 Southern Turkish province of Antalya hosts a seven-day convention of International Red Cross and Red Crescent. Hosted by the Turkish Red Crescent, the event will discuss how, what organizers termed as the world's largest global humanitarian movement, fares and its future. The event is attended by some 1,500 representatives from Red Crescent and Red Cross societies from 190 countries.

A number of humanitarian crises, particularly in Myanmar, Somalia, Iraq and Syria, will be discussed during the event.

"We will determine new visions and strategies. We will focus on the next four years with new goals," Kınık said.

"There is injustice and imbalance in the world and only the good hands can put an end to this," he said.

Earlier, Kınık announced his candidacy for the European regional vice presidency of the International Federation of Red Cross and Red Crescent Societies (IFRC) at its general assembly.

"Turkey wants humanitarian aid to be implemented more actively and more extensively. If we win the election, we will be the voice of the voiceless in the region and worldwide, which is why we put our candidacy forward," he said.

"We have one agenda for this meeting, namely, 'How can we ease human suffering around the world? How can we protect human dignity? How can we provide more help to those in need?' This is what we'll talk about," Kınık added.

The Red Crescent head said that at the 2019 IFRC General Assembly the group will decide on its 2030 strategies.

At the meeting, a new president, four vice presidents, and board members of the IFRC will be elected for four-year terms. Current IFRC head Tadateru Konoe is also president of the Japanese Red Cross Society.

Candidates from Italy, Norway, Jordan and Sweden are also seeking the presidency.

Turkey's Red Crescent has been a governing board member of federation since 2005. Turkey joined the International Red Cross-Red Crescent Movement in 1868.

The federation is the world's largest humanitarian organization, providing assistance without discrimination as to nationality, race, religious beliefs, class or political opinions, according to the group.

The IFRC, which was established in 1919 in Paris, has 190 members. Its objective is to inspire, encourage, facilitate and promote all forms of humanitarian activities by national societies to prevent human suffering, and promote human dignity and peace worldwide.

He said these strategies will revamp humanitarian aid assistance by strengthening national organizations. 'Human suffering needs to be eased at its origin and international politics on migration and refugees need to be newly approached by putting people at the center," he said.

Next year, Turkish Red Crescent will mark its 150th anniversary. "We, the Turkish Red Crescent Society, as a one-and-a-half-century-old good hands movement, decided to run for the European regional vice presidency position in the federation elections," he continued. "We believe that the activities of the federation should be stepped up. The federation is not where it should be at the moment. We are determining new visions and strategies. We will focus on the next four years with new goals," he said.