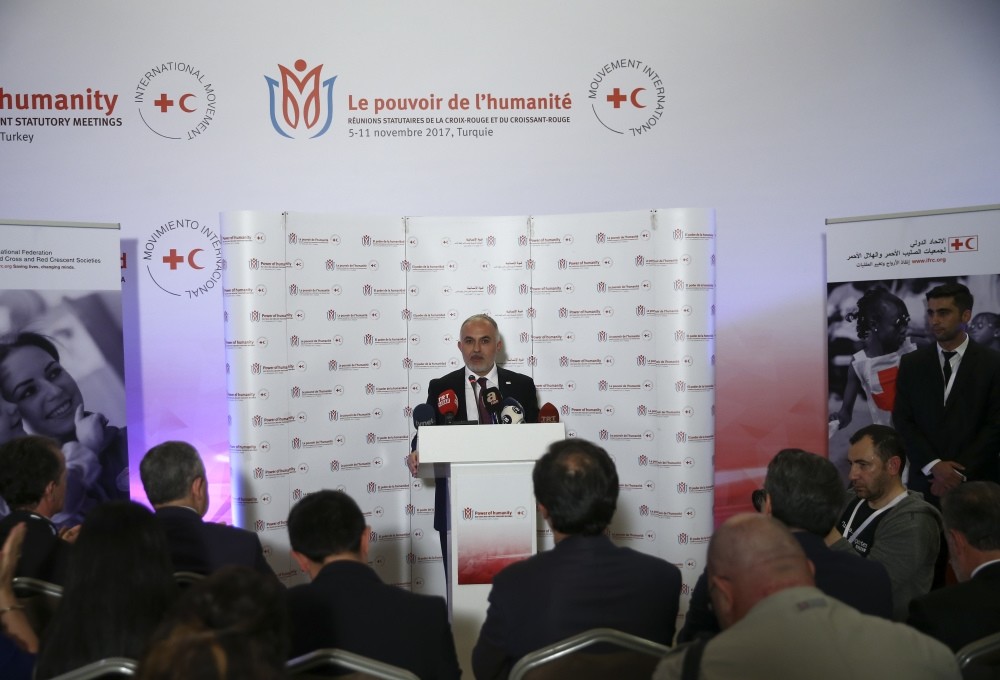 Joining the executive board of the International Red Cross and Red Crescent Societies (IFRC), Turkey plans to focus on the problems of youth and migrants

Turkey is set to open a center of excellence to work on youth issues and disaster management during its term on the executive board of the International Red Cross and Red Crescent Societies (IFRC), Kerem Kınık, president of the Turkish Red Crescent, told Daily Sabah. IFRC, the world's largest humanitarian organization, held the election for the new president and vice presidents to be in charge of regional management for the next four years in Antalya on Monday. Delegates from 189 countries, a record in the number of participants, voted.

Kınık was elected the IFRC vice president responsible for the European region, which includes 53 countries from Europe, the Balkans, the Caucasus and the Baltic region.

In an exclusive interview with Daily Sabah, the newly elected vice president shared some of their plans for Europe's Good Hands, a phrase used by the federation for their member volunteers.

"The modern world's problems are very different from those in the previous century. So, the older approaches are no longer enough to ease the pain," Kınık said, adding, "For new approaches and models, the IFRC movement needs to raise its voice, widen its operations and make its resources more sustainable."

He said that ahead of the IFRC election, the Turkish Red Crescent promised that it would work on humanitarian diplomacy to ease conflicts, develop security level and protect people living in the conflict zones.

"We believe that the new executive board will show strong governance, and will help us take these steps," Kınık said.

Meanwhile, the head of the Italian Red Cross Francesco Rocca was elected as the president of the IFRC. Senegal's Abdoul Azize Diallo, Venezuela's Miguel Angel Villarroel Sierraalta, and China's Chen Zhu were elected for the regions of Africa, America, and Asia Pacific, respectively.

Turkey, during its vice presidency, will be working with the biggest donors in the world, the Turkish Red Crescent president and now IFRC vice president said, adding that Europe stands out with the largest amount of donation compared to the other regions. He added that Turkey will be coordinating the operations of these donor countries under the roof of the IFRC.

"We aim to focus more on migration and refugee crisis. We want to contribute by producing more human-centered policies on these issues," Kınık said. "I believe our experiences in migration and conflict zones will help us develop more value-added solutions and will make us a good solution partner for Europe."

Turkey joined the International Red Cross-Red Crescent Movement in 1868. However, the federation was officially founded in Paris in 1919. Its headquarters are located in Geneva with the regional office in Hungary. Besides, the Red Cross Europe also runs an office in Brussels.

Now, the Turkish Red Crescent is planning to open a regional office in the form of an excellence center to work on problems of youth and disaster management, Kınık explained.

Turkey has supported millions of refugees, mostly from Syria, over the recent years. The U.N.'s refugee agency reported that around 65.6 million people worldwide were displaced at the end of 2016 due to conflict, hunger, and poverty.

Last year, Ankara spent more than $6 billion on humanitarian aid, according to the Development Initiatives' Global Humanitarian Assistance Report, making Turkey the largest donor according to gross domestic product (GDP) and second only to the U.S. in total funding.

According to official statistics, Turkey currently hosts more than 3.4 million Syrians who have fled north since the beginning of the civil war in 2011. Ankara calculates that it has spent at least $30 billion in sheltering and providing for these refugees.

"The parameters of this success that led Turkey to take the IFRC vice president's office were the country's reactions to the crisis, hosting millions of refugees, raising a voice for humanity, and focusing on human-centered democracy in its national policies," Kınık noted.

Hosted by the Turkish Red Crescent, the event in Antalya was attended by some 1,600 Red Crescent and Red Cross representatives from 189 countries. Participants discussed how the world's largest humanitarian movement currently fares and its future. A number of humanitarian crises, particularly in Myanmar, Somalia, Iraq, and Syria, were also discussed at the event.

The federation is the world's largest humanitarian organization, providing assistance without discrimination to nationality, race, religious beliefs, class or political opinions, according to the group.

The group uses the phrase "Power of Humanity" as its slogan and looks to inspire, encourage, facilitate and promote all forms of humanitarian activities by national societies to prevent human suffering and promote human dignity and peace worldwide.