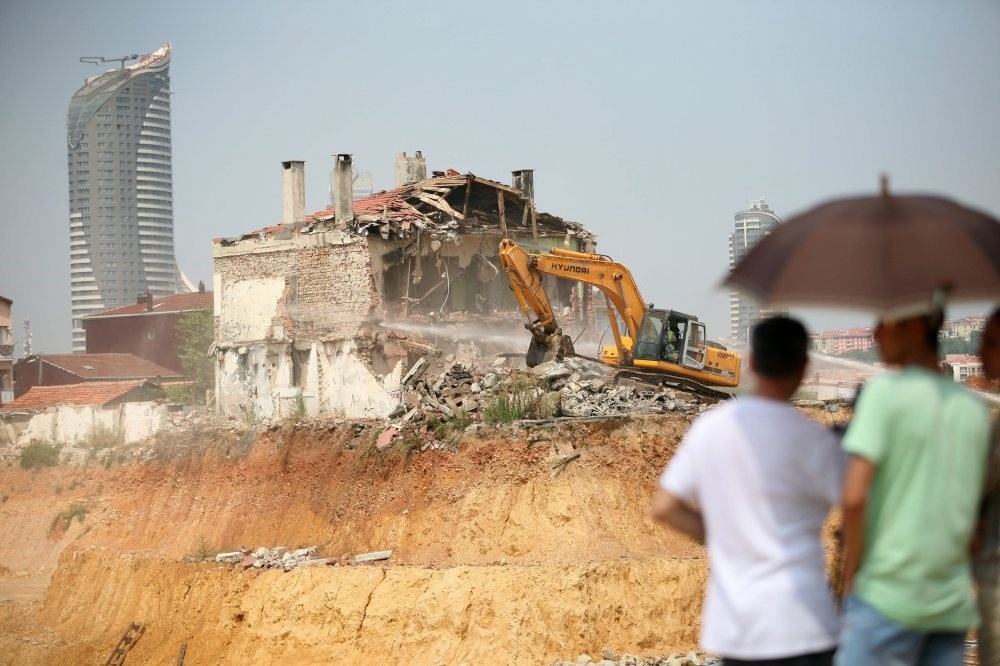 People watch as a bulldozer demolishes a house in Fikirtepe, the Istanbul district where old buildings are being replaced with modern residences as part of urban transformation project.
by daily sabah Nov 09, 2017 12:00 am

The Urbanization Council ended its nine-month discussion Wednesday with an event at the Presidential Palace Complex, where it sought to address problems stemming from rapid urbanization and plan the framework of cities in advance of fast expansion

In its drive to become one of the world's largest economies, urbanization is both a benefit and challenge for Turkey. More and more people migrate to cities amid the economic boom and decreasing space occasionally fuels criticism for the "concrete jungle." The Urbanization Council of the country's Environment and Urban Development Ministry looks to address problems related to the phenomenon while seeking answers on how to best tackle city expansion planning. After nine months of work, the council composed of experts in the field, ended the program on urbanization with an event hosted by President Recep Tayyip Erdoğan.

Erdoğan, a former mayor credited with the redevelopment of – the country's most populated city – Istanbul, expressed his worries about the current state of cities whose development is "driven by personal greed rather than a consideration for people's needs." "New technologies allow us to design and build structures hundreds of meters tall and places past generations found uninhabitable are now big cities. Yet, this newfound power has made mankind more alienated to his or her environment and society. It is a time of reverence of people's greed and it is this mindset that has created chronic problems the world faces today," Erdoğan said.

"Bad urbanization, pollution, social problems and even terrorism is nothing but a reflection of this radical change in modern times. Urban development is one of the areas where this mental degeneration is felt most," he added.

Referring to his tenure as Istanbul mayor, which started in 1994, Erdoğan said there were 640,000 "gecekondus" (shanties illegally built by migrants from other cities) in Istanbul when he was elected. "Istanbul had a population of 8 million then. When my tenure ended, the number of gecekondus dropped to 110,000. Nevertheless, due to illegal construction, gecekondus still thrive today," Erdoğan lamented.Erdoğan said the council's work would serve as a guideline for the government and everyone working in urban development.

The council, consisting of 133 representatives from 100 different agencies, from state-run institutions to non-governmental organizations and universities, is the result of "necessary rethinking of urbanization," according to Environment and Urban Development Minister Mehmet Özhaseki.

Özhaseki said urbanization reached a rate of 88 percent and almost 95 percent of the Turkish population will be living in cities by 2050.

The council and its four subcommittees discussed identity of cities, planning and design, and urban transformation projects, which aims to make buildings earthquake-proof or more enduring against disasters.

The subcommittees also discussed the impact of migration from abroad on cities and the role of local administrations in urbanization. A final declaration on the work of the council will be announced later.

Urbanization is the driving force for Turkey's economic growth according to experts while the government seeks to diversify sectors helping the growth.

The construction sector saw a steep rise in revenues with an ever-increasing housing demand especially in big cities like Istanbul, Ankara and İzmir.

As land is becoming scarce and worries remain on possible major disasters in the country that sits on several active fault lines, Turkey has undertaken an ambitious urban transformation project.

Old buildings, mostly those built before the 1999 earthquake that killed thousands of people in western Turkey, are gradually being demolished and property owners are relocated to new buildings as part of the project.