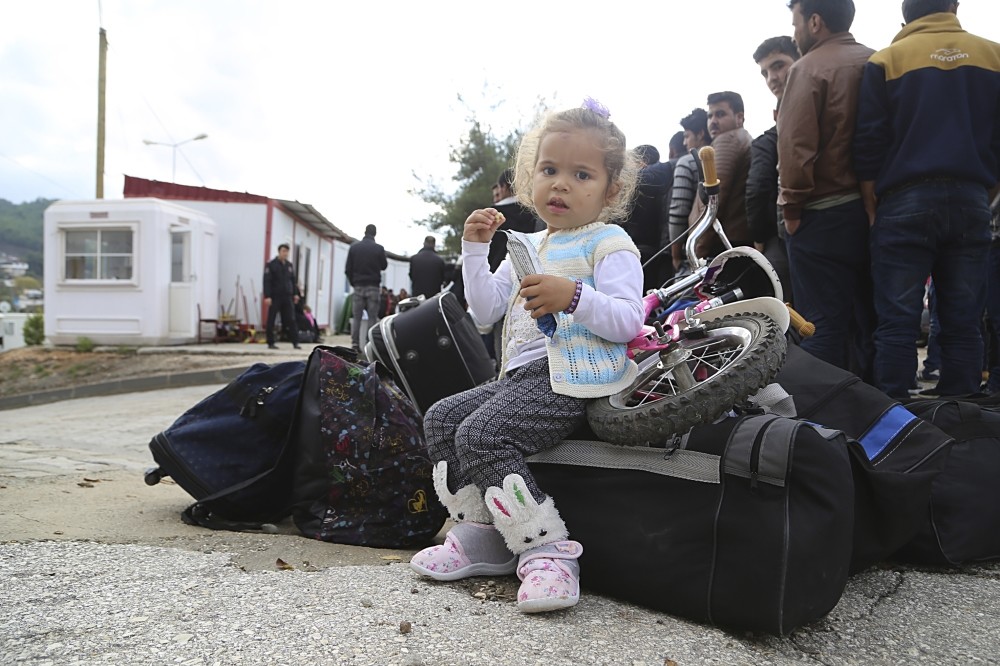 Syrıan refugees in Turkey's southern Hatay province have begun returning to their homes in areas of Syria that are within the de-escalation zones where acts of aggression are forbidden. Refugees from Syria's northwestern Idlib province began leaving Hatay in mid-October after the Turkish military set up a series of observation posts to monitor the de-escalation zone in Idlib.

Nearly 4,000 refugees returned to their homes in the Syrian province during the second half of October, with 1,000 more following suit in the first week of November.

The de-escalation zones were set up as part of an agreement reached during talks held in the Kazakh capital Astana in May between Russia, Turkey and Iran, which serve as guarantor states in the scope of an earlier cease-fire agreement.

After passing through a security checkpoint in Hatay, refugees are now crossing the border back into northern Syria before returning to their hometowns, which have been secured by Turkish soldiers.

Mohamed Keyha, 55, fled to Hatay from his village in Idlib with his wife and two children almost four years ago.

"We decided to go back home after hearing the good news [that Turkish troops had arrived in Idlib]," Keyha told Anadolu Agency (AA).

"I hope the Turkish soldiers do a good job there," he said. "Turkey will always be our second home."

"When I heard that Turkish soldiers were providing security there [in Idlib], I decided to go back to my country," Jemil told AA.

Shadi Mohamed Abdelselam, another refugee from Idlib who has remained in Turkey for the last four years, said: "Now I'll go back to my country. If the cease-fire holds, I'll bring my wife and parents back, too," going on to say: "Most Syrian refugees just want to go back to their homes and live in peace."

Since then, hundreds of thousands of people have been killed in the conflict and more than 10 million displaced, according to the U.N.

Since a deadline for returns expired last month, 6,715 Syrian refugees who left Turkey in August for Syria to spend the Muslim holiday, Eid al-Adha (Feast of Sacrifice), decided to stay. The voluntary returns are concentrated to northern Syrian towns liberated from terrorist groups thanks to the assistance provided by Turkey to the Syrian opposition.

During the Aug. 15-30 period, a total of 53,798 Syrians left Turkey after fleeing the ongoing civil war in Syria. They were allowed to return to their war-torn country for Eid al-Adha (Qurban Bayram), an Islamic holiday followed by Muslims who traditionally spend with their loved ones. Most of those who returned to Syria still had relatives living in the war-torn country. Turkey is home to more than 3 million Syrian refugees, the largest Syrian refugee population in the world. Turkish authorities opened the Öncüpınar border crossing in the Turkish province of Kilis for a rare occasion of allowing visits to the southern neighbor of Turkey.

Almost all of the refugees traveled to their hometowns of Aleppo, Azaz, al-Rai, al-Bab, Jarablus, Mare, Soran and Aktarin. On the other hand, the towns of Jarablus and al-Bab were the first to be liberated from Daesh by the Syrian opposition, backed by the Turkish military, during last year's Operation Euphrates Shield.

Turkey is probably the only safe haven in the region for refugees, with nothing left in Syria except for surviving relatives. A small fraction of refugees stay in modern camps set up in border cities, while the majority live in housing they have rented or bought, often in rundown and abandoned buildings.

The official border crossings were closed in 2015, with exceptions made in cases such as serious injuries, to prevent a spillover of the conflict into Turkey and to stem the flow of refugees. Ankara has also been building a wall along the border to curb the cross-border movement of the fighters.

Turkey is a staunch advocate for the establishment of a safe zone inside Syria for those who have been internally displaced, which would ostensibly prevent attacks on refugees by Assad forces and Daesh, among others.