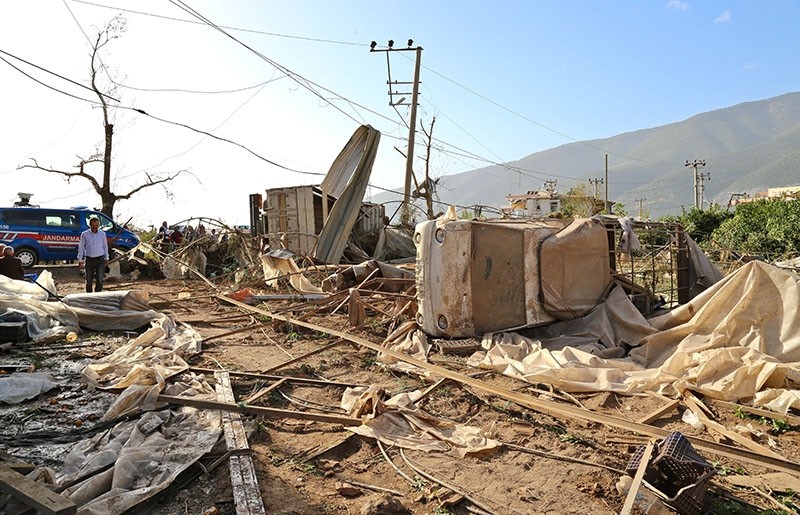 The storm was particularly effective in Kaş, Finike, Demre and Kumluca districts of Antalya province, an area which is among Turkey's largest fruit and vegetable production centers due to its mild weather. The damage caused by the storm is more or less expected to increase food prices in the upcoming months.

Hail in the size of walnuts was also effective in some areas, causing great damage in crops and outer covers of greenhouses.

The storm dismantled roofs and uprooted trees particularly in areas closer to the coastline.

Out of the 25 injured people, 23 were discharged from hospitals early Tuesday, whereas two people continue to receive treatment.

Karaloğlu said that some 75 power poles, including two in main transmission lines, were knocked down, causing blackouts in some areas.

Local units from the Disaster and Emergency Management Authority (AFAD), the National Medical Rescue Organization (UMKE) and firefighters from Antalya Metropolitan Municipality continue to exert efforts in the area to help locals clear the rubble and debris which occured due to the storm.

In Finike, iron casts of greenhouses were scattered by meters due to heavy storm and tornado, which had caused damage in a gas station while trampling a 20-ton truck.

Dozens of buildings and greenhouses were damaged in the district since the tornado moved some 10 kilometers inland.

The new district courthouse construction in Finike suffered great damage with workers staying in container houses said that some containers were dragged by tornado while workers were inside, injuring six workers.