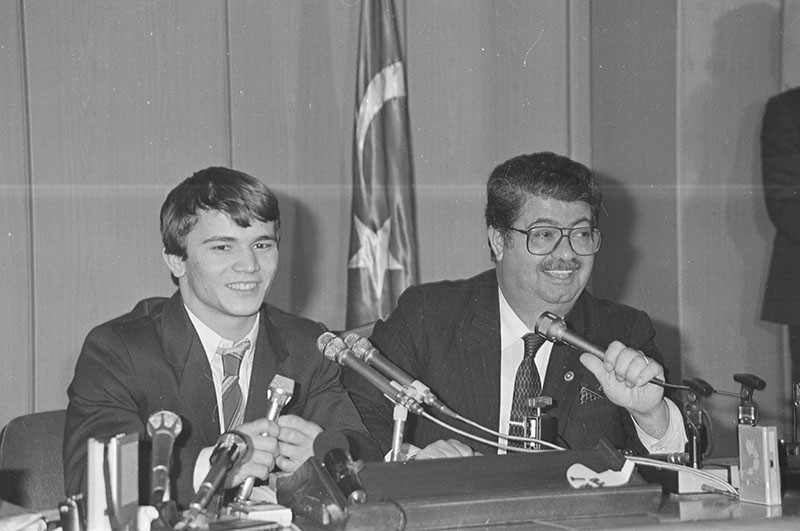 As deceased weightlifter Naim Süleymanoğlu was laid to rest Sunday, the details of his eventful escape from Communist Bulgaria to Turkey at the height of the Cold War once again surfaced.

Ahmet Özal, the son of a late President Turgut Özal, stated that Süleymanoğlu was brought to Turkey through a "war of agents."

Speaking to reporters during the funeral ceremony for Süleymanoğlu in Istanbul's Fatih Mosque, Özal reminded that then Prime Minister Özal was Süleymanoğlu's "godfather," and he feels as if he lost a brother.

Regarding his father's initiatives to bring Süleymanoğlu to Turkey, Özal said: "The information regarding his wish for asylum came to my father. Upon this, we acted through MİT (National Intelligence Organization) agents; of course, Bulgarian agents were also chasing Naim. Ours turned out to be cleverer. They managed to cover their tracks, and he was brought to directly Ankara with the prime ministerial jet. This story could actually be an espionage movie, a war of agents," Özal said.

He added that Özal had to pay $1 million to the Bulgarian weightlifting federation in order to receive permission for Süleymanoğlu to compete under the Turkish flag, which he termed as a "bribe." The payment was made ahead of the 1988 European Championship in Cardiff using the discretionary fund appropriated to the prime minister.

He noted that Süleymanoğlu made the entire country proud, and served for publicity and advertisement of the country that couldn't have been done otherwise.

Süleymanoğlu was born in 1967 to a Turkish family residing in the southern Bulgarian town of Momchilgrad (Mestanlı), located in the predominantly-Turkish province of Kardzhali. He was initially interested in wrestling and football, but he was directed toward weightlifting due his physique, which earned him the nickname "The Pocket Hercules" for his 1.47 meter height.

He was destined to success at the age of just 15 when he broke a world record in a weightlifting championship in Brazil; however, he missed his first chance at Olympic success in 1984 when Bulgaria joined the Soviet boycott of the Los Angeles games.

In the meantime, Todor Zhivkov's regime was carrying out a forced assimilation policy against Bulgaria's Turkish minority mainly residing in the southeastern and northeastern parts of the country. From the mid 1980's to 1989, nearly half a million Turks were forced to flee Bulgaria to Turkey. During that period, Süleymanoğlu was also obligated to change his name to "Naum Shalamanov."

These were the two main motives behind Süleymanoğlu's defection during the Weightlifting World Cup in Melbourne in 1986, where he won the gold medal in 60 kilogram category.

Tayfun Bayındır, the sports section manager of the Turkish daily Milliyet, states that Süleymanoğlu's defection was being planned during the prior year through secret notes. Following his win, he used a brief moment in which he was not monitored by the Bulgarian delegation to escape to a nearby cafeteria where he was taken out by Turkish agents using the back door leading to the restrooms, Bayındır wrote.

Using the advantage of having a sizeable Turkish and Turkish Cypriot community in Australia, Süleymanoğlu was first taken to a Turkish coffeehouse, where another group took him to a mosque. Following the end of the prayer, he was taken to a house, and the Turkish embassy in Canberra was notified of his defection. The embassy then informed Prime Minister Özal of the situation, who ordered Süleymanoğlu to be brought to Turkey immediately.

Süleymanoğlu was first flown to London, and arrived in Istanbul and later Ankara with a private jet.

As the crisis with Bulgaria resolved, Süleymanoğlu, now competing under Turkish flag, made a worldwide reputation in 1988 Seoul Olympics as he broke six world and nine Olympic records, in addition to bringing the first gold medal to Turkey in a field other than wrestling. His successes continued in later years.

He was also invited to the White House that year by U.S. President Ronald Reagan, a fervent anti-communist who is often credited with orchestrating the collapse of the Eastern Bloc.