Real-life ‘Ayla’ by bedside of Turkish soldier who helped her 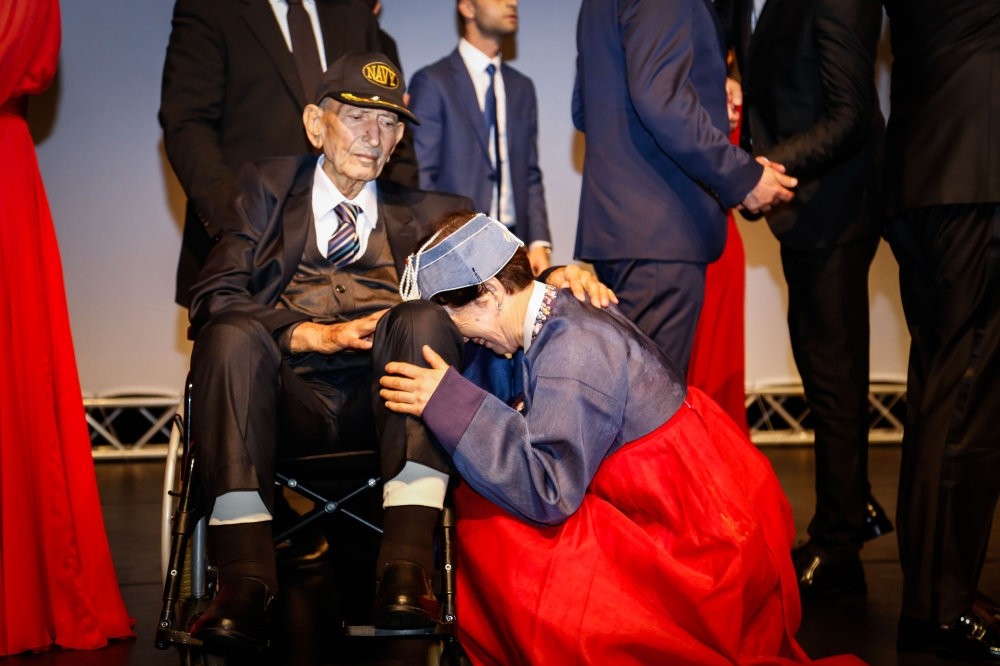 A few weeks after the premier of ‘Ayla,' a film based on the true story of Eunja Kim and Turkish soldier Süleyman Dilbirliği, who adopted Kim as an orphan during the Korean War, the two reunited in Istanbul in an emotional meeting

Eunja Kim and Sgt. Süleyman Dilbirliği, the real-life characters whose story was told in the latest Turkish tearjerker "Ayla," have reunited in Istanbul weeks after the film's debut.

The drama about a Turkish soldier and an orphan Korean girl he took care of for more than a year has captivated the hearts of Turkish public.

Nominated for Best Foreign Language Film at the Oscars, "Ayla" tells the true story of Dilbirliği who fought in the 1950s Korean War and the five-year-old Korean girl he gave the Turkish name "Ayla."

Kim's parents were killed in the war when Dilbirliği found her alone in the woods. He decided to bring her to the Turkish garrison. For 14 months, the Turkish soldier looked after her.

However, when the troops had to return to Turkey after the war, she was entrusted to other troops there. Then, she was transferred to an orphanage.

Though they met before, this latest reunion between 91-year-old Dilbirliği and 71-year-old Kim this time took place at the hospital where the Turkish war veteran is treated for respiratory failure in Istanbul.

Dilbirliği could only gesture with his hands due to his frail health condition while Kim burst into tears upon seeing the man she called "father" in his hospital bed.

Coşkun Yılmaz, head of the culture and tourism authority in Istanbul, who accompanied Kim during the visit, told Anadolu Agency (AA) that it was a "moving" moment showing the longing of "a daughter for her father."

"She grasped her hands and burst into tears. I saw her 'father' responding when she hugged him. A doctor told us that it was the first time the veteran soldier responded in days," Yılmaz said.

The South Korean woman has said in earlier interviews that her life after she was forced to part ways with the Turkish soldier was "spent missing him."

When Dilbirliği, during an Istanbul event to mark the 60th anniversary of the Korean War, talked about Ayla, South Korean officials began a search to locate the girl.

The two finally met in 2010 in South Korea in an emotional reunion and frequently wrote each other over the years. Eunja Kim had recently visited Turkey for the premiere of the film.

Turkey joined the Korean War under the U.N. command during 1950 and 1953 in efforts to support South Korea in its struggle for freedom, democracy and independence, where a total of 741 Turkish troops were killed during the war.

The Turkish sacrifice in the war coined the term "blood ally" for Turks in South Korea.