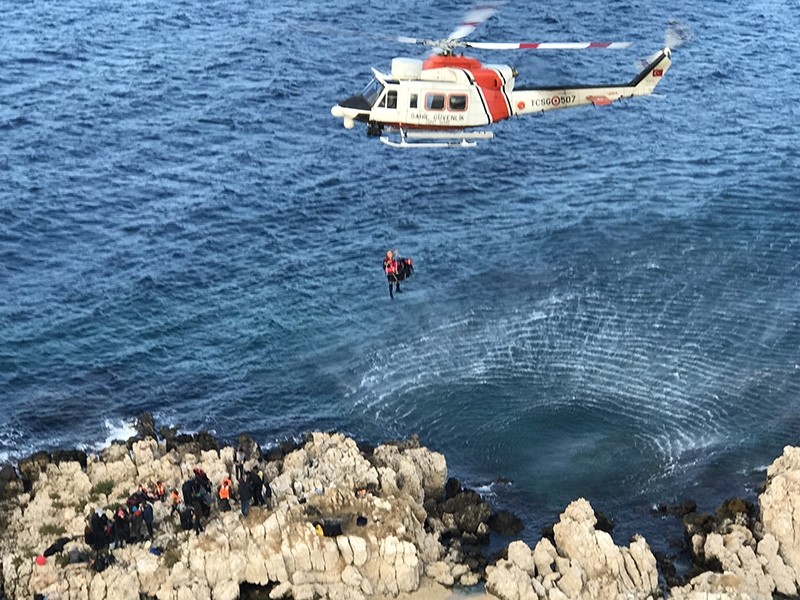 The Turkish Coast Guard rescued 51 migrants, including children, Thursday stranded on a small rocky islet in the Aegean Sea.

The migrants were trying to reach the Greek Islands when the inflatable boat carrying them got stuck on an islet near the Dikili district of İzmir, Turkey's third-largest city.

The coast guard teams airlifted four children, while the others were transferred to safety in boats.

Authorities said they received a distress call from an unidentified person seeking help for "some 80 migrants" stranded on a rocky islet in an unspecified location at around 1:12 a.m. yesterday. The migrants were located, but bad weather hampered the rescue efforts. In the morning, Coast Guard crews airdropped food and blankets to the migrants and later airlifted six. Four Coast Guard boats were later able to reach the islet and evacuate the rest of the migrants.

Anadolu Agency (AA) reported that the migrants were from Afghanistan, Syria, Angola and Somalia. 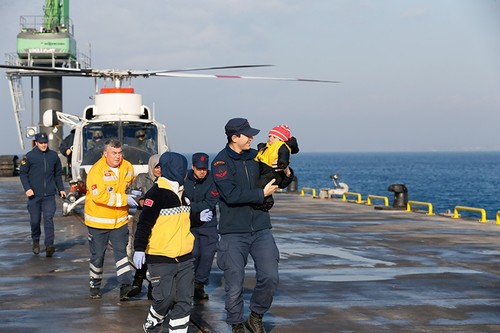 In another part of Dikili, gendarmerie officers intercepted 25 migrants from Afghanistan, Ghana and Eritrea, including five children, as they were about to board a boat from a secluded bay. Near the same spot, seven Syrian migrants were stopped by the Coast Guard before embarking on a boat to Greece.

Elsewhere, 101 migrants from Afghanistan and Syria were found on two beaches in the Ayvacık district of Çanakkale, north of İzmir. Gendarmerie officers flying drones to comb secluded areas for illegal immigrants discovered them waiting to board boats arranged by human smugglers. The migrants were planning to travel to the nearby Greek island Lesbos.

Turkey is a main route for refugees trying to cross into Europe, especially since the beginning of the civil war in Syria, located just south of Turkey. The country is both a transit and final destination for migrants, particularly from Syria, Afghanistan, Pakistan, Iran, Iraq, Congo, Bangladesh, Somalia and the Palestinian territories.

In recent years, hundreds of thousands of people have made the short but perilous journey across the Aegean Sea to reach Northern and Western Europe.

Many died at sea when a number of boats carrying refugees sank. The Turkish Coast Guard has rescued thousands.

In March 2016, Turkey and the EU signed a deal to discourage irregular migration through the Aegean Sea by taking stricter measures against human traffickers and improving the conditions of some 3 million Syrian refugees in Turkey.

Since then, the number of refugees detained crossing the Aegean Sea between Turkey and Greece has fallen 85 percent, according to the Turkish Coast Guard. Still, a small number of migrants continue to risk their lives on a daily basis to reach Greece, while EU countries bicker over quotas on the number of migrants each supposedly should take and the burden of hosting refugees.

At the height of the migrant crisis in 2015, more than 857,000 migrants reached Greece from Turkey.

The highest number of migrants intercepted by the Coast Guard was in September this year when authorities caught a total of 3,408 migrants offshore.

Since the beginning of 2017, at least 51 people have lost their lives in the dangerous sea journeys.

Over the past seven years, the country has intercepted more than 640,000 irregular migrants.

Turkey earlier called on NATO to end patrols in the Aegean Sea due to the significant drop in migrants leaving the Aegean shores of Turkey.