Decade of restoration for churches, synagogues in Turkey 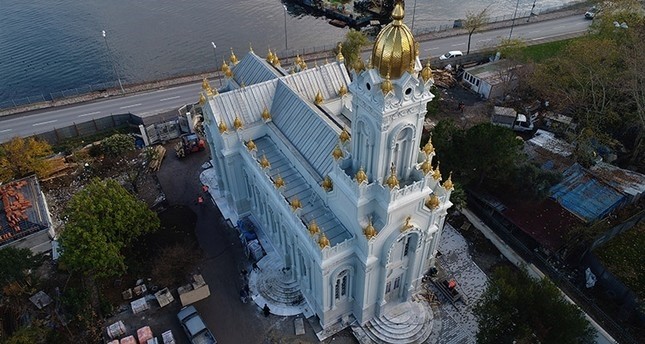 Although the number of devoted followers of Christianity and Judaism visiting the country has slowed down in the past few years, Turkey's drive to upkeep and revive ancient churches and synagogues has not.

The Directorate-General of Foundations, the state-run authority behind the restorations, has been gaining momentum with new projects to conserve and maintain the country's diverse cultural heritage.

In the past two decades, it has so far completed the restoration of 14 places of worship belonging to the Christian and Jewish communities and more projects are underway.

The directorate, which coordinates restoration with foundations traditionally run by religious minorities, has also completed the restoration and renovation of the Great Synagogue in the border city of Edirne, Aya Nikola Church on the Aegean island of Gökçeada, the Assyriac Catholic Church in the southern port city of İskenderun, the Armenian Protestant Church in Diyarbakır's Sur district, Gaziantep's Fevkani Church, Taksiyarhis Church on Cunda island, and the Aya Yorgi and Sveti Stefan churches in Istanbul.

Moreover, restoration projects are currently underway for Turisina Monastery in Istanbul, a synagogue in the southern city of Kilis, a chapel on Gökçeada and an Armenian church in Hatay province's Samandağ district.

However, the most high-profile restoration work is probably Sveti Stefan, which will open its doors to the faithful and visitors, in a ceremony that will be attended by President Recep Tayyip Erdoğan and Bulgarian Prime Minister Boyko Borisov on Jan. 7.

A 19th-century church built by the Bulgarian community in Istanbul, it is an Istanbul and world landmark due to its unique features. Also known as the "Iron Church," it is the only church in the world that is made mainly of iron.

The restoration at the site started seven years ago in a project co-funded by Turkey and Bulgaria. The church, whose restoration has cost TL 16 million, is located in Balat, a historic neighborhood on the shore of Istanbul's Golden Horn.

An outstanding symbol of the Bulgarian Orthodox faith, the church was built in 1898 on the site of a wooden church destroyed in a fire. With its three domes and rich exterior decoration, the church stands out among many other Orthodox churches in Istanbul.

Figures compiled by Anadolu Agency show that Turkey hosts 167 foundations that run churches and synagogues. The Greek Orthodox community has the most foundations with 77, followed by 54 Armenian foundations and 19 Jewish foundations.

Foundations are the only way for minorities to preserve their heritage and most were deprived of their properties under harsh state policies dating back to early years of the Republic.

Between 2003 and 2014, a set of legal regulations enabled the return of 1,029 properties to minorities while the state accepted to pay the value of 21 properties to the minority-run foundations.

Authorities are currently working on a set of regulations to allow independent elections at minority-run foundations. It will give broader freedom to communities that are mostly concentrated in Istanbul after decades of discriminatory policies and tight control by the state.

The election issue overshadows democratic rights for minorities. Although recognized minority groups are free to elect their own foundation members, they are still subject to inspection by the state and need the approval of authorities.

Since the ruling Justice and Development Party (AK Party) came to power in 2002, Turkey has sought to restore the rights of religious minorities as well as the worship houses of faithful minorities, ranging from Assyrians to Jews and Greeks.

Many properties have been returned to these minorities – decades after they were forcefully confiscated by the Turkish state.

The Directorate-General of Foundations where the minorities are represented by one member, seeks to expand the number of foundations belonging to non-Muslim minorities and recently acknowledged a Greek Orthodox-run foundation for a girls school, a Jewish foundation based in western city of İzmir as well as foundations for an Armenian high school and church in Istanbul.

A new law enacted in 2008 enables foundations to receive donations from overseas and religious minority foundations. Since then, the foundations have received more than $2.4 million and 3.2 million euros from donors abroad.