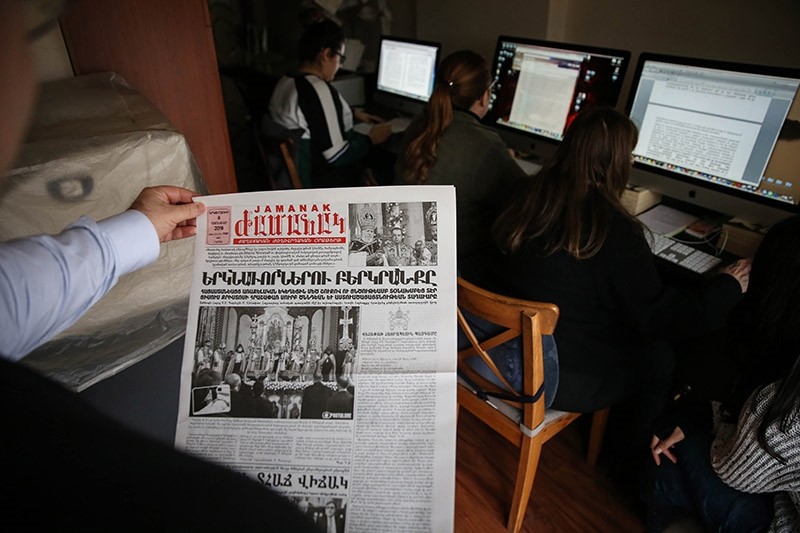 This year marks the 110th anniversary of the world's longest-running minority newspaper, Jamanak, which has chronicled history since its first publication in Turkey's most populous city of Istanbul.

Established by the Armenian brothers Misak and Sarkis Koçunyan in Oct. 1908, Jamanak -- which means "time" in Armenian -- has been published as an evening newspaper for the last 80 years.

Being one of the major newspapers of its time with a circulation of 15,000 and delivered as far as the Balkans and Egypt, the paper witnessed the collapse of the Ottoman Empire and the birth of the Turkish Republic.

Though its current weekly circulation is only 10 percent of the initial figure, the daily still covers a wide range of subjects, including arts, science, politics, and sports with its 10-member staff.

The newspaper also launched a digital version in 2013, thanks to which it now enjoys worldwide availability.

After Misak Kçcunyan and Sarkis Koçunyan, Jamanak remained in the hands of the Koçunyan family and was finally passed down to its present head Ara Koçunyan, a fourth-generation member of the family, in 1992, when he became the youngest editor-in-chief in the world at 23.

Printed in Istanbul's Feriköy quarter of the Şişli district, Jamanak is delivered to the doors of Armenian Istanbulites by a team of six-seven.

Istanbul Armenians speak a different dialect of the language called the "Western Armenian", which is also used by Jamanak.

According to Editor-in-Chief Koçunyan, Jamanak was not a minority newspaper in the beginning.

He said Sarkis Koçunyan, one of the founders of the paper, was also the founder of one of the first press agencies in the Ottoman State in addition to being an entrepreneur.

Ara Koçunyan said the readers of Jamanak were marked by three characteristics: "They are citizens of Turkish Republic, they have Armenian origins, and they are mostly members of the Armenian Apostolic Church."

The newspaper covers Turkish politics, world politics, developments in the Armenian world, but most importantly, issues that are of concern to the Armenian community in Istanbul.

"We have a publishing policy of focusing on the problems of the community's institutions and individual members. In addition, the agenda of Armenia and relations between Turkey and Armenia are reflected in our newspaper," Koçunyan said.

Regarding freedom of the press in Turkey, Koçunyan said this notion mattered a great deal to Jamanak's staff.

He said they received many questions, inquiring whether Jamanak was exposed to any problems for simply being an Armenian newspaper.

"We don't face any specific problems in regard to printing in Armenian, neither from the public nor from civil society… I can express this happily," Koçunyan said, adding that they tried to be objective in their coverage of issues related to Turkish-Armenian relations.

"We are affected by the challenges of the media sector in the country but I think the overall approach to the minority media is positive in Turkey," he said, pointing out that they did receive subsidy from the state however nominal it may be.

"These are very hope-inspiring developments that encourage us in our walk in this path. I think it is very positive in terms of demonstrating the state's approach."

He also said that the Armenian community of Istanbul was the biggest supporter of any normalization in the relations between Turkey and Armenia.

Istanbul houses other Armenian minority newspapers, such as Agos, Marmara, Paros and Luys, as well as a publishing house called "Aras", which mainly prints Armenian literature and works on Armenian culture.