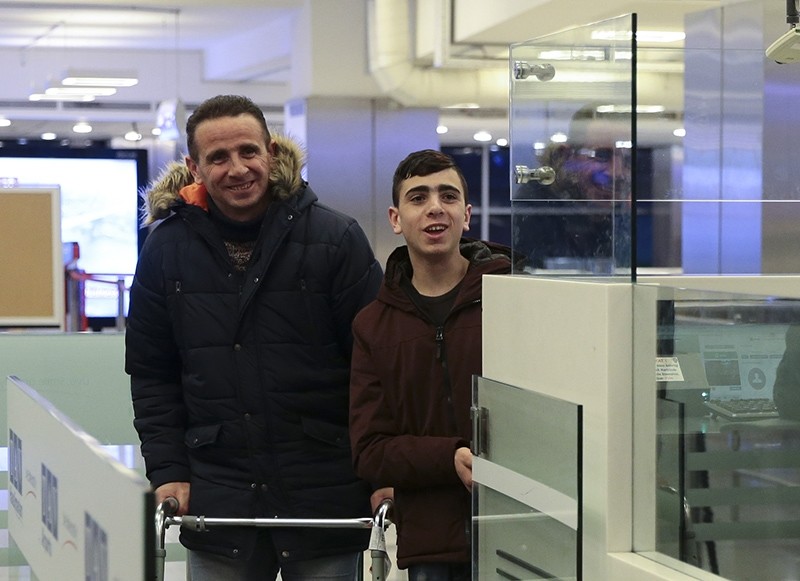 Fawzi al-Juneidi, whose photo of being dragged away blindfolded by dozens of Israeli soldiers made him a symbol of Palestinian protests against the controversial U.S. decision on Jerusalem, arrived in Turkey for a visit during which he is scheduled to meet President Erdoğan.

The Palestinian boy, whose photo of being dragged away blindfolded by dozens of Israeli soldiers has gone viral, arrived in Istanbul on Tuesday.

Fawzi al-Juneidi became the symbol of the Palestinian protests against U.S. President Donald Trump's decision to recognize Jerusalem as the capital of Israel after he was arrested Dec. 7 in the West Bank city of Hebron.

Accompanied by his father, Juneidi arrived in Istanbul's Ataürk Airport where he was greeted by Esenler Municipality officials, who invited the 16-year-old for a three-day event. During his stay in Turkey, Juneidi will speak to high school students about his experience.

Speaking to official Anadolu Agency (AA) upon his arrival, Juneidi said he learned about his "fame" only after he was released from prison.

"We did not see anything in jail. They have banned all electronic devices, telephones and TVs. I did not see anything while I was there. There was only one television and there were only certain channels. We could not follow anything from those channels. Israel did it on purpose. I was only able to see my famous photo after I got out of prison," Juneidi said. 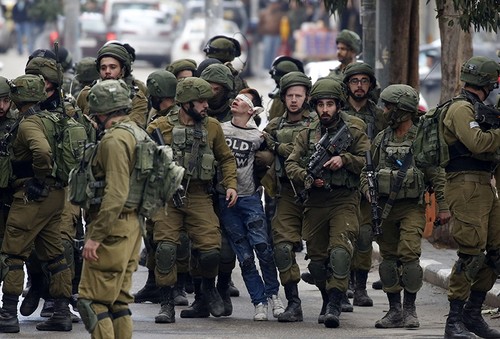 The Palestinian teen also thanked the Turkish nation and President Recep Tayyip Erdoğan — who is expected to receive him during the visit — for the solidarity they demonstrated.

"I heard about President Erdoğan's remarks about me and I was very happy. We love him very much," he said.

Erdoğan showed the now famous photo of Juneidi during a press meeting and condemned Israel for the maltreatment of the boy.

"If those [soldiers holding the boy] are not terrorists, who then is a terrorist? Israel is a terrorist, occupying state. It is merciless to have soldiers armed to the teeth to treat this young boy like that. This is an instance of terrorism. Mr. Trump should see this and not remain silent. If you consent to someone to being terrorized, then you are an oppressor as well. This boy is oppressed, he is not a terrorist," Erdoğan said in December.

Juneidi also said he is expected to undergo several surgeries due to the injuries he suffered from Israeli soldiers' beating.

"Hopefully, I'll get well soon. My arm and shoulder still hurt," he said.

Juneidi was released on bail by Israeli military Dec. 27 after 20 days of detention.

Turkish officials have been welcoming Palestinians who have suffered mistreatment by Israeli forces.

In December, Mohamed al-Tawil, 29, a young Palestinian with Down syndrome who was detained for an hour by Israeli troops in Hebron, came to Turkey upon invitation from the Health Ministry and was received by Erdoğan at the Presidential Palace complex.

Trump's announcement that the U.S. would recognize Jerusalem as the capital of Israel prompted a deluge of criticism from the international community and was rejected in a U.N. vote. Naturally, it triggered a wave of protests in Palestine. Palestinians claim east Jerusalem, home to Muslim, Jewish and Christian holy sites that Israel captured and annexed in the 1967 Six-Day War, as the capital of a future state.

Turkey, which maintains close ties both with Hamas-ruled Gaza and the Palestinian Authority in Ramallah, champions the Palestinian cause against Israeli occupation and has spearheaded the initiative for a common stance against Trump's decision on Jerusalem in the Muslim world. Thousands of Turks attended rallies for days in December to protest Washington's move and the Israeli oppression of Palestinians.