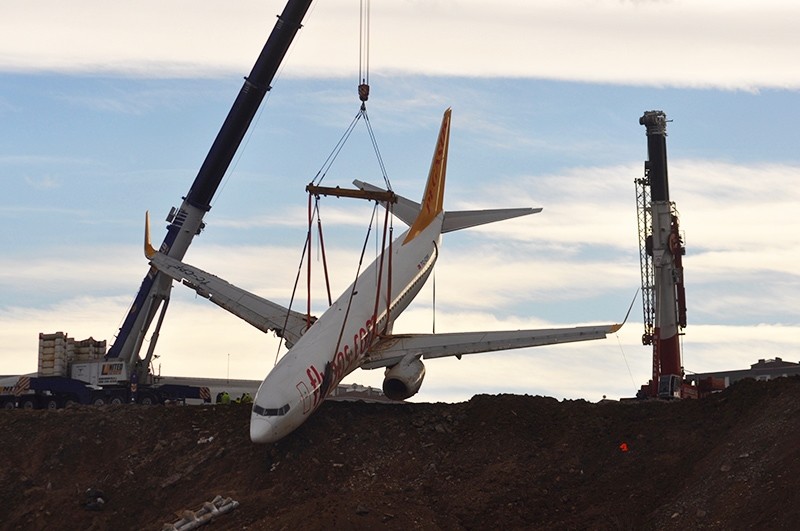 Turkish authorities completed lifting of a passenger plane that skidded off a runway in northern Turkey's Tranzon and stopped on the side of a slope meters away from the Black Sea.

The Pegasus Airlines Boeing 737-800, with 168 people on board, left the runway after landing at Trabzon Airport on Jan. 13. All passengers and crew were evacuated and no one was injured.

Since then, it has remained on the steep slope that descends from the airport apron into the sea for four days, its nose pointing down and managing to defy gravity by being stuck in thick mud.

The Turkish aviation authorities closed Trabzon airport from 0100 GMT to all air traffic so that the salvage operation can take place, with flights diverted to the nearby Ordu-Giresun airport, also on the Black Sea.

Ambulances and fire extinguishing trucks were on standby Thursday as the crane lifted the plane up the slope. Workers involved in the recovery operation posed for a group photograph in front of the half-dangling plane.

Once it was back on the runway, it was emptied of remaining fuel, taken to a hanger, where the baggage and personal possessions of the passengers will finally be removed.

Turkish media said the pilots told investigators that the plane's right engine experienced a sudden surge of speed that forced it to swerve to the left, toward the sea.