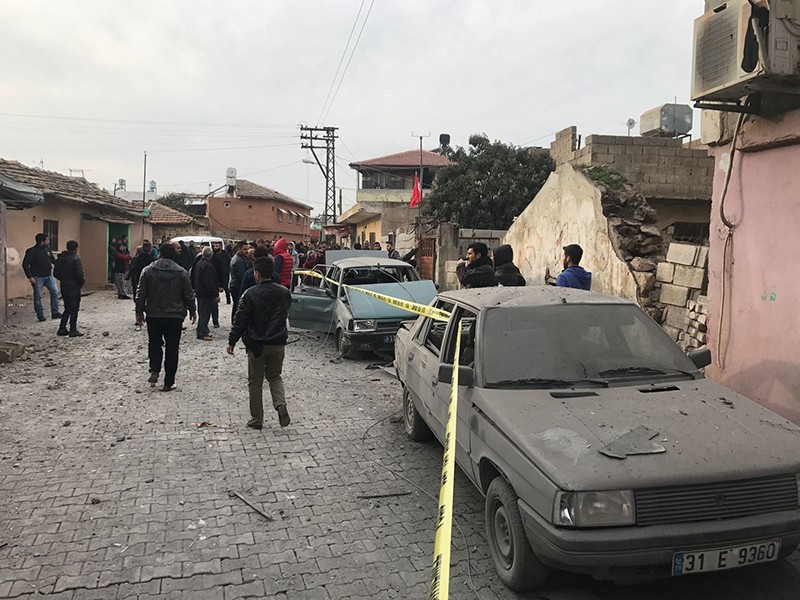 One Syrian national died and dozens of others were injured by cross-border rocket fire in southern Turkey's provinces of Hatay and Kilis on Sunday as anti-terror Operation Olive Branch entered its second day.

Nine of these incidents happened inside the residential area, while two others occurred outside.

"Forty-seven people were wounded in the explosions. Thirty of them are Turks, 17 of them are Syrians. Unfortunately, later, one of our Syrian guests lost his life," the governor said.

He said four injured were in critical condition and under medical treatment. "Forty-two injured are discharged after outpatient treatment."

The governor also said a total of 15 vehicles, four houses and 10 workplaces were damaged in the blasts.

Earlier it was reported that Reyhanlı district was targeted by four rockets; one hit a house on Rıfat Bahadırlı Street in Reyhanlı and the other one hit a workplace at Cumhuriyet Street.

Third rocket hit Tayfur Sökmen Street while another hit the roof of a four-story apartment.

Ata said that the attacks are believed to be carried out by YPG terrorists from Afrin, casting doubt on the nature of ammo fired.

"We think that it is likely a rocket but it may be missile, too. Our crime scene investigation teams are carrying out their work [in the area]," Ata said, adding that the clear results would be given when the works are completed.

Southeastern province of Kilis was also hit by four rockets launched from Afrin on Sunday evening.

According to initial reports, the rockets which were launched by PYD/PKK terrorist members in Afrin, hit four houses in central Kilis' Ekrem Cetin and Barış neighborhoods.

Seven people, including two Syrian nationals, who were injured in the attack were referred to the state hospital in Kilis, according to the city's governor Mehmet Tekinarslan.

The attack was responded by Turkish artillery units stationed in the region.

Kilis was first hit by four rockets early Sunday, which struck a neighborhood in city center and slightly injured one Turkish citizen.