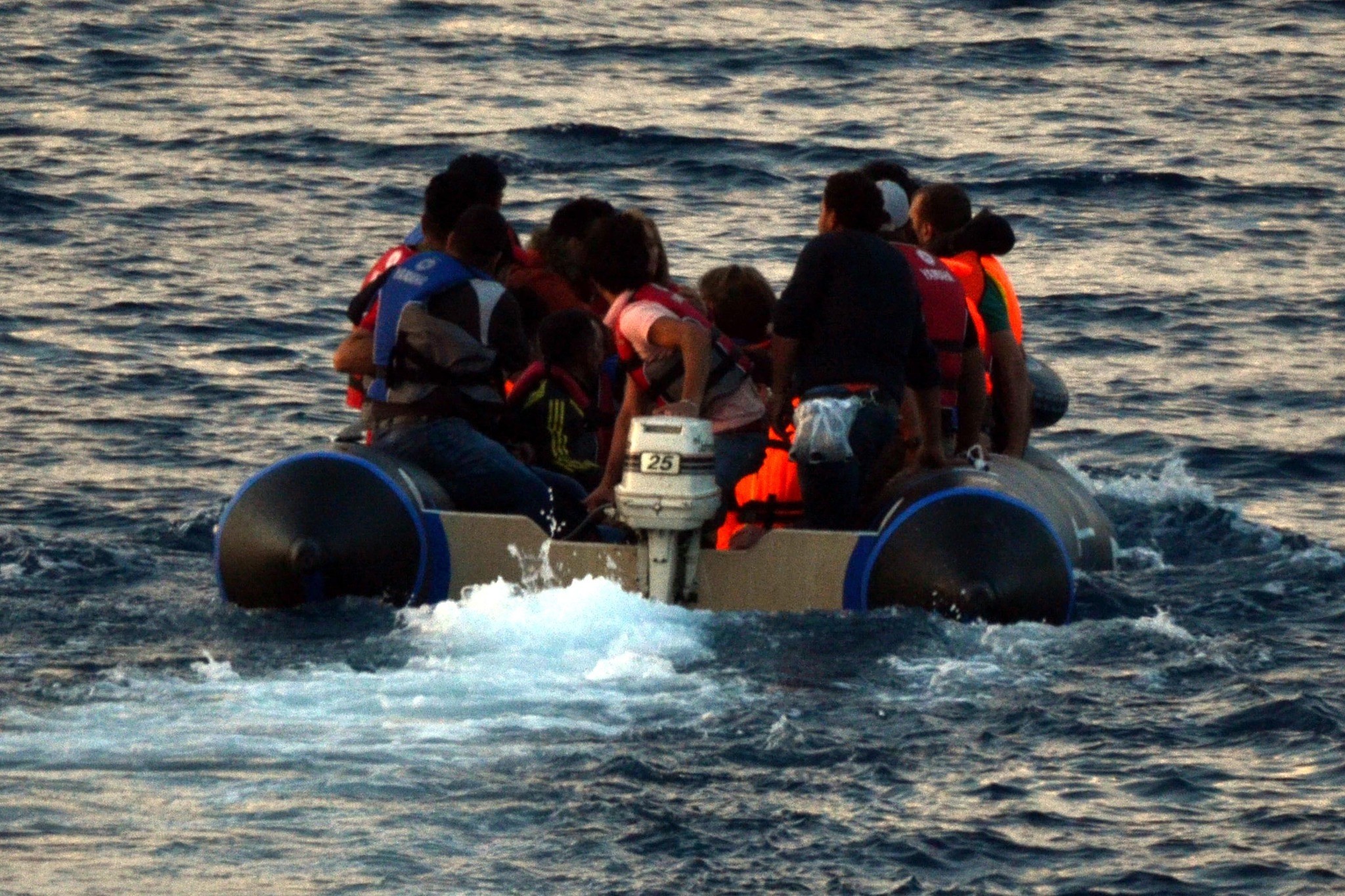 Migrants aboard a boat en route to Greeceu2019s island of Kos from Bodrum, a Turkish town on the Aegean Coast. Coastal towns have seen a surge in irregular migrants seeking to reach nearby Greek islands in the past years.
by Selva Ünal Feb 14, 2018 12:00 am

Despite the fact that the number of irregular migrants crossing to Greece from Turkey over the Aegean Sea dropped below 22,000 last year, many continue to take the perilous journey to Europe, with the Coast Guard having intercepted some 1,640 people last month

Once swarmed with dinghies packed with migrants, the Aegean Sea is relatively calm in the winter. This is due to a deal Turkey and the European Union struck two years ago to stop the refugee influx to Europe. Yet still, many people take the risky route to Greece, their gateway to Europe, on unsafe vessels from Turkish shores. In January alone the Turkish Coast Guard intercepted 1,640 illegal immigrants, most of them Syrians, Afghans, Pakistanis and Iranians.

Syrians refugees have long comprised the majority of migrants crossing over to Europe from Turkey, which hosts the largest Syrian refugee community in the world, at above 3 million. After the Syrian civil war broke out in 2011, more displaced people arrived in Turkey, a rare safe haven for refugees in the region. As a result, the number of people seeking to reach Europe via the country also increased.

In 2015, crossings through the Aegean, where Greek islets lie in close proximity of Turkish shores, reached 91,611 in one year, excluding the number of those the Coast Guard could not intercept. A year later, Turkey and the EU reached an agreement to return the migrants taken in by Greece to Turkey, in exchange for receiving Syrian refugees settled in Turkey. In 2016, the number of intercepted migrants dropped to 37,130 and went further down to 21,937 last year.

Last month, Turkish authorities also nabbed six human traffickers. Smuggling migrants to Europe have long been a lucrative trade for criminal gangs that use secluded spots on Turkey's lengthy Aegean coastline as for these dangerous journeys. Official figures show that the Coast Guard tackled 41 cases of mass illegal immigration in January and also stopped 378 migrants before they boarded the vessels.

More importantly, no casualties were reported in January. There had been numerous reports of death after a number of overcrowded makeshift boats sank off the Aegean coast over the past years. In December, only one case of drowning was reported.

Meanwhile, a boat carrying 10 illegal immigrants reportedly sank in Evros (Meriç) River between Turkey and Greece in northwestern Turkish Edirne province yesterday. The body of two children, aged three and five and a woman in her 30s and the wreckage of an inflatable boat believed to have been carrying the migrants were found near the site at the time Daily Sabah went to print. A search was underway for the missing. The incident was revealed after one of the migrants called on soldiers patrolling a military zone, asking for help to rescue his child. The soldiers then notified the local Disaster and Emergency Management Authority (AFAD) units. The river currently runs at a higher flow rate due to the recent rainfall in the region.

Migrants prefer using the river to cross into Europe due to lower water levels in the summer months, but crossings are low in the winter. Still, it remains a popular alternative route both for migrants and terror suspects looking to flee to Europe. The intercepted migrants had claimed in earlier cases that Greek authorities often "push back" their boats, a controversial practice deemed illegal under international conventions.