Grief, anger as families bid farewell to 4 killed at university 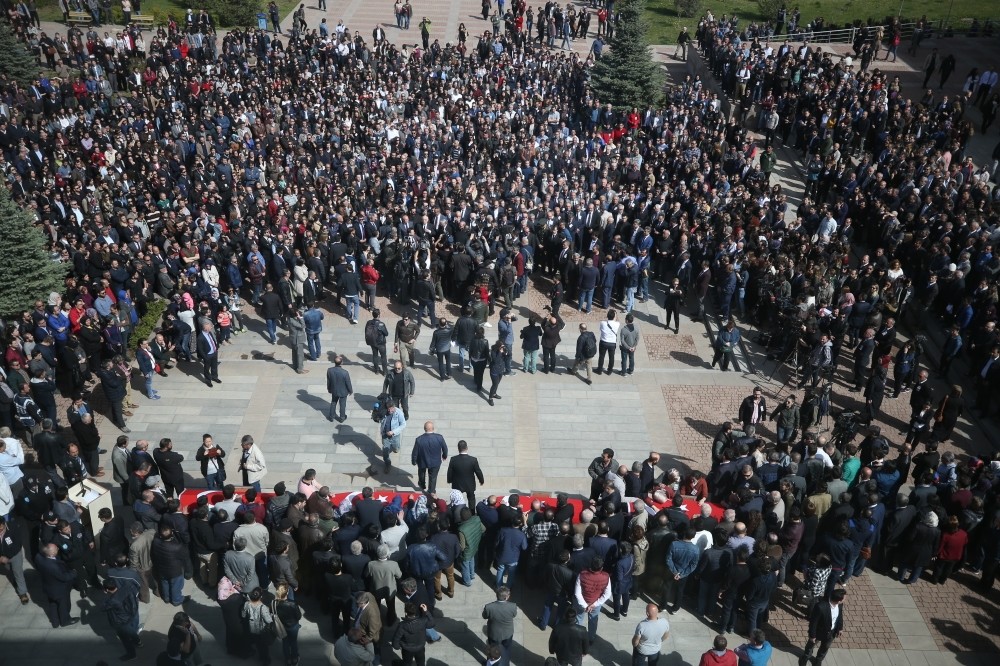 The funeral ceremony for the four shooting victims at Osmangazi University on Friday.
by Compiled from Wire Services Apr 07, 2018 12:00 am

A ceremony and funeral prayers were held on Friday in Eskişehir for four university staff members killed by a disgruntled colleague in this western city on Thursday. Families were angered by the university's president who they accused of inaction against the shooter despite their earlier complaints.

Volkan Bayer, a research fellow in the Faculty of Education of Osmangazi University, stormed the offices of a deputy dean, a secretary and two academics and shot them dead before his arrest by police. In his first testimony to the police, he said he was angered by complaints filed by Yasir Armağan, an academic among the victims who had accused Bayer of verbal and physical assault. Friends and families of victims as well as Bayer's colleagues told media outlets that the shooter filed complaints in court against many staff members, accusing them of membership in the Gülenist Terror Group (FETÖ). Several academics were even tried in court where Bayer served as a witness, but they were cleared of charges.

During a funeral ceremony at Osmangazi University, University President Hasan Gönen faced protests by parents and relatives of one of the victims. Police prevented an assault on Gönen whose administration was accused of ignoring previous complaints against the shooter made by other academics. Academics speaking to reporters have claimed Bayer tried to ruin their lives by falsely accusing them of FETÖ membership. Authorities declined to comment on the complaints, while an investigation is still underway. Aylin Bayer, ex-wife of the shooter who also worked at the same university, was also detained.

Yalçın Bay, an academic suspended from work at the university upon complaint of the shooter, told reporters on the sidelines of the funeral ceremony that he petitioned for legal action against Bayer, but "nobody did anything." "I lost four friends. If he is mentally ill as claimed, why was he issued a gun license?" Bay asked. Cemil Yücel, dean of the education faculty, said on Thursday that Bayer was not mentally sane and "a feared person" on campus.