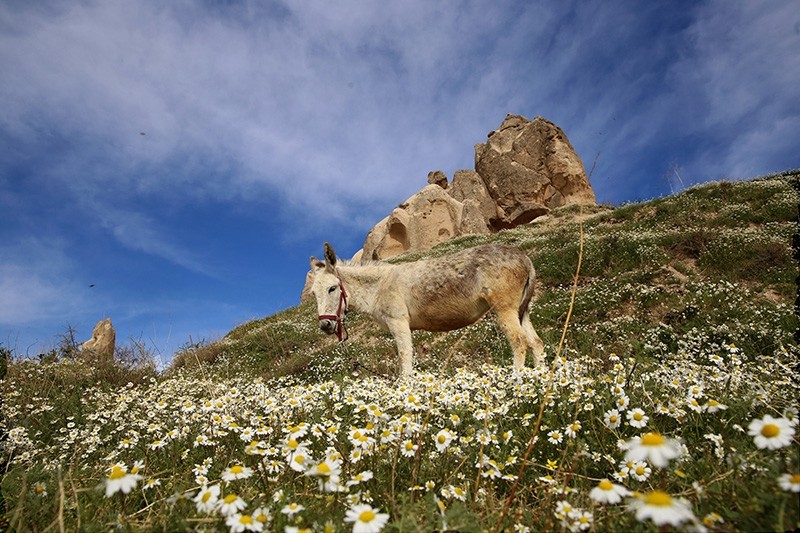 A donkey grazes in a field near Cappadocia in Turkey's central Nevu015fehir province (AA Photo)
by Anadolu Agency Apr 08, 2018 12:00 am

The winter season of 2017-2018 has been the second warmest on record in Turkey since 1971, according to an official from the country's meteorological service.

The warmest winter season was recorded in 2010-2011 with an average of 6.8 degrees Celsius, Güneş noted.

2017 is the third hottest year ever recorded on the planet, considering the measurements made since 1880, according to World Meteorological Organization (WMO).

Güneş noted that the changing climate has led to the decrease in the average annual snowfall. "But, it is too early to say that the tropical climate will prevail in the country in the future."

According to climate projections by the meteorological service, the average annual temperature will increase 1-2 degrees Celsius by 2050.

Noting that the rising temperature is negatively affecting the quality and quantity of agricultural production, Güneş said the trend may lead to a rise in the number and severity of the heat waves, storms, and whirlwinds.

He said there is a risk of excessive rainfalls especially in the country's western and northern coastal areas and that the changes in precipitation levels can cause floods in coming years.

"These happenings, which are influenced by climate change, are mostly human-caused disasters which depend on various factors, including unplanned settlements, wrong selection of settlements, disturbance in natural equilibrium due to the destruction of forest areas, and so on."

Güneş noted that there has been a significant upward trend of meteorological disasters -- including storms, floods, hails, avalanche, drought and forest fires -- since 2000 due to climate change.

According to the department, 400 warnings related to storms, snowmelt, avalanche, landslide, agricultural frost, hot/cold airwaves and floods were issued in 2017.