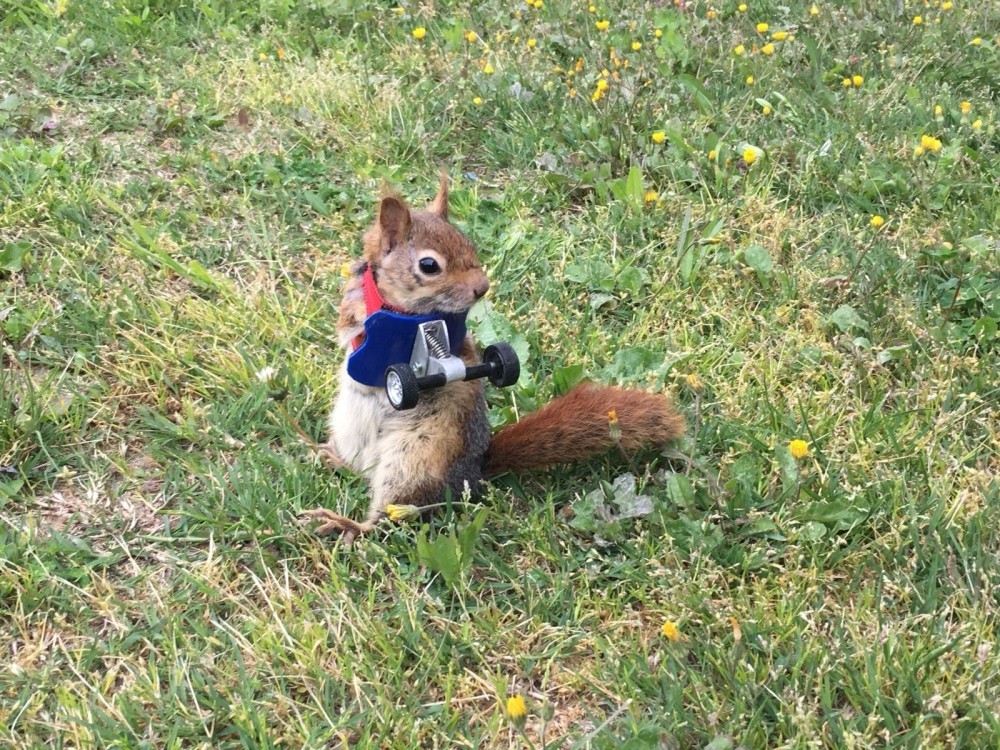 Karamel can now walk or run with the implanted wheels though it will take time to climb trees, a carer says.
by Daily Sabah with IHA Apr 10, 2018 12:00 am

Having lost its arms to a poacher's trap in eastern Turkey's Batman, a squirrel has been implanted with a brand-new pair of wheels.

"Karamel," as it was named by its surgeons, recovered after two surgeries last month in Istanbul. Surgeons operated on the furry creature, saying it now freely roams without any hassle and in good health.

The prosthetic arms or rather, wheels, is first of its kind applied to a squirrel, according to Turkish doctors.

Demir, a university student who joined forces with doctors to nurse Karamel to its old health and adopted it, showed the squirrel to journalists as the animal frolicked in his house's courtyard.

"The prosthetic arms were developed after we brainstormed on how we could help Karamel. We had ideas and models that would simply help the animal to move or run but it also needed functional arms so that it could eat, drink, defend itself and sleep comfortably. Size and rotation of wheels were carefully planned. With spring placed between wheels, Karamel can easily bend and eat. It is also a light piece," he said.

He added that Karamel now has no problems after it passed a test phase where its movements were monitored and controlled by doctors.

"It used to tear apart bandages and we controlled its movements for 15 days," Demir said.

Now, one obstacle remains in full recovery of the squirrel and that is, to regain its ability to climb up trees. Its owner says they don't want to keep it confined to the courtyard and will place it in a more natural environment, a "garden" designed for Karamel.

"It has a hard time keeping its balance at times but it will adapt in time. Karamel did not lose its natural ability to climb and I believe it will be able to do it within a few weeks," he added.