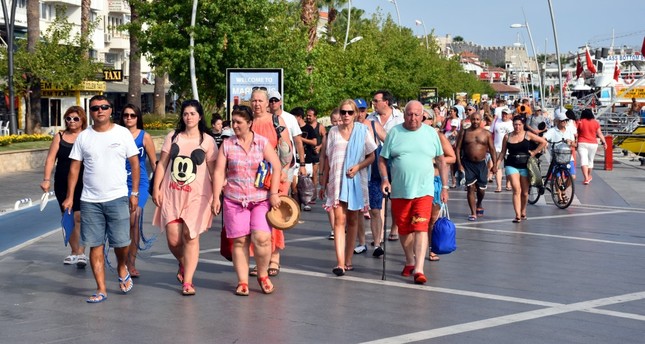 Tourists stroll in Muğla, a popular destination for British holidaymakers.

Fed up with British holidaymakers faking poisonings and injuries at their hotels, Turkish hoteliers are setting up new departments to investigate and debunk allegations by accusers seeking compensation

An unfortunate trend among British vacationers seeking compensation by falsifying sickness and injury while staying at hotels in Turkey has prompted hoteliers to come up with ways to defend themselves.

Bülent Bülbüloğlu, deputy chair of the Federation of Turkish Hoteliers (TÜROFED), says contracts by tour operators include clauses that say verdicts of U.K. courts are valid in case of a dispute, adding that it enables operators to deduce court fees from payments to hoteliers if the operator is ordered to pay compensation to tourists. "This makes both them and us victims," Bülbüloğlu told İhlas News Agency. He said compensation demands by Britons through false claims "peaked" last season and it also "drives fellow hoteliers in Spain, Morocco and other popular destinations crazy." Spanish hoteliers even considered scrapping all-inclusive packages for British vacationers to combat false claims of poisoning by hotel food, British media outlets reported last year.

British tabloids have been awash with stories of vacationers falling ill after consuming food in Turkish hotels. Bülbüloğlu says pressure from tourism sector professionals in the British government has resulted in less verdicts against hoteliers. "The courts used to rule against us in all cases, but nowadays, four in every 10 verdicts against hoteliers are being rejected."

Still, the "British plot" is far from over for hoteliers, Bülbüloğlu says, noting that hoteliers offering all-inclusive packages are setting up claims departments and recruiting staff with "detective skills." "They keep all the records that might be requested by courts, from certificates to reports on food. If a tourist claims they fell ill from eating hotel food, they have reports on the state of the food and state of other customers who consumed the same food. They have set up cameras everywhere to counter allegations that tourists slipped on floors and have reports prepared on the nature of floors, including if they are slippery or not etc," Bülbüloğlu added.

Turkey's Muğla, home to vacation resorts like Bodrum and Marmaris, are among the most popular destinations for British tourists. Thomas Cook, one of the world's largest U.K.-based travel agencies, recently reported that package holiday bookings to Turkey are currently up 84 percent year-on-year. Some 1.66 million British tourists traveled to Turkey last year, a drop compared to 2.5 million in 2015.

Hoteliers in southwestern Turkey held a meeting last year to fight false complaints. Experts say the rise in those complaints are linked to claims management companies encouraging more customers to profit from compensations. All-inclusive hotels are the easiest targets for compensation as tourists tend to spend their entire holiday in the hotel, consuming hotel food only. U.K. laws order tour operators to pay for damages for affected tourists and operators in turn pass their costs onto the hotel. Sickness claims are profitable for lawyers who can recover their legal fees from the defendants. Turkey is among the "illness hot spots" on the website of sickholiday.com, which advertises itself as the "U.K.'s leading holiday sickness claim experts. "A large number of holidaymakers traveling to Turkey will fall ill due to poor hygiene and food preparation," a section on the website reads.

The increase in false claims was also brought to the attention of the U.K. Foreign Office, and it has included details in its travel advice for Turkey.

"You should only consider pursuing a complaint or claim if you have genuinely suffered from injury or illness. If you make a false or fraudulent claim, you may face legal proceedings in the U.K. or Turkey," the travel advice on the body's website reads.