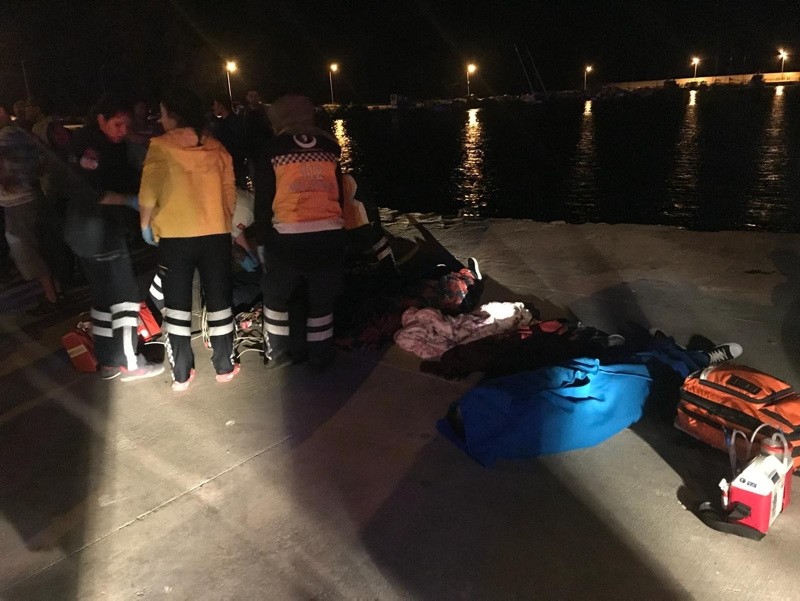 Seven Afghan migrants died and another 13 survived late Monday when a small boat carrying them from Çanakkale in western Turkey to the Greek island of Lesbos capsized. Three children were among the dead.

The incident is the latest tragedy to hit migrants seeking to reach Europe via Aegean Sea. Afghans had boarded 4.5 meter long boat from the coast of Ayvacık, a town in Çanakkale province. The Turkish Coast Guard took the survivors to safety while an Iranian smuggler who was among survivors was detained. Media outlets reported that the unidentified smuggler was only one aboard wearing life jacket.

Security forces intercepted another 31 illegal migrants in Ayvacık on Tuesday before they arrived on the shore to board a boat to Lesbos island.

The Turkish Coast Guard intercepted 4,214 "irregular migrants" en route to the Greek islands from Turkey's Aegean coast within the first three months of 2018. The figures show the crossings almost doubled compared to the same period last year, when 2,324 people were intercepted before and during the deadly journeys to the islands.

Once swarmed with dinghies packed with migrants, the Aegean Sea was relatively calm in the winter, compared to past years; however, migrants are still trickling in to the nearby Greek islands. The decline is largely thanks to a deal between the EU and Turkey signed two years ago.

Syrians refugees have long comprised the majority of migrants crossing over to Europe from Turkey, which hosts the largest Syrian refugee community in the world, at over 3.5 million. In 2015, crossings through the Aegean, where the Greek islets lie in close proximity of the Turkish shores, reached 91,611 in one year, excluding the number of those the Coast Guard could not intercept. A year later, Turkey and the EU reached an agreement to return the migrants taken in by Greece to Turkey, in exchange for receiving Syrian refugees settled in Turkey.

Turkey is nowadays concerned with a flow of migrants from Afghanistan although authorities are confident that the flow is on the decline. "We have been facing a wave of migrants, especially from Afghanistan, in recent months," Interior Minister Süleyman Soylu said last month at an immigration-themed meeting, noting that among the illegal migrants in 2018, 29,899 people were Afghan nationals. The interior minister also said Turkey arrested 4,641 migrant smugglers in 2017, while 1,328 were apprehended in the first four months of this year.

Experts link the surge in Afghan migrants to a rush of smugglers trying to profit more before the border wall on Turkey's east, main gateway for Afghans arriving through Iran, is complete, thus, dealing a blow to their business. Migrants say they risk death to avoid detection in their bid to reach Turkey to escape poverty and terrorism in Afghanistan. Some stay in border cities, others try to travel to big cities in the west and some take their chances traveling to Europe via Turkey.