Wounded Palestinians to be treated in Turkey, health minister says 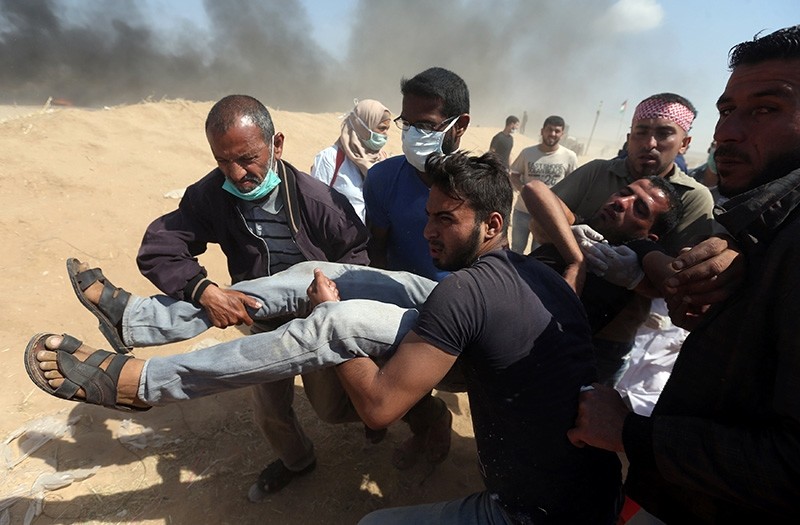 Wounded Palestinian demonstrator is evacuated during a protest marking the 70th anniversary of Nakba, at the Israel-Gaza border in the southern Gaza Strip. (Reuters Photo)
by Anadolu Agency May 15, 2018 12:00 am

Palestinians wounded by Israeli security forces during Monday's anti-occupation protests in Gaza will be treated in Turkey, said the country's health minister on Tuesday.

"We will receive the wounded from Gaza first in Ankara. We have prepared our hospitals according to the conditions of the wounded," Ahmet Demircan told Anadolu Agency in Ankara.

He said the ministry cooperated with the Emergency Management Authority (AFAD) and the Turkish Armed forces, where all preparations were in place to establish an air corridor to transfer the wounded in Gaza to Turkey.

Demircan said they would bring in the wounded Gazans as soon as the Palestinian side was ready.

He noted that those with the most severe injuries would be prioritized.

"On the Gazan side [of the border], the injured are at great risk because there are not enough medications and supplies where the Palestinians are," Demircan said.

Thousands of Palestinians gathered on the Gaza Strip's eastern border since early Monday morning to take part in mass rallies to commemorate the Nakba anniversary and protest the relocation of the U.S. Embassy from Tel Aviv to Jerusalem.

According to the Palestinian Health Ministry, at least 60 Palestinian demonstrators have been killed by cross-border Israeli gunfire in one of the deadliest single day massacres in the country's history.