Turkey wins battle for return of artifacts from Ohio 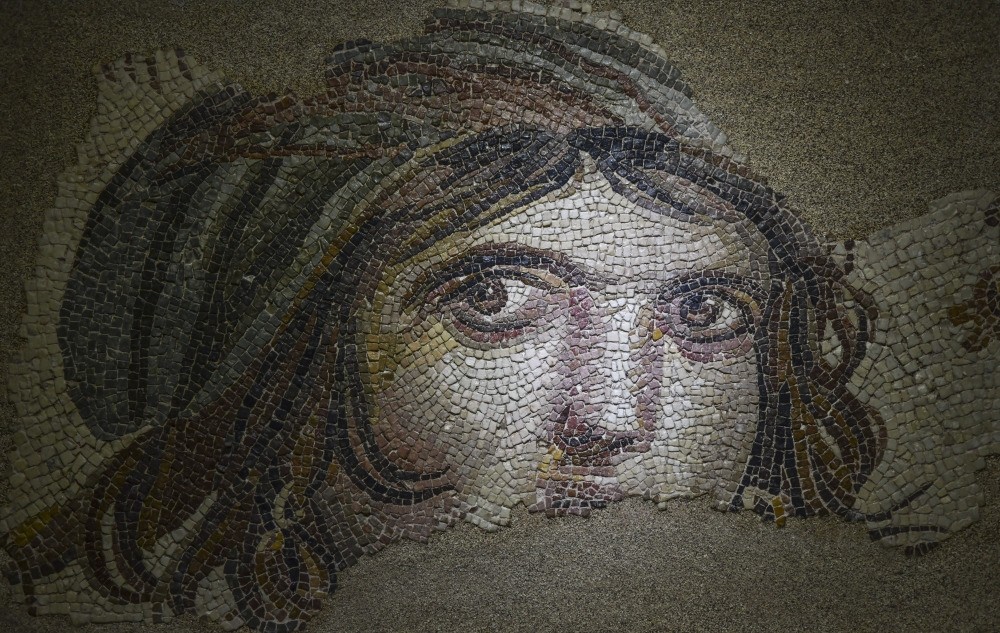 Gypsy Girl mosaic is on display at a museum in the city of Gaziantep. Pieces believed to belong it were installed at a floor at Ohiou2019s Bowling Green State University.
by Compiled from Wire Services May 16, 2018 12:00 am

After lengthy negotiations, Turkish officials have finally reached a deal with Bowling Green State University for the return of several pieces of a Roman-era mosaic. Smuggled from the country decades ago, the priceless artifacts will be delivered to Turkey later this year

Missing pieces of Turkey's world-famous "Gypsy Girl" mosaic will come home soon after officials signed a deal with Bowling Green State University in Ohio, U.S., where they were on display decades after they were smuggled from Turkey.

The Roman-era mosaic, which is also known as Zeugma - named after the ancient Roman city that is located in southern Turkey's Gaziantep today where it was found - had 12 missing pieces on display at the Ohio university's Wolfe Arts Center.

Turkey made its first attempt to recover the mosaic pieces in February 2012, but Bowling Green State University demanded reimbursement for the purchasing price - $260,000 in 2012 - or for 20 Turkish students per year, totaling 200, to be educated at their institution. Ministry officials declined both proposals, stating ethical objections and subsequent attempts to reach a settlement had failed.

Turkish and Bowling Green State University officials signed an agreement on Monday at Turkey's consulate in Chicago. Tülin Sermin Özduran, director of the Turkish Culture and Tourism Office in New York joined the university's president Dr. Rodney Rogers, the university's College of Arts and Sciences dean Dr. Raymond Craig and the university's vice president Sean P. Fitzgerald for the signing ceremony. The university administration said the pieces would be returned to Turkey later this year.

The pieces were smuggled abroad during illegal excavations in the ruins of Zeugma in the 1960s and were purchased by the U.S. university in 1965 for $35,000 from art dealer Peter Marks. They were restored and installed under a protective glass in the floor of Wolfe Center for the Arts that was opened in 2012. The same year, the Turkish Foreign Ministry applied to the university for return of the artifacts but the university conditioned to be paid for repatriation.

Gaziantep municipality will cover the costs to replicate the pieces, which will be exhibited at the Bowling Green. The city's mayor Fatma Şahin hailed the good news saying "Our girl will reunite with her family." Various mosaics, including the iconic Gypsy Girl, are on display at the 30,000 square meter Zeugma Mosaic Museum that opened in Gaziantep in 2011.

The Gypsy Girl's disheveled hair, prominent cheekbones and haunting eyes have become a symbol for the city amid a tourism campaign to attract more visitors to this city bordering with Syria. Şahin told Anadolu Agency (AA) that the museum used special lighting to highlight the missing pieces of the mosaic and it will now have "a more special place" at the venue after the return of the missing pieces. The mosaic is believed once adorn the villa of a local noble family and was discovered in the 1990s during excavations, long after smugglers looted the ruins of the ancient city. Its creator is not known, neither what the mosaic really depicts. Some scholars suggest that it likely portrays Gaea, the goddess of the Earth in Greek mythology.

Over 4,000 smuggled historical artifacts have been repatriated to Turkey between 2004 and 2016, as the country spends tremendous effort to prevent smuggling of historical artifacts. Many artifacts uncovered in Turkey are displayed in various famous museums throughout the world even if they were illegally smuggled out of the country. Legal procedures to retrieve these artifacts take a long time. Most recently, Turkey retrieved the statue of Heracles from Switzerland.