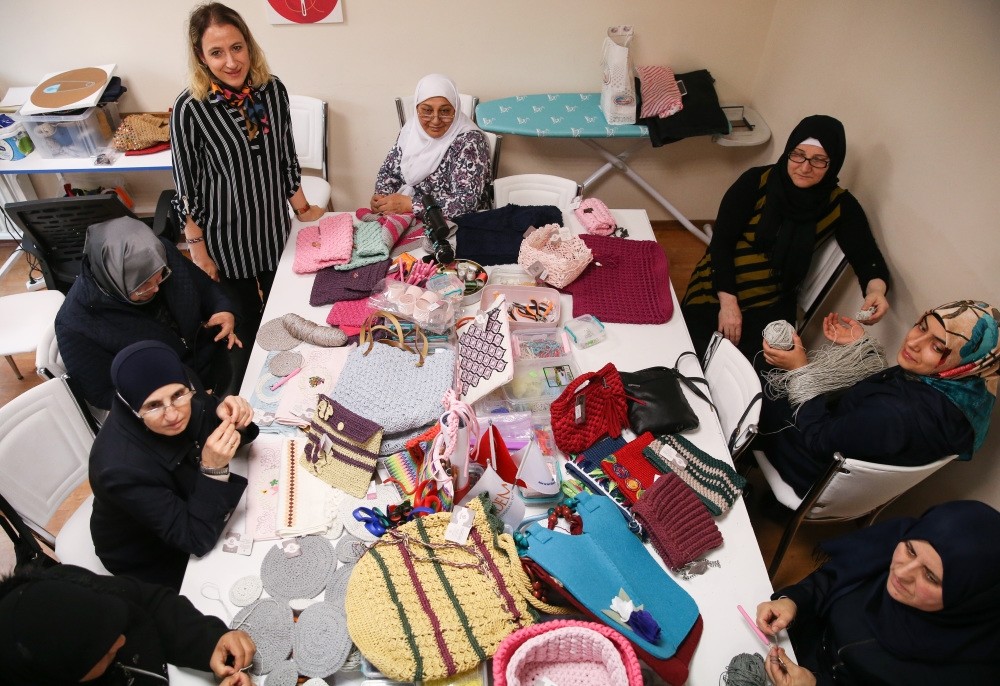 Their lives forever changed by the ongoing civil war in Syria, women of that country started over again in Turkey, a neighbor that embraced more than 3.5 million displaced by the conflict that erupted in 2011. A charity-run center in Istanbul that helped train them in new professions enabled them to create their own brand of handicrafts. Hayal, or dream in English, now helps women earn an income and sharpen their skills.

The Center for Refugee Women in Edirnekapı, Istanbul is run by Turkey's leading non-profit, Women and Democracy Association (KADEM), and the state-run Disaster and Emergency Management Authority (AFAD) that oversees humanitarian needs of Syrian refugees. The center offers services to refugee women, from social support to lifelong learning classes. One such class enabled them to knit whatever they wanted. Their labor of love soon turned into end-user products and inspired the idea to build a brand.

KADEM President and associate professor Sare Aydın Yılmaz said that women were provided with "social integration projects helping them to recover from the suffering they were exposed to" by the conflict. Handicraft classes are among the courses offered to help them acquire new skills and earn extra income for their families. "These women quit social life because of war and lost their self-confidence, their experience [back in Syria] and their economic freedom. They need to regain living standards they had in their country. They need a steady income to care for their family," she told Anadolu Agency (AA).

"We train them so that they can overcome obstacles, while adapting to their new lives here. We first taught them Turkish and then launched sewing classes as it is among the most common pastimes for women," she added. Sixty-two refugee women took knitting and sewing classes, and the women were soon able to create distinguished pieces, inspiring the creation of Hayal. It is now on sale in shops in Turkey and abroad.

Amal Greir, a 47-year-old refugee who arrived in Istanbul from Homs, Syria, nine months ago, is among the contributors to the new brand. Greir and her three children fled to Turkey after her husband's death while in detention by the regime forces. The family took shelter in an orphanage in Turkey. "I was a bit adept in knitting before but I improved here. I now have a profession. I can work elsewhere too. Hayal means hope for us," she says.

Nadia Hamik, a 50-year-old woman, arrived from Damascus. "I learned how to make handicrafts for the first time in my life. I have to work for my family. We had so many troubles in Syria, but I feel fine again here," she says.

Goufran Ashour, a 21-year-old, arrived in Istanbul from Damascus five years ago with her family. In her first year at Istanbul University where she studies to be a sciences teacher, Ashour spends her free time at the course. "I wanted to learn something on the side. Plus, I can earn some money," she says. Ashour accompanied Bushra, her elder sister, to the knitting and sewing classes. Bushra says she made a new circle of friends in the classes. "I met new people and learned a lot. This is a good way to feel like living again. We sell things we make and earn money for our families. I advise other Syrian women to attend these classes.

Women and children make up the majority of refugees, and they are also the most vulnerable among refugees. According to a KADEM survey of women refugees, 94.4 percent did not work in Syria and only 22.7 percent expressed willingness to join the labor force in Turkey.