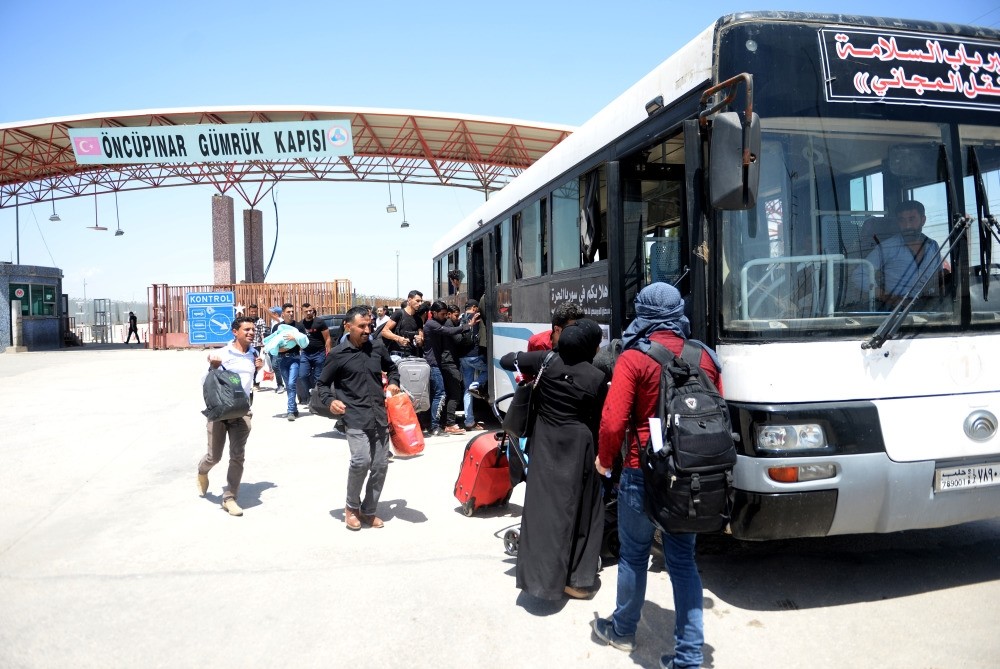 Syrians board buses that will take them to inner towns of their country after crossing the u00d6ncu00fcpu0131nar border crossing.
by daily sabah May 22, 2018 12:00 am

As Eid al-Fitr, a Muslim holiday marking the end of the fasting month of Ramadan, approaches, Turkey has reopened one of its border crossings with Syria to allow refugees from the conflict-ridden country to return home. Seeking to spend the holiday in their homeland, Syrians flocked to the Öncüpınar border crossing in the southern city of Kilis to travel home. The majority of refugees traveled to towns and cities liberated by the Free Syrian Army (FSA) backed by the Turkish Armed Forces (TSK).

Some 2,000 Syrians crossed into Syria yesterday morning. Elderly and disabled Syrians were given priority, while police officers helped them to walk to the Syrian side where they boarded buses. The crossing will be open until June 13 for holidaymakers who are required to register online for travel permits to the towns and cities of Azez, Mare, Soran, Aktarin, Afrin, Jarablus and al-Bab. Crossings are strictly monitored, while a mobile clinic has been set up at Öncüpınar for vaccinating children accompanying their families to the Syrian side.

Khalil Halo left Syria eight years ago when an uprising against the Bashar Assad regime escalated into an all-out civil war. He is among the more than 3.5 million Syrian refugees in Turkey - which currently has the largest Syrian refugee population in the world. His married daughter is among the relatives he left back in his home country. "I've missed her very much. She has given birth to three children and I've never met them. It'll be the first time they'll see their grandfather," the excited man told Anadolu Agency (AA).

Ismail Hajhassan was separated from his newborn son and family two years ago when the family split up to flee the violence in Syria. He will now reunite with them "thanks to the Turkish state." "We are grateful that they cleared our towns of terrorists," he says.

Many returnees had been living in areas controlled by Daesh or the People's Protection Units (YPG), an affiliate of the terrorist group PKK, in Syria's northern regions bordering with Turkey. Turkey cleared an area of 4,000 square kilometers from the two terrorist groups in operations in 2016 and this year by helping the FSA weed out terrorists from al-Bab, Jarablus and other towns in Operation Euphrates Shield and Afrin in Operation Olive Branch.

Öncüpınar and other border crossing Cilvegözü will reopen between June 26 and July 6 for Syrians to return, eleven days after the start of Eid al-Fitr.

Since the start of the Syrian crisis in 2011, Turkey has been at the forefront of helping Syrian refugees. It has spent some $30 billion for their care in modern camps and for aiding those living outside the camps. Although it pursues an open-door policy for refugees, the country is also concerned about the increasing burden of caring for the refugees with no end in sight to the conflict. Ankara is among the proponents of an idea of setting up safe zones within Syria both for those internally displaced as well as refugees in other countries.