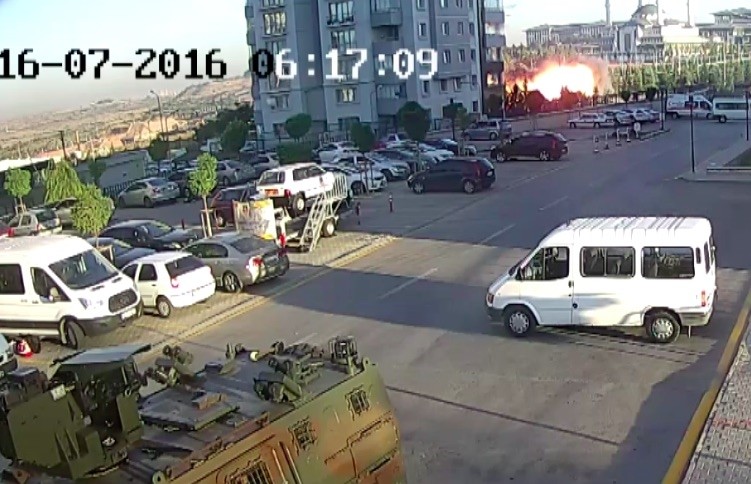 A screenshot of security camera footage shows a fireball rising from a place bombed by putschists in the early hours of July 16, 2016.
by Daily Sabah with AA Jun 03, 2018 12:00 am

State media outlet Anadolu Agency (AA) has obtained fresh footage that shows a military aircraft piloted by putschists carrying out attacks near the presidential complex in Ankara during the deadly coup attempt on July 15, 2016.

The security camera footage reveals how the pilot hits the intersection near the complex with two bombs in two minutes on the night of the defeated coup, blamed on the military infiltrators of Gülenist Terror Group (FETÖ).

In the footage, flames and fumes are seen rising after the bombs are dropped. It also shows windows of the General Command of Gendarmerie headquarters, located far from the presidential complex, shatter due to the explosion. The images and an expert's report were sent to Ankara 23rd Heavy Penal Court.

The presidential complex and General Command of Gendarmerie headquarters bombings killed 29 and wounded dozens of civilians.

Thousands were detained or arrested after the coup attempt was foiled by a strong public resistance. FETÖ, led by US-based Fetullah Gülen, is accused of orchestrating the coup attempt by ordering its followers in the army to seize power.

President Recep Tayyip Erdoğan was not in the presidential complex at the time of the coup attempt. He was on vacation in a southwestern town that night and putschists sent a team of assassins to kill the president. Erdoğan managed to escape at the last minute and secretly flew to Istanbul where he held a rally and mobilized the public to confront the putschists.