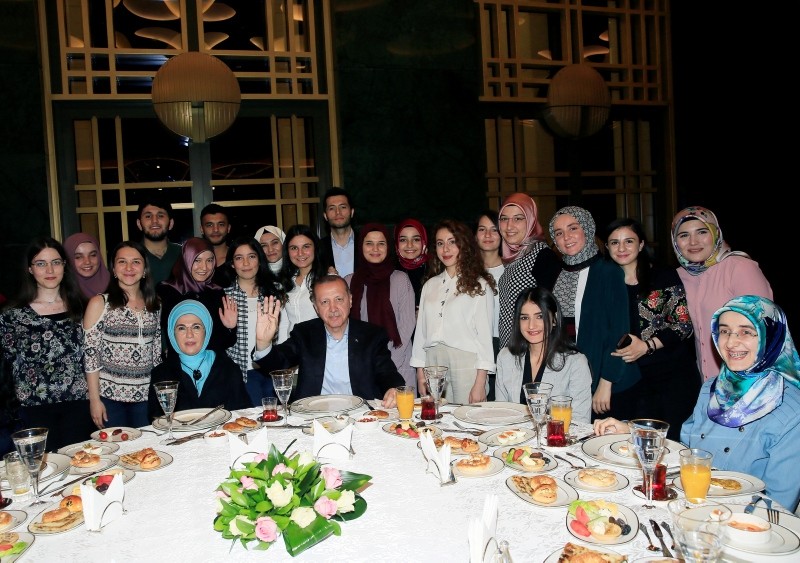 In a tweet late Wednesday, First Lady Emine Erdoğan invited students to the presidential complex for a suhoor meal.

"Last week, Mr. Tayyip was a guest at a student dormitory. This time, we will have suhoor at the Kulliye," she said in her tweet, with a note adding that there would be 'positive discrimination towards women' when choosing the invitees.

Speaking to the students during the event, President Erdoğan criticized the Republican People's Party's (CHP) presidential candidate Muharrem Ince and said his promise to appoint all teachers was "unrealistic."

"We appoint 30,000 teachers every year. We will continue to appoint them to available posts depending on rising demand and the addition of new classrooms. But saying that 'everyone will be appointed' is a lie."

Last week, Güngör Atak, who is a student at the Ankara Yıldırım Beyazıt University's Faculty of Dentistry, messaged the president on Twitter, inviting him to join the students for a pre-dawn meal at their dormitory.

"I am coming if your tea is ready," the president responded. In a later tweet, the president posted a video of the meal he had with the students at the facility.

To prepare for the fast, Muslims eat what is commonly called "suhoor," a pre-dawn meal of power foods to get them through the day.

Millions of Muslims around the world fast during the month of Ramadan, which is considered to be the holiest month in Islam, consisting of intense prayer, dawn-to-dusk fasting and nightly feasts.