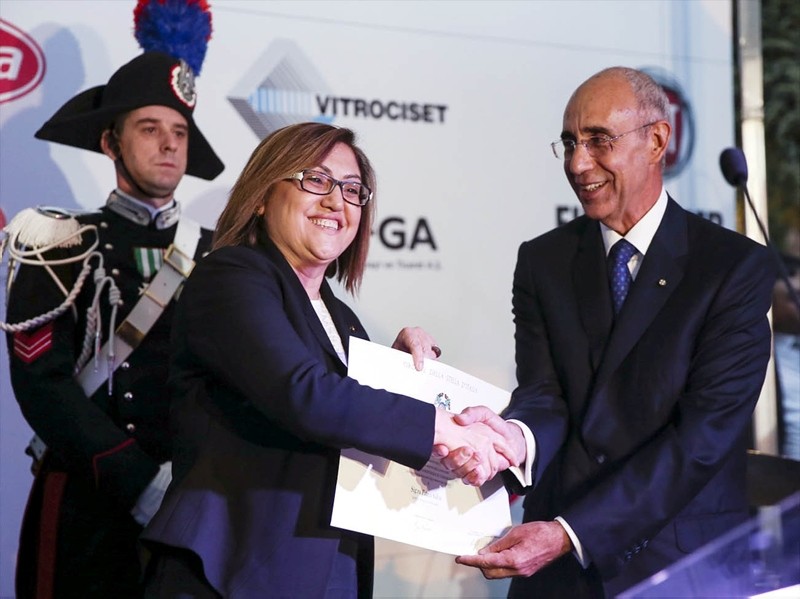 The Italian Authority bestowed the Order of Merit of the Italian Republic to Fatma Şahin, the mayor of the Gaziantep Metropolitan Municipality and former minister of family and social policies, for her work towards helping women and children.

Şahin received the medal - the highest ranking honor of Italy- in a reception held by Ambassador Luigi Mattiolo in the Italian Embassy in Ankara on Wednesday. In her acceptance speech Şahin dedicated the medal to "Anatolian women."

"We are working with Italy to bring back the cultural legacy of the late Hittite civilization. Our city already has five ancient Hittite cities and we are undertaking a very large restoration project. We will unveil our Aqua Park together with Italians. Don't look far, come to Gaziantep," she said.

Italian Ambassador Mattiolo also stressed the importance Turkish-Italian relations: "Our countries are facing struggles no country can face alone. Immigration, war on terror, the need to expedite economic growth and social progress are just some of these of problems. The need to fix these problems pushes us to cooperate in every possible way."

Last year Şahin became the first Turkish woman to be awarded Italy's Minerva Prize for her and her city's embrace of refugees from war-torn Syria. The prize is a tribute to late journalist Anna Maria Mammoliti and is under the auspices of the Italian Presidency.

In 2016 Gaziantep was also nominated for the Nobel Peace Prize for its role in helping Syrian refugees.

Şahin has made a reputation for herself by getting elected as a deputy for three terms in a row. She was first elected as a Gaziantep deputy from the ruling Justice and Development Party (AK Party) in the 2002 elections and then in the two consecutive elections of 2007 and 2011. Having served as the family and social policies minister between 2011 and 2013, she also became the first female minister from Turkey's predominantly conservative southeastern Anatolian region. Şahin quit her post in late 2013 to run for mayor in the 2014 local elections, which she won with 51.7 percent of the votes. Since then, she has been praised for her successful work in Gaziantep, dubbed as one of the "Anatolian Tigers" with a booming economy since the 1980s.