In the aftermath of arrests, Turkey hints at response to Israel 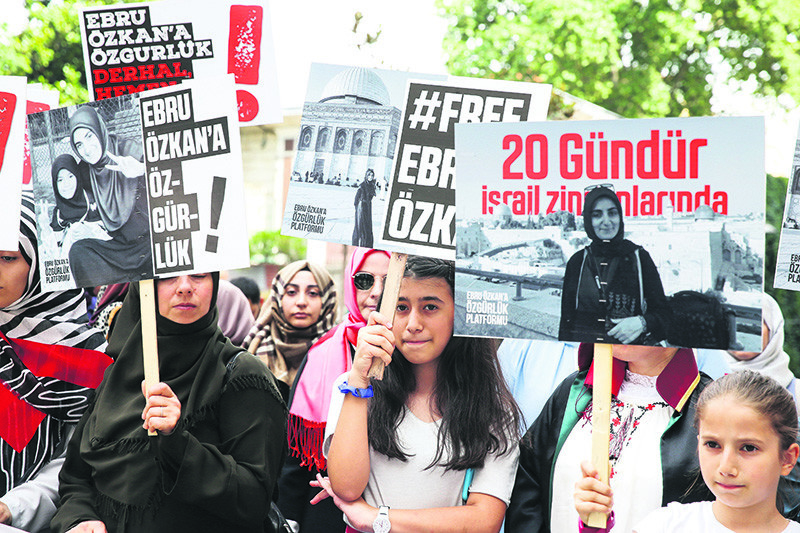 People hold placards with slogans reading ,Free Ebru u00d6zkan, and photos of u00d6zkan during a rally calling for her release in Istanbul on June 30.
by daily sabah
Jul 07, 2018 12:00 am

Israel's intimidating policy towards Turkish tourists, some of whom have been arrested while visiting the country on baseless allegations, angered Ankara with Foreign Minister Mevlüt Çavuşoğlu saying Israel ‘forced' them to ‘take countermeasures'

Ebru Özkan was the latest victim of the arbitrary detention policy of Israel towards Turkish citizens. The 27-year-old woman, one of many Turks seeking to visit Jerusalem where sacred Muslim sites are located, was detained on June 11 at Tel Aviv's Ben Gurion airport moments before she was to board a flight to Turkey. Since then, she remains in detention with a court extending her detention period for another six days on Tuesday.

Speaking to Anadolu Agency (AA) on Friday, Turkish Foreign Minister Mevlüt Çavuşoğlu condemned the arrest and implied that they would respond to the arrest of Özkan though he did not elaborate. Turkish citizens visiting Israel already complain of random, arbitrary detentions at the airports and hours of interrogation by security forces, despite perceived improvement in relations between Turkey and Israel after a bitter row.

"For genuine normalization of our relations, Israel should end its wrong policies and its inhumane cruelty. We are aware of their treatment towards some Turkish citizens. Lately, they extended the detention of our sister Ebru Özkan. They should not force us to take a step to counter it. We will not exert pressure on civilians but if Israel takes steps to deter our citizens from visiting Jerusalem, we will give a response to them. Our relations will only normalize once Israel ends these inhumane, wrong policies," the Turkish foreign minister said.

Özkan was arrested on charges of threatening Israel's security and links with terrorist groups, allegations which she denies. She was among 38 Turkish tourists on a trip to Jerusalem. Her friends dispute Israel's allegations and say she was simply there to visit Al-Aqsa Mosque in the city. Like other Muslims, she spent a night at the mosque by reciting and performing prayers at the third holiest site of Islam. Osman Hazır, another Turkish national, was arrested by Israel after he took a selfie while holding a Turkish flag at the same mosque in January. One month before that, Israeli police barred Abdullah Kızılırmak and Mehmet Gargılı from entering the holy site and subsequently arrested them, also in December 2017, Adem Koç, another Turk, was arrested inside the mosque compound. All three were charged with disturbing the peace and taking part in an illegal rally and were later released on bail.

Çavuşoğlu says that although the two countries restored ties after the Mavi Marmara incident, Israel kept its aggressive stance. Nine Turkish activists aboard the Mavi Marmara aid vessel, part of a flotilla traveling to the Gaza Strip to deliver humanitarian aid, were killed on May 31, 2010 when Israeli troops stormed the vessel at sea before it reached the Palestinian territories. The incident brought relations between the two countries to an all-time low. After a lengthy process of negotiations, Ankara and Tel Aviv reached an agreement to restore ties in 2016 after Israel agreed to pay compensation for the Mavi Marmara victims.