"Everyone was laughing; even I laughed when I first saw him," two-year-old Muhammet Turan's father told reporters after firefighters rescued his son from a pressure cooker he was stuck in. 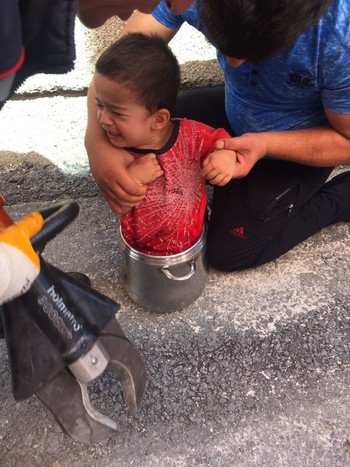 Muhammet, who lives in the central Turkish city of Çorum, did what most toddlers do while their parents sleep: Explore the house and make a mess of it. A pressure cooker he found in the kitchen was apparently a fine place for the youngster to dive into. He stepped into the small vessel with its lid missing, but failed to get his chubby feet and knees out of the cooker. His parents woke up to the shocked toddler's cries. The family immediately called emergency services, and firefighters were sent to remove Muhammet from the pressure cooker. After about 30 minutes of cutting and bending the cooker, firefighters managed to rescue the boy.

"I was puzzled at first. How can a baby get into a pressure cooker? I was shocked. We tried to save him first by ourselves but failed. I didn't want to hurt him, so I called the fire department," he told reporters as he still tried to comfort the toddler who occasionally sobbed. The father thanked the firefighters, including one who injured his finger while trying to cut off the cooker without injuring the boy. "I would've kept the cooker so that I could show it to Muhammet when he grows up, but someone apparently took it when we left it outside the home after firefighters cut it," the father added.