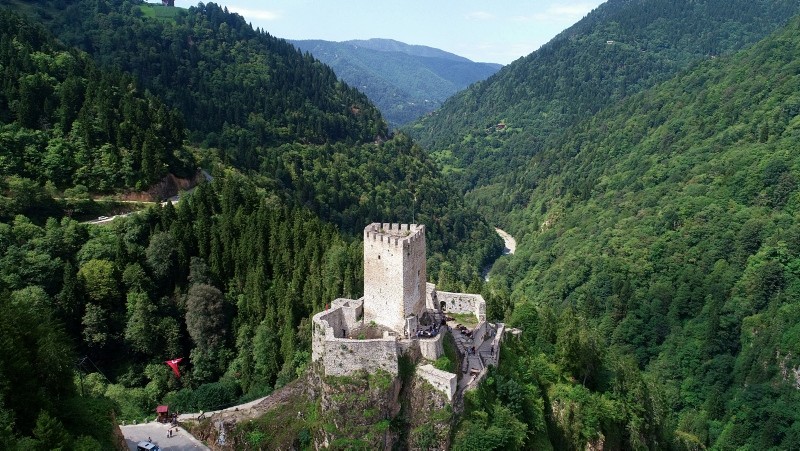 Since it's restoration in 2008, the medieval Zil Castle in Turkey's Black Sea region has proven to be a popular attraction for both local and foreign tourists.

Located in Rize's Çamlıhemşin district and situated at the edge of a cliff in a first-degree archeological and natural site called Çat Valley, also known as Fırtına Valley ('storm' in English), the castle sits 750 meters (2460 ft.) above sea level, mesmerizing visitors with its stunning view.

Estimated to date back to the 14th century and restored by the Turkish Ministry of Culture and Tourism in 2008, the castle includes a guardhouse, a chapel and a main tower.

Used by the Ottoman Empire for military purposes after the region was conquered, the castle's main purpose was to ensure the security of an important medieval trade route.

With other tourist attractions such as canoeing, rafting and recreational facilities nearby, the castle has seen an increase in visitors over time and has become a popular pick for tour operators after hosting a concert by Turkish pianist Tuluyhan Uğurlu.

"Usually, castles are built on the highest spots near cities. But this is the first time we have seen a castle nested in nature," said Burhan Karakaya, speaking to Anadolu Agency (AA).

Karakaya, who travelled from Konya to visit the castle with his family, said he noticed that the majority of the tourists were foreigners. Calling the place a natural wonder, he advised for everyone to visit the region.

Another local tourist, Selami Aktay said he was happy to visit such a historic and beautiful place. "This place is indisputable in terms of natural beauty," he said and added that hidden in the forest, the castle looked like "an eagle's nest."

Recommending anyone thinking about visiting the place to do so, Aktay said that it seeing it in real life was something else. He also added that he would visit the castle again with his family.

Visiting the castle with his friends, Serdar Beşiroğlu from Düzce province said that they were impressed by how untouched both the castle and the surrounding area were.